This Cell Phone Footage Of A Head On Collision Is Absolutely Incredible – Everyone’s OK, But Three Cars Get Totaled 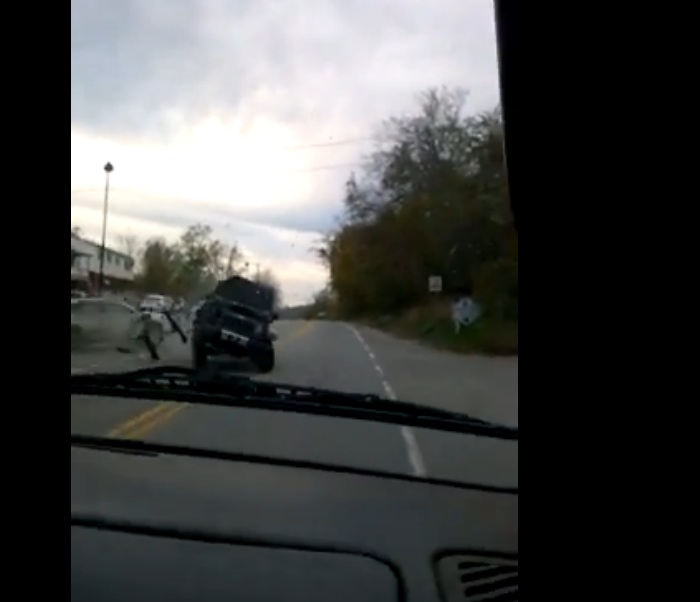 The Jeep that looks as though it is careening out of control directly at you in the lead photo is actually careening out of control right at you. That is a screen capture taken about three tenths of a second before that Jeep piles directly into the front of the pickup truck where the guy filming is sitting. This is among the scariest things we have seen in a long time and even though we’re telling what’s about to happen, you’ll nearly jump out of your chair when you actually experience it. This is what it is like to he in a high speed head-on wreck and it all happens very, very quickly.

To set a bit of the backstory, the guys in this truck were filming a driver they thought was drowsy as they weaved and drifted their way down a country road, presumably heading home. After a close call or two the guys were keeping their distance but also kept filming as the driver of what looks to be a small Jeep SUV decided to put on the left signal to turn. At an intersection just before the crest of a hill the Jeep driver begins to make a lazy left when all of a sudden a Jeep comes over the hill and has nowhere to go but right into the formerly sleepy driver. That Jeep glances off the car it just T-boned and comes full bore at the guys in the pick up. They have time to scream just before the airbags ignite and save them from what would have surely been a fatal accident in an older car or truck. The impact is absolutely tremendous.

There’s a little post wreck video where the pickup guys are talking to the other people involved but the moment of impact here is amazing. We watched this thing about 10 times. Just incredible and very, very scary.

MORAL OF THE STORY: BE CAREFUL OUT THERE!

Funny Videos: Doing it Wrong But Oh So Right on the Autocross This 1966 Wolseley Hornet MKII Is A Factory Spruced Up Mini And We Think It Needs To Be Hot Rodded

3 thoughts on “This Cell Phone Footage Of A Head On Collision Is Absolutely Incredible – Everyone’s OK, But Three Cars Get Totaled”