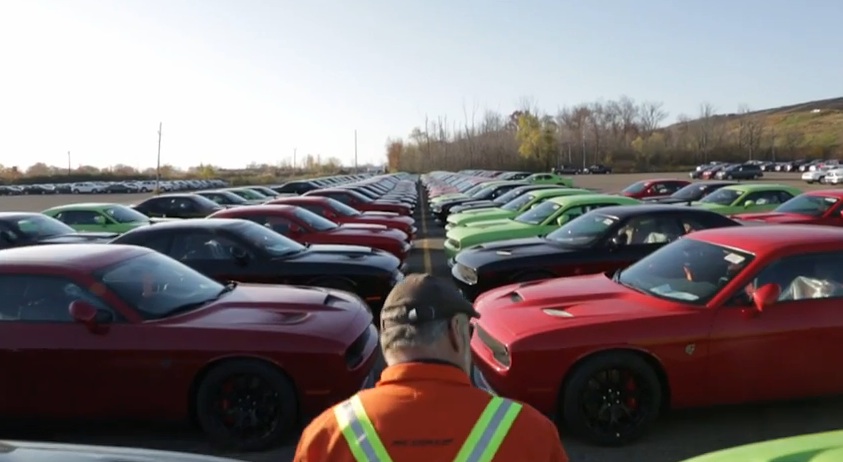 Hellcats are officially in route to dealers all across North America as Chrysler announced yesterday that the first run of the cars had been released and sent out into the field. This means that we are just days away from (a) the first Hellcat wreck photos (b) the first shops drag strip testing them and (c) the first one of them being stolen. We’re kidding of course (although those three things will happen!) but the good news for the thousands of people who have ordered the cars is that their automotive dreams are steaming ever closer to their garages. 4,500 people ordered Hellcat Challengers within the first couple days that availability was announced. That was far more than Chrysler claimed that they expected to order but they have stuck to their schedule thus far and the 707hp, 11.2-second street tired monsters are ready to make their owners happy.

In honor of this momentous occasion, Chrysler made a cool video that features the truckers that are hauling the cars to their dealerships from the company’s Brampton plant where they were built. It is a pretty fun watch if not a little more dramatic than what normally goes on there in the shipping lot we suspect. The reality is that for about $60,000 the Hellcat is a killer deal for the performance and everyone that we know who has driven one (not us yet!) has truly loved the car and claim that they are blindingly fast.

We’ve got the video below and under the video the full release from Chrysler.

November 13, 2014 , Auburn Hills, Mich. – The wait is over. The highly anticipated new 2015 Dodge Challenger SRT Hellcat with its supercharged whine is about to roar into Dodge dealerships across the United States.

Dodge and SRT received more than 4,500 orders for the new 2015 Dodge Challenger SRT Hellcat in just the first five days after orders opened in September. Those 707-horsepower muscle cars are now leaving the Brampton (Ont.) Assembly plant where they were built and making their way to Dodge customers across the country.

“The introduction of the new 2015 Dodge Challenger SRT Hellcat has ignited the general market’s interest in the muscle car segment,” said Tim Kuniskis, President and CEO, Dodge and SRT brands.  “The reaction from our customers and the general public has been beyond even our positive expectations, and we will work to build a Challenger Hellcat for every customer who wants one.”

The 2015 Dodge Challenger SRT Hellcat is the fastest muscle car ever with a National Hot Rod Association-certified ¼-mile elapsed time of 11.2 seconds at 125 miles per hour (mph) with stock Pirelli P275/40ZR20 P Zero tires. With drag radials, the ¼-mile run dropped to just 10.8 seconds at 126 mph.

The fastest muscle car ever is also the most powerful muscle car ever, thanks to the Challenger SRT’s HEMI Hellcat, which delivers an unprecedented 707 horsepower and 650 lb.-ft. of torque. The 6.2-liter V-8 is also the first factory-built supercharged HEMI.

Equipped with Chrysler Group’s segment-exclusive TorqueFlite eight-speed automatic transmission, the new Challenger SRT Hellcat has earned a highway fuel-economy rating of 22 miles per gallon (mpg) from the U.S. Environmental Protection Agency (EPA). Not to be outdone, the Challenger SRT Hellcat earns an EPA highway rating of 21 mpg when equipped with the new-for-2015 six-speed manual transmission.

In addition to the awe-inspiring horsepower, the new 2015 Dodge Challenger SRT Hellcat has been redesigned and totally re-engineered to be the most true-to-form muscle coupe on the market with performance-enhancing technologies inside and out, including the new TorqueFlite eight-speed automatic transmission or six-speed manual and an all-new interior inspired by the classic 1971 Challenger.

NHRA Announces 2015 Heritage Series Schedule Cruise Coverage: The First Ever Costumes and Cruise In For A Cure - Great Cars And A Great Time