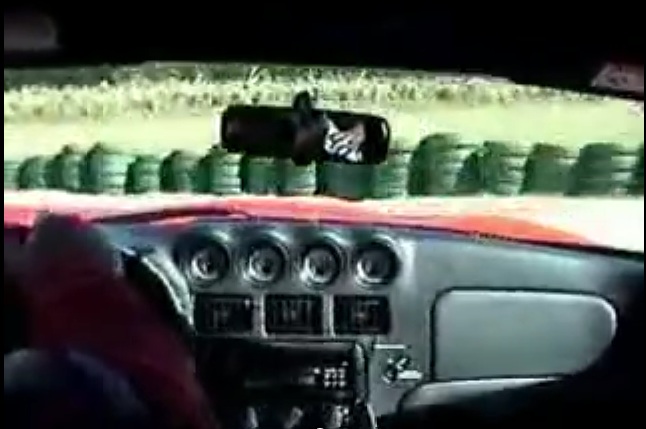 Frozen in time, the image above does not seem to be all that scary. Heck, what’s there to be afraid of when looking at a wall made of rubber tires, right? Put that image into the actual context of the moment though and everything changes drastically. This footage is among the scarier things we have seen lately and it was actually taken about five years ago…or at leas that is when it was posted.

We’d list brake failure as the top thing on our list of horrifying automotive possibilities. This video is the perfect example of how a multitude of things can stack up on you in a perfect storm of awful. Take a big horsepower Dodge Viper that is hauling ass down a straightaway and send it into a very hard left hand turn with no brakes. The result is stunning.

We think that this driver is at a school of some sort as there is a passenger who appears to have a helmet wired to communicate with the driver. He makes a feeble attempt at grabbing the gearshift or the hand brake at one point, but the big Viper just bulldozes it way off the track at an extremely high rate of speed and hurdles toward a wall. The impact is beyond huge and the in-car shot makes us pucker every time we see it.

I have had “no brakes” in two situations during my driving life. One was in a loaded truck where I literally went through an intersection with the pedal on the floor and by the grace of the heavens I did not get into an accident with an innocent person who was minding their business. The other time was actually years earlier when I was driving my (now) wife to high school and the brakes went out on my Monte Carlo. I was able to use the krusty emergency brake that time. Here, there is time for none of that. The car is absolutely flying down the straight and before anyone really gets a sense of how bad this is, things go crazy. The airbags and modern construction of the car certainly helped this from being worse. Both men are moving under their own power when the video stops. We have to believe that the Viper is mangled all to hell.

PRESS PLAY BELOW AND WATCH A VIPER EAT TIRES HARD!

This Lawn Tractor With A Rotary Engine Is The King Of Overpowered Yard Equipment Goodwood Fun: Here's 10 Wild, Weird, and Bodacious Touring Cars From Goodwood Over The Years That You Forgot About