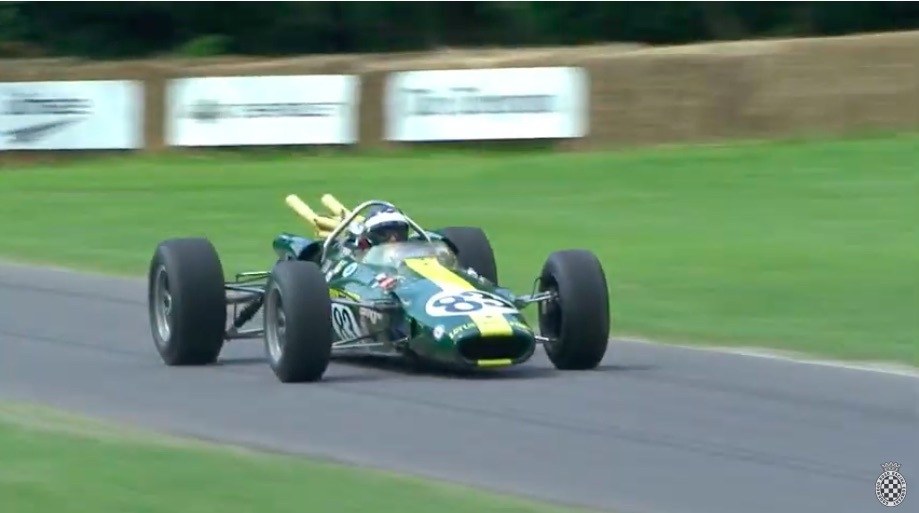 The Lotus 38 was not the first car in the history of the Indy 500 to place the engine behind the driver’s head but it was the first to win with that configuration and it touched off the massive sea change at the event that has lead us to where we are today and what we’re looking at for this weekend’s running of the historic race at the Brickyard. You will see the awesome off-set racer rolling up the hill at Goodwood with Dario Franchitti behind the wheel.

What an experience that had to have been for him. Sitting in the seat occupied by his late countryman Jimmy Clark, a man considered by many to be in the top ten of racing drivers of all time and someone who he undoubtedly has admired from afar.

The engine with its bundle of snakes headers is the awesome little Ford Indy combo that would be a factor for a few years at the speedway until the mighty Offy, now relocated to the rear of the race cars would once again regain supremacy at the Speedway with turbochargers.

This right here is fantastic. The car, the man, the legacy, and the fact that this weekend we’ll be watching its latest evolution. The one that started a new era!

Hagerty Redline Rebuild Time: Davin Pulls Down A Mystery 440 Destined For A Project Car Get Your Goat: This 1970 US Army Gama Goat Is Running, Driving, and Pretty Awesome