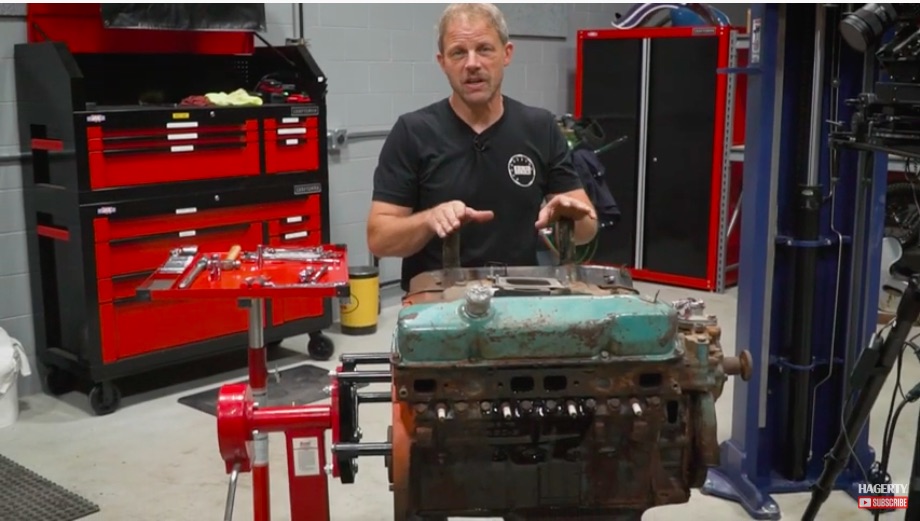 We love us some Hagerty Redline Rebuild series around here and there’s a new one coming. How do we know? This behind the scenes video that shows him pulling down a 440ci Chrysler big block that will eventually end up in another project car is the proof. This is a neat kind of video because while it stops every now and again to talk about some of the stuff that Davin is finding, it splits the difference between the stop action fun of the actual Redline Rebuild series and a full step-by-step teardown.

This engine is kind of interesting in the fact that it was rebuilt before and seemingly done the proper way with a fully balanced rotating assembly. The numbers have not been run, so to speak so there’s no indication if the thing has been bored (we’re guessing it has). The engine wears two different heads which is interesting. They both spec out to be effectively identical so this was likely a machine shop that had some inventory and perhaps discovered a crack in one of the original heads and offered their customer a more budget friendly option of replacing it rather than remedying it. The engine also seems to have a deeper sump pan than stock. Keep your eyes peeled for that!

This is a good look into the next Redline Rebuild engine. If you are into Mopars, here you go!

Holy Rocks: A BangShifty Look At The Evolution Of How Man Learned To Drill Rock Full Throated History: Watch The Legendary Indy 500 Winning Lotus 38 Run Up The Hill At Goodwood