Holy Rocks: A BangShifty Look At The Evolution Of How Man Learned To Drill Rock 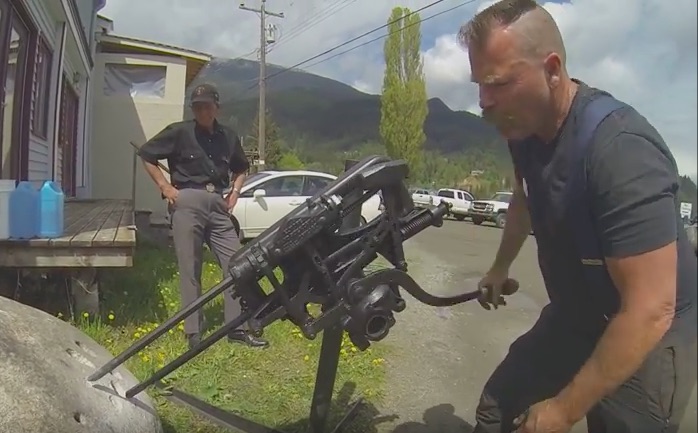 Mastering the world around us has been a constant quest of mankind since the first quasi-humans started grunting at each other and living in caves. Rocks have always provide an amazing array of challenges for people. Whether we’re talking about moving them, tunneling through them, or breaking them to our advantage, rock in all of it various forms has been a tough customer. Even with today’s technology it is an expensive and pretty arduous process to form hardened Earth into the shapes we want or move it the heck out of the way so we can proceed in the direction we want to with a road or other project.

The bottom line is that we do have the technology to do it and we can do it quicker than any generation before us has been able to. But how? Where did we gain the ability to accurately fracture rocks that are many thousands of times larger and more significant that us puny humans?

Through a series of awesome and different videos below we’re going to show you how men have attacked rock in the past and how they attack it today. The fun part is that some of the videos were taken at competitions where the old ways are celebrated and kept alive much to the delight of crowds and to the muscle soreness of the competitors. This isn’t about clearing rocks, this is about drilling rocks and the reason that the ability to drill them was (and continues to be) so important is because with a series of holes drilled to an engineer’s specs, rocks can be dynamited in specific ways, split in specific ways, and managed for different uses. Before drilling, simply trying to blow up rocks with dynamite was a favored method but it was horribly inaccurate. Placing the dynamite into the drilled holes and concentrating the explosion into a specific area? That was the win and it is pretty easy to understand why.

So now that we have some of the basics out of the way, let’s look at the evolution of drilling rocks. This is BangShifty history!

You’ll be seeing a familiar theme throughout the story regarding the names of some of the technology and drilling methodology used and that’s the fact that the word “Jack” appears in virtually all of it. Whether we’re talking about Single Jack, Double Jack, Jackleg drills, or Jackhammers, it is ever present and for good reason. “Jacks” were the hard-nosed and very talented Cornish drillers who emigrated in large numbers from England and took up where they left off in their homeland.

Scores of men had been mining through rock in England for centuries before the Gold Rush and other activities really sparked the activity in the American west during the 1800s and most of them were Cornish. With their own industry at home struggling many pulled up stakes and came to the United States to make a better future. The basis of the nickname is a bit cloudy but one tale is that so many of the guys would approach mining bosses and tell them that they had a cousin Jack at home looking for work that it began to stick. Another is that Jack was the most popular name in Cornwall and a higher than average percentage of the men were named as such, causing others to refer to all of the drillers as “Jacks”. And yes, this is how the Jackhammer got its name.

We start as you likely thought we would. The simplest form of drilling is called Single Jack drilling and it was the mainstay of the mining industry for many, many years. As you will see it is back breaking and physically exhausting work. The tools are very basic. A 4lb sledgehammer and a steel chisel were all the man had and after that it was up to his strength and will to continue on. The miner would strike the chisel and as he was rearing back for the next stroke he would rotate the chisel 90-degress and wail it again. Imagine performing this job for 8-10 hours at a time above your head or horizontally! Oh, and if you were deep in a mine you were doing it by candle light. The job was also pretty filthy as water was used as an agent to keep the holes from filling up with dust and stone chips.

The purpose of this was to make a hole that could be filled with gun powder and the explosion of the gun powder would blow the rock apart and the chunks would be carted away with hopefully whatever the desired stuff was inside. Maybe it was iron ore or gold. In other applications many miners would make many holes which would be filled and ignited thereby creating a rudimentary shaped charge to blow a rock apart.

Single Jack drilling competitions became common in the western part of the USA in the early 1900s and continue to be poplar today. Back in the 1900s, massive guys with arms like tree trunks would compete for big cash and prizes. It was a point of pride to have their miners win these competitions so mining company owners made sure that there was some real incentives to the best men to put forth their best effort.

Of course if there was Single Jack drilling, Double Jack drilling seems to be a fine natural progression, right? In the Double Jack method the ante is upped in the people and hammer department. Instead of the small 4-lb sledge used in Single Jack the striking hammer was now 12-lbs and had a long handle on it. In this operation the two jobs were known as “driller” (guy swinging the hammer) and “shaker” guy holding the steel chisel. The driller’s job was to whack the steel accurately and not break the hands of his working partner. The shaker’s job was to rotate the steel 90-degrees and while we’re not sure, loudly beg the other guy not to explode his hands like a China vase. The guys would switch positions between the two jobs and continue along uninterrupted. As we understand it this method was favored when the holes had to be drilled deeper (like two feet) into the rock. Unlike the guy who had to hold a railroad spike, the “shaker” was not just there to get the work started but had to hang in the whole time, lying on the rock.

While Double Jack drilling certainly picked up the pace and advanced things there was still a lot of room for improvement. The injuries caused by this activity between the crushing hammer blows, rock chips in the eyes, and other stuff left lots to be desired. Human beings are pretty crafty so after we see each other struggling to do something manually for many years we get to thinking of ways to accomplish the same work with less effort. Mechanical drills started to get developed in the early to middle 1800s and the examples shown below are awesome because they are literally mechanized hammers. That don’t really advance the technology of what’s happening but instead completely replace the people involved.

Operating any of these drills for a shift would be about as arduous as actually drilling the rock with a hammer and a chisel! That being said, the advancements on the safety side alone were massive and the speed side had to have improved as well. It is not like running a knife through butter but the speed in which the chisel is struck and rotates certainly seems multiple times quicker than even the Double Jack teams could replicate. Here are a couple examples of mechanical hammer drills.

The next advancement from the mechanical drills above was the introduction of the Jackleg Drill and this really changed things. The mechanical hammer drills were kind of a historical stop gap to get us to the Jackleg and the reason we can say that is that Jacklegs are still used in some applications today but not as commonly as they once were. What’s a Jackleg Drill?  It is basically an air powered and far stronger version of the mechanical hammers above but packaged in a much more manageable size and equipped with a hydraulic leg that a driller could use to control the height and angle of the drill and then use the power of the leg to force the drill into the rock he was boring holes in. These drills could penetrate to depths and at speeds no one had thought of before. The deeper the drill went, the more dynamite could be used, the more ore that could be brought to the surface in one shot, etc. The faster they could do the drilling the more ore could be pulled out of the rock face and the whole process would start again. These drills came into vogue in the middle to later 1800s as best we could tell. While they have been refined over and over again they operate on much the same principle. A Jackhammer is another version of this tool minus the leg and some other elements. The sound will be very familiar to you.

Imagine a fleet of these things all working underground in the same mine. It had to have been deafening. While these machines made life “easier” for drillers, it was still back breaking and very dangerous work. Like for the manual drilling, there’s a competitive spirit and there have been Jackleg drilling competitions for as long as the equipment has existed. The continue into modern times. Here’s some video to prove it!

So that brings us today and the current pinnacle of human rock drilling advancement, the drilling jumbos. The machine below is built by a company called AMV and it is beyond incredible. Theres a very comfortable cab for the operator to sit in, three different drilling arms that he can move and maneuver to where he wants them and more technology than the space craft that originally took men to the moon. From a mere hammer and chisel we have advanced to this behemoth that will do in hours what it would have taken skilled teams of men weeks and months to accomplish 150 years ago.

Drilling holes into rocks may be among the most basic activities that human beings engage in but it is a vital one for our harvesting of the Earth’s resources. By looking at such a simple activity and seeing how we have advanced the technology of doing it, we really get an idea of how we learn and how the human thought process works. All of the changes are incremental with some increments being larger than others but the beauty of seeing this monster below is that it is literally the accumulated knowledge of people that have been banging on rocks for hundreds if not thousands of years.

3 thoughts on “Holy Rocks: A BangShifty Look At The Evolution Of How Man Learned To Drill Rock”