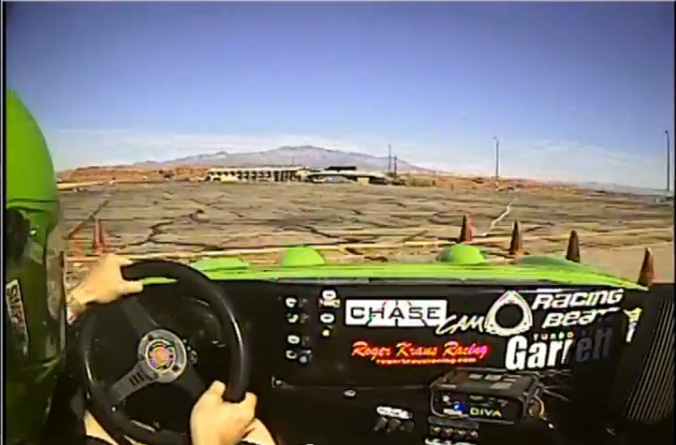 This is like riding on a 500hp Ginsu knife. Jeff Kiesel’s Sprite is known and has been known as one of the nastiest autocross cars in the country for years. Powered by a turbocharged 13b Rotary engine reportedly making in the neighborhood of 400hp, this is honestly one of those cars that would be useless in all but the most talented hands. In this video you will see car owner Jeff Kiesel drive the absolute wheels off the thing in a winning effort at an event in 2013. It is awesome to listen to how he uses the throttle around the course because in a car like this swapping ends would be instant if too much right foot aggression were part of the program.

The control of the machine that Kiesel exhibits here is pretty remarkable as well. There isn’t counter steering of much note going on, no tail hanging out, no big signs of tire spin or smoke, just complete control from a guy who really knows the car. Obviously counter-steering, sliding sideways, and spinning the tires presents a visually and viscerally appealing show for the fans and media guys like us, but it is not the “fast way” around any course, especially a technical autocross.

Part of us would love to drive this thing but then we’re pretty sure that we’d made fools of ourselves by the time we got to the first set of cones on the course. We’re not sure what the world record for spinning a car our at an autocross is, but we bet we could reset it in this machine. It would be a fun way to illustrate how good Kiesel is in it, though but it is a blow to our fragile ego we’re not willing to risk right now. We’ll leave the race car driving up to the race car drivers as evidenced by this video. Think you could hang? Want to try? Watch this and then tell us!

PRESS PLAY BELOW TO SEE JEFF KIESEL ATTACK THE AUTOCROSS IN HIS TURBO ROTARY SPRITE – THIS THING IS A WEAPON!

Ride In A Screaming 289 Powered GT40 As It Tears Around Spa And Makes An Insanely Tight Pass Rolling Alien: Mighty Car Mods Bring In A Toyota Sera That Needs De-Pimping!