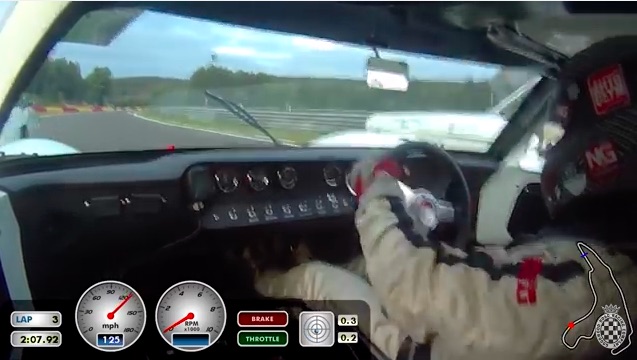 Everyone has their short list of cars that they’d do something horrible to have a shot at driving and we’re thinking that the Ford GT40 shows up on most people’s. Ultimately it was the 427 powered cars that garnered the most attention for their Ferrari crushing ways, but the 289 cars were the important breakthrough step in the development of the car that proved that they would be the players that Ford hoped they would on the international stage. Just because this thing has a small block does not mean that it is a cruiser that’s easy to drive. As you will see, driver Dickie Meaden has his hands full around the iconic Spa race course.

There is one heart stopping moment that comes at 2:20 when Meaden is rapidly gaining on a classic Mustang on his right and another little car on his left. Rather than braking and falling in behind the Mustang, he keeps the pedal down and threads the car with inches to spare between them both. There wasn’t enough room to fit the holy spirit between the car on his left and the GT40 when he went by. That dude may still be having nightmares about hearing a 289 GT40 coming by at full song.

As we have said in the past, we are appreciative of the men and women who are still taking these classic and historic cars out and pounding them as hard as the day they were built. It takes lots of money and the seeming inability to ignore how much money it costs to do this like this guy.

More power to him.

Watch This Car With Four Wheel Steering Strut Its Stuff On A Michigan Bridge In 1931 - Freak! Jeff Kiesel's 500hp Turbocharged Rotary Bug Eye Sprite Is The Ultimate Autocross Weapon - Take A Ride In It