Flight Of The Shadow: Jim Pace Suffers Incredible Crash At Wheel Of Shadow DN4 At Road America – Walks Away 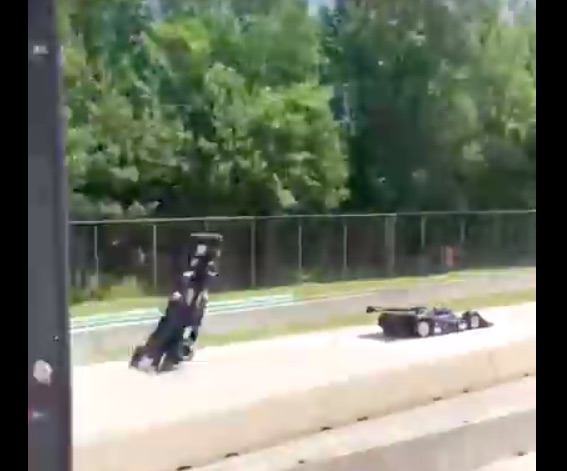 We have shown you many videos over the years with Jim Pace at the wheel of any number of killer historic racing machines. Pace kind of became our “house driver” when it came to showing off someone’s great skill behind the wheel of a variety of different cars. His skill and ability are the reason that he has been tapped to drive so much neat stuff over the years and we’re sure he was pumped up to get the nod to drive a legendary 1974 Shadow DN4 at Road America last weekend. See, Shadow was the featured manufacturer at the WeatherTech International Challenge vintage sports car race. He had no idea what was going to happen.

While on the track putting on an exhibition with fellow racer Craig Bennett, Pace was tucked in tight while climbing the hill on the main straight. Suddenly, just after the two cars passed under the spectator bridge, Pace’s car took flight snd blew over backwards at an amazingly high rate of speed. Landing on the roll bar and skidding some 150 yards upside down, Pace was able to walk away from the incident without any sort of serious injury. That is a miracle and you’ll really understand it when you see the video.

So what happened? Well, these big block powered cars are basically overgrown go karts, right? A few theories abound. The first is that there may have been some failure with the front bodywork that would have caused all the downforce on the nose to rapidly disappear and perhaps if the panels failed in such a way that they could have lifted the car itself and caused this series of events. Another theory is that Pace, while in the tight tuck behind Bennett was the victim of a bad aerodynamic circumstance where the low pressure behind Bennett’s car cause the nose of his machine to (again) lose downforce and in an instant find itself over backward.

As these are basically the only two Shadow DN4s on the planet the car is expected to be repaired. We’re super happy that Jim walked away from this one.

Double Duty Video: Chad Green Raced Nitro Funny Car and Pro Mod At Indy - Live The Weekend From The Inside Out! The End Of The Line: This Review Of The 1991 Chevrolet Caprice Station Wagon Shows The End Of An Era

One thought on “Flight Of The Shadow: Jim Pace Suffers Incredible Crash At Wheel Of Shadow DN4 At Road America – Walks Away”