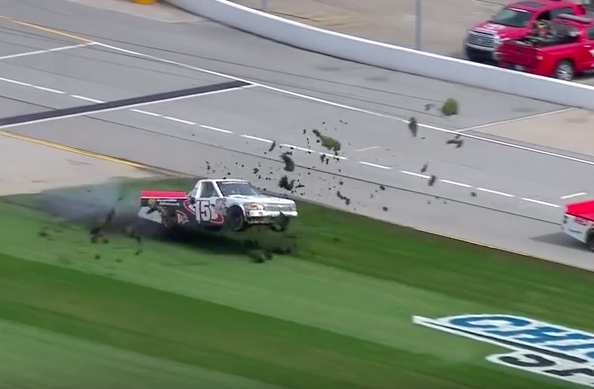 NASCAR truck series driver Mason Mingus learned a hard lesson last weekend in Chicago when he came in too hot for the pit road, ended up missing it and actually launching his truck airborne before smashing down on the grass infield of the track. The thing did not flip, roll, or do anything else weird, it just hit what looked to be a kicker style jump and leapt into the air. You can hear the guys calling the race wondering aloud if his brakes worked but when you look at the tape closely you can see he was all in on the binders before wailing the asphalt/grass transition.

We have no idea what this whole thing felt like inside the truck but we’re guessing that Mason had a bit of a sore backside when the muck and grass clumps settled down. You can see that the front end of the truck is totally hammered and it looks like both front tires are blown out as well. Is the whole thing junk? We’re not too sure on that but we do know that the fabricators at the shop have their work cut out for them.

The funniest part of the whole video is the single orange cone that gets punted out of the way after the truck has clearly crossed the point of no return and its meeting with the curb is inevitable. The guys in the booth calling the race seem to indicate that this pit road is more difficult than others to enter because of the speed that drivers are carrying on their way to the entry point.