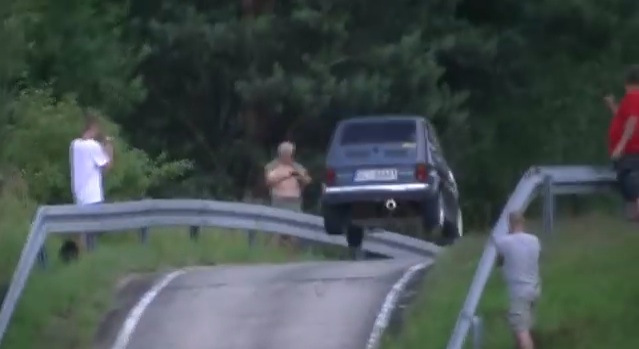 To say that the Fiat 126p is a tiny car is an understatement. When the license plate is over half the width of the car it’s bolted to, that’s saying something. Even the Lotus Elise, that tiny little sports car that you wear, not ride in,  looks outright roomy compared to this thing. Yet this car was in production from 1972-2000 in various forms around the world, using small two-cylinder engines to power it around, the largest being a 702cc inline 2-cylinder that made about 25 horsepower on it’s best day. We’ve seen more powerful garden tractors that you can at least stretch your legs out on while you toil around in the grass.

Yet someone in Poland saw the opportunity to hot-rod the Little Tykes commuter car, by jamming in the engine from a Honda CBR900 sport bike. Since the car weighs about as much as a Polaris Ranger, sticking the Honda motor into the Fiat made perfect sense and the little silver nugget seems to be doing just fine on this autocross course, running hard enough to get it nicely airborne. You might have a bit of claustrophobia, and we can’t promise that the landing was gentle, but you’ll have fun enjoying it!

Get That Lean Going: The Brutal Test Of The 1969 Chevrolet Impala 396! Morning Symphony: 292-Powered 1950 Chevrolet Truck On Alcohol!

One thought on “Gray Egg: Watch This CBR900-powered Fiat 126p Make Work Of An Autocross Course”