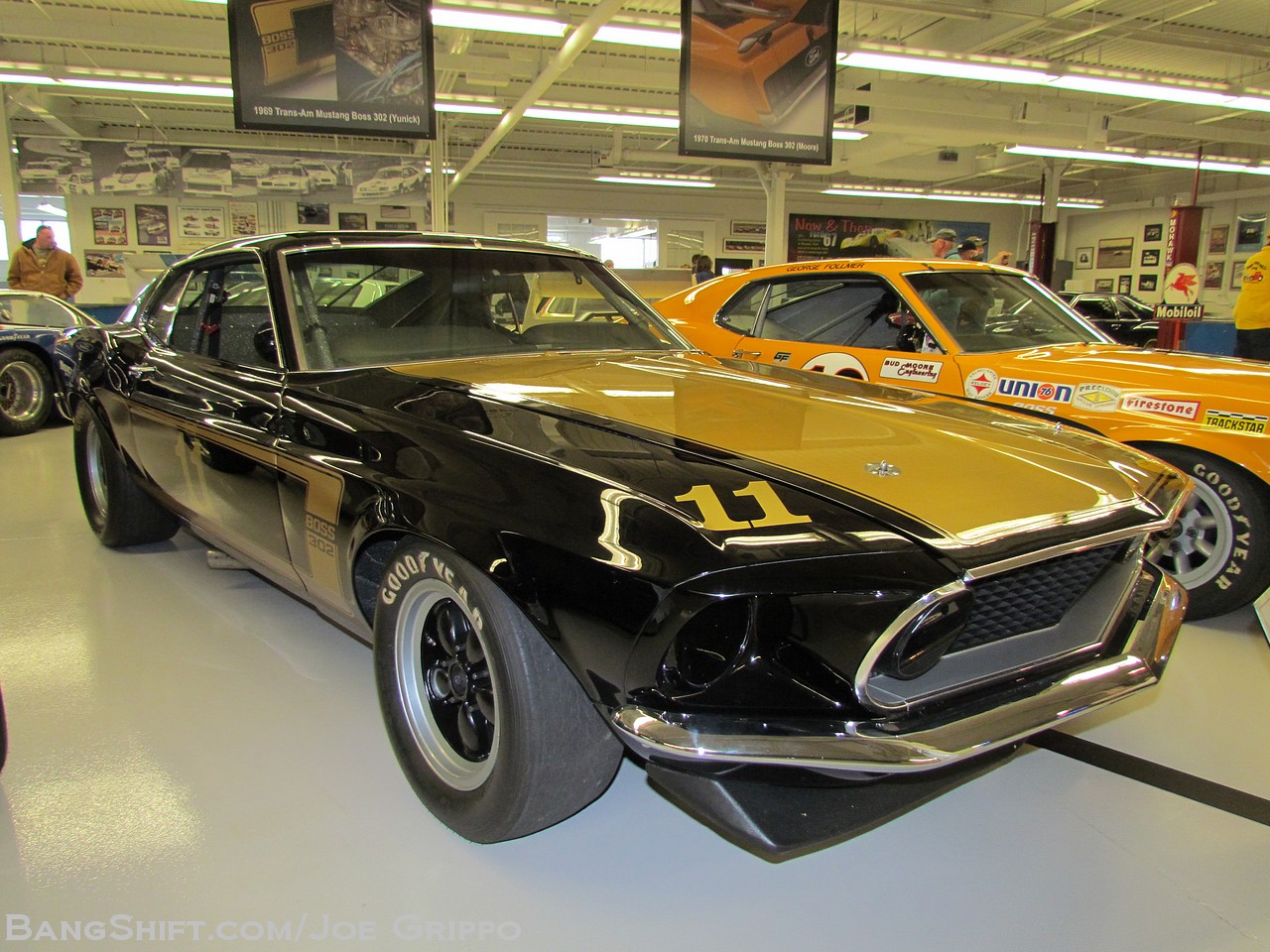 (Photos by Joe Grippo) – While Smokey Yunick often gets recognized most for the work he did with General Motors products, it is important to remember his time spent wrenching on and improving race cars for both Hudson and Ford. In fact, one of Smokey’s greatest “near misses” came at Talladega in 1969 with a driver named Bunky Blackburn who was driving a 1969 Boss 302 Mustang which Yunick prepared for the race. In fact depending on who you listen to, Blackburn had at least lapped the field once and perhaps twice before a rocker arm failure killed their hopes and chances for a win. The story is far more interesting that that though.

The 1969 Talladega NASCAR race was filled with tumult from beginning to end. The huge Talladega speedway with its 33-degree banked turns, combined with the heavy weight of race cars during and the lack of tire technology in that era created a dangerous situation for drivers. They were blowing out right front tires at speeds in excess of 200mph and no quick solution was coming to help them. Thus, Richard Petty led a boycott of the event and all of the biggest Grand National stars of the day decided to stay home rather than risk life and limb on what they deemed was a “killer” race track. Long before the NASCAR Nationwide Series existed, there was another under card of racing used to get people into the stands on Saturday before the Sunday main event and that was the Grand Touring series. Featuring pony cars, it was chock full of home built and self funded racers who were looking for a shot at the big time and while the Grand National stars walked away for the weekend, the GT racers were still raring to ply their trade on the huge track. Most of them probably needed some purse money to pay their way home. 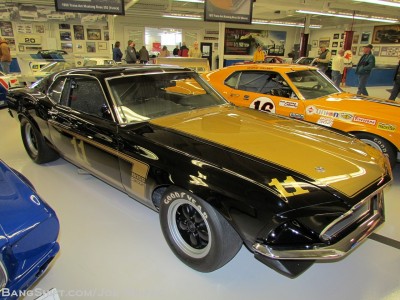 There are conflicting stories as to how and why Smokey Yunick ended up there with Blackburn, but we can only assume that Bunkie Knudsen was the driver of the decision and it wasn’t made a couple days before the race. The decision to have Yunick there in the Mustang had to have been pre-determined some time before because Smokey “Yunick-ized” the car greatly from the condition it was in when he got it.

The car you see in the photo below has lived an interesting life. It began as a production Mustang with a 428ci FE engine and was then plucked from the line and chosen to be built as a Trans-Am race car by the people are Michigan’s Kar Kraft. Kar Kraft was not officially part of Ford but they were a back door operation. They built lots of race cars for the company, did the Boss 429 conversions, and handled many special projects. When they got hold of this Mustang, it was modified with big Lincoln disc brakes on all four corners, a legal Trans-Am roll cage, light magnesium racing wheels, a full tilt race Boss 302 engine with twin 1,050 Holley Dominator carbs, big honking sway bars, boxed factory suspension components that were relocated for improved geometry, and a host of other work to make the car very capable on the road courses where it would compete.

The problem for Yunick was that virtually all the stuff listed above was useless on a NASCAR stock car, so he did what he was known for doing best, and threw most all of it away. About the one thing he did keep was the signature black and gold paint job. The magnesium wheels were illegal for NASCAR so they went in favor of a big set of steel wheels with vents cut in them for the disc brakes. The twin Dominators weren’t legal so they were ditched for a single Dominator. Most of the fancy suspension stuff went away, in favor of big beefy pieces suited for the loads and strains of hours turning left at high speeds and then Smokey really got thinking. He needed room for huge headers on the car because the little engine would be working at extreme RPMs on the big track. In order to get that room he used steering components from an Aussie Ford Falcon. Because the Aussie stuff was designed to be on the “wrong side” for an American car, Yunick mounted the steering box and the idler arm outside the frame on their respective sides, freeing up huge amounts of room for headers. Additionally, he had a special reverse rotation starter made that fit into a custom built bell housing. The starter actually jutted through the firewall and into the car! Again, more room for the huge bundle of snakes that Yunick was trying to fit under the Mustang. On paper, this stuff looked positive and like it should have aided the car in its quest to qualify and win in Talladega, especially against a myriad of home built creations.

Not too surprisingly, it all worked well. During qualifying Blackburn scorched the course with a lap of 177-mph to take the pole. The next closest 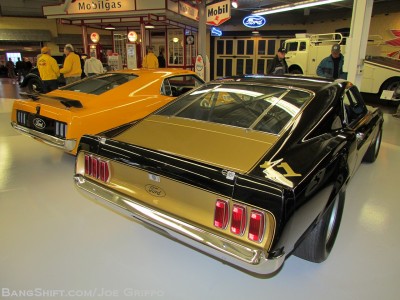 qualifier was Jim Paschal in an AMC Javelin at a hair over 172-mph. You don’t need to know much about anything to understand that a 5-mph qualifying difference is titanic in a stock car race. While Blackburn is not a household name, he was a driver that worked for Yunick on multiple occasions. In his epic autobiography, Yunick writes about Blackburn (in a chapter called, 50 Good Drivers and An Asshole no less!):

“Bunky Blackburn was a really nice guy who loved to race, but luck never favored him much. He wasn’t a bad driver, just a whisker short when compared to the stars. When Talladega had their first race, they had a support race. Mustang, Camaro, Chrysler “something” race. Bunk was helping us in the shop when I worked for Ford the second time. Knudsen was the president of Ford now and I worked for him. He wanted me to run both the Mustang race and the Winston Cup race. I refused to run the Winston Cup deal. In my opinion tires were not capable and it was a flawed surface. He told us to run the Mustang support race. Well damn, I’d just finished a Mustang Trans Am car and no time to build another circle track car so I had to switch the Mustang from a road racer to a circle tracker. Now I don’t have a driver. So I decided hell. We’ll let Bunky do it. He sat her on the pole, ’bout 180-mph…”

When the race started, Blackburn streaked away from the field like the rest were tied to a stump. He got out to a massive lead and lapped the entire field in no time. According to Yunick he lapped the field for a second time until an issue he worried about began to come true. The rocker arms on the engine were not heat treated properly and pushrods started to break through them because of all the RPM and stress they were putting on the little mill. After it ate a couple of those, the car pulled into the pits, behind the wall, and largely into racing obscurity. Yunick lamented in his book:

He led it damn near to the end when the push rods started coming through the rocker arms, which is what we expected. Who knows? If the engine hadn’t failed him that might have gotten him (Blackburn) started to Broadway.

We’re not sure that the car was ever raced again. Yunick makes no other mention of it in his book and the Grand Touring (later called the Grand American) series was cancelled in 1970 as best we can tell. Bobby Allison recorded a NASCAR win at Bowman-Gray stadium in a race where the sanctioning body combined both series and allowed the “little cars” to run with the “big cars”. Allison’s Boss 302 defeated Richard Petty who was in a huge Hemi powered Plymouth and couldn’t get off the corners like the little Mustang could. It would be the one and only top series win for a Ford Mustang in the history of NASCAR.

Smokey Yunick’s Boss 302 has been converted back into the Trans Am trim the car was originally built with at Kar Kraft and is part of the Ross Meyers collection in Pennsylvania. Meyers has been known to get out and road race the car in vintage events, which is great.

There are lots of Smokey Yunick stories out there, but this is one of our all time favorites! 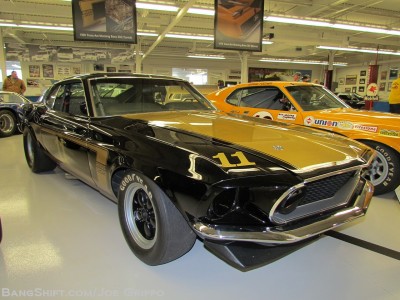 Time Capsule! This Incredible Video Split Screens A Drive Through Boston In 1963 And The Same Route In 2015 Less Is More: This 500-Horse Acura NSX Time Attack Build Is Missing Two Cylinders!