A Piece Of Racing History: The Letter That Killed Group B Rally 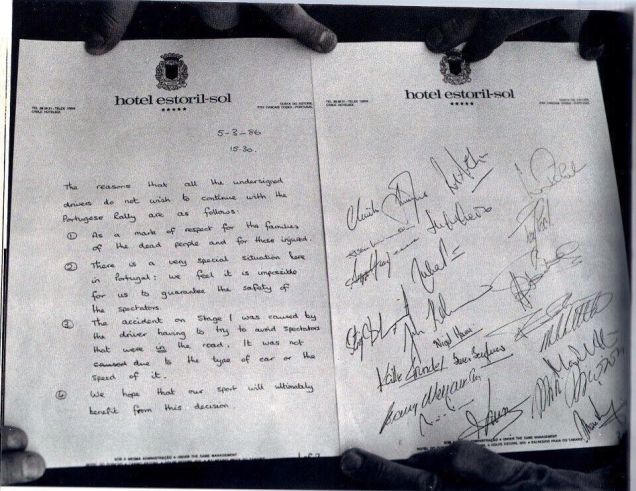 Group B rally was brutally fast, highly exciting, and exceptionally dangerous. Not because of the cars so much…there were many talented drivers who could wrangle these psychotic vehicles with precision…but because the combination of speed and the tendency of rally fans to be right next to the track, or even in certain cases, in the middle of the road, meant that at the speeds the drivers were able to achieve, there could easily be moments where there would literally be nothing they could do if some idiot was standing in the middle of the stage. This combination actually culminated in a wreck in Portugal  on March 5, 1986 when Joaquim Santos’s Ford RS200 lost control while trying to avoid spectators, sending the car rolling through more spectators, injuring thirty-one people and killing two children and a woman immediately, with another child dying in the hospital shortly afterwards. Combined with two other high-profile fatal accidents (Attillio Bettega died after a high-speed wreck in Corsica in a Lancia 037 and Henri Toivonen and co-driver Sergio Cresto died after their Lancia Delta S4 plunged off the side of a cliff and burst into flame), Group B was banned in 1987, with Audi pulling out of the class immediately after the Portugal wreck. After the ban, new rules were put in place to make the cars safer and to keep spectators further from harm’s way.

After the incident, Ford pulled out of the rally altogether and teams, who had continued to run not knowing what happened, were not willing to continue, regardless of the wishes of the organizers. In a meeting room in a hotel, a joint statement was written and produced to the press:

The reasons that all the undersigned drivers do not wish to continue with the Portugese Rally are as follows:

1. As a mark of respect for the families of the dead people and for those injured.

2. There is a very special situation here in Portugal: we feel it is impossible for us to guarantee the safety of the spectators.

3. The accident on Stage 1 was caused by the driver having to try to avoid spectators that were in the road. It was not cause due to the type of car or the speed of it.

4. We hope that our sport will ultimately benefit from this decision.

Unhinged: The Line Between The Bothered And The Botherer Crazy Taxi: An Update On The Turbo 4200-Swapped Checker Marathon

One thought on “A Piece Of Racing History: The Letter That Killed Group B Rally”