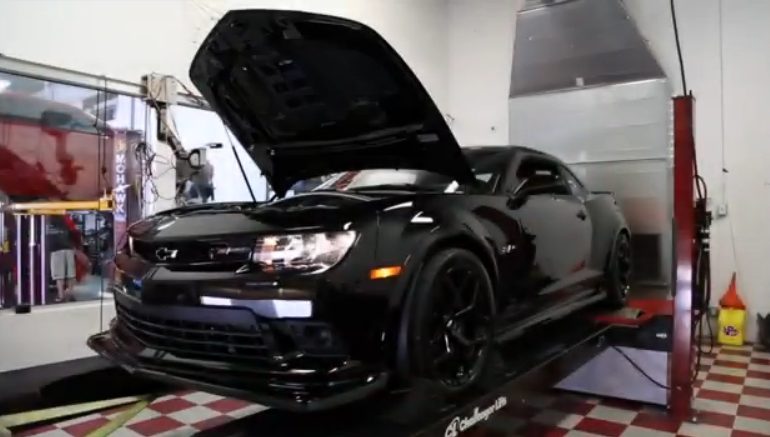 Back in January we had occasion to spend a few hours at Redline Motorsports and specifically with the shop’s owner Howard Tanner. At the time, Tanner was working on tuning a supercharged C7 Corvette and the shop had a bunch of customer cars in it getting various different modifications made. We were reveling in the fact that we were seeing a C7 in the flesh because they had just started rolling out of the Bowling Green factory at that point, let alone seeing one of the first blown examples in the country. Howard told us that he always liked to keep ahead of the curve on stuff and part of that was learning and applying his accumulated knowledge on the newest factory offerings. We knew he was serious but we didn’t know HOW serious until Howard sent us this video of a 2014 Camaro Z/28 on the rollers of the dyno in his shop. This is HIS Z/28, lest you think he just got his mitts on someone else’s for the afternoon.

By now you know the story of the Z/28. This is the most capable, hardcore, bad ass turning Camaro to ever leave a GM plant by a long shot. It is lighter, there are aero mods, there are suspension mods, a special differential, and a long list of other race bred trickery that lends itself to the car’s $75,000 price tag. We’re sure Tanner did some spirited driving in this thing before lashing it down on the dyno and making it go to work to spill the power secrets we have all been wondering about.

In the video you’ll see the car make a pull from two different angles and you’ll also see the dyno graph complete with the horsepower and torque numbers. We’re not going to give them away, you need to check out the video! With the power this thing makes, the suspension and lightening work, it must be absolutely flipping awesome to lay the lumber to this car in the corners. DO WANT!

So, here’s the first baseline testing we believe has ever been released on a new Z/28. Whaddya think?