Ride In, On, and Around The Enviate Pikes Peak Unlimited Racer – Turbo LS Open Wheel Monster 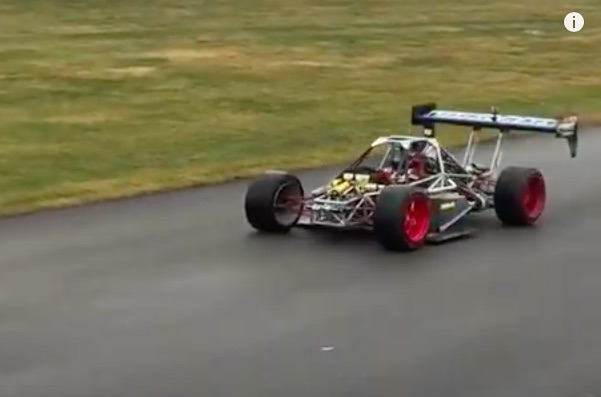 The unlimited class at the Pikes Peak hillclimb has birthed some truly evil machines over the years, each with their own proclivities and personality. While we’re not sure what to make of the personality in a rig called Enviate, we know that it sure sounds mean, it is the rebirth of an earlier project that wrecked on the mountain and appears to be one of the nastiest no-holds-barred privateer race cars we have ever seen. Ever.

For starters what we see in this video is not the finished Enviate. There will ultimately be a very swoopy and aerodynamic body placed over the entire machine to help it stay stuck to the ground when climbing the Pikes Peak road that is now asphalt from top to bottom. An earlier version of this car which basically used two ends of an Acura NSX and a custom made middle has been replaced with this, a more advanced version of that first concept. Gone are the NSX parts and replacing them are custom made everything. The suspension system on this thing in and of itself is a work of art and you will see it work in the video below. There are six shocks in total and they are laid out in two triangulated setups. One on either end of the car. There’s a shock for each tire and then the center shocks are designed to take downforce in what seems to be a manner independent of the other four. Hey, it looks bad ass.

Either way, Enviate is a “version 2.0” of another project that met a violent end at the 2013 Pikes Peak hillclimb. We are not sure who is slated to drive this monster but whoever it is better have some skills and LOTS of, uh, manhood to make it work.

Unfortunately the track was wet and the car was on slicks so we do not see a 10/10th performance here but the thing still has some serious power and attitude. It sounds boss with the turbocharged LQ9 engine in it!

Press play below to see Enviate attack Gingerman on slicks…in the rain!

Ultra4 Nitto King Of The Hammers 2016 High Flying Photos Are Right Here! If The Long F-350 Is Not Your Speed How About A Massive F-150 With A Secret? (Video)

9 thoughts on “Ride In, On, and Around The Enviate Pikes Peak Unlimited Racer – Turbo LS Open Wheel Monster”