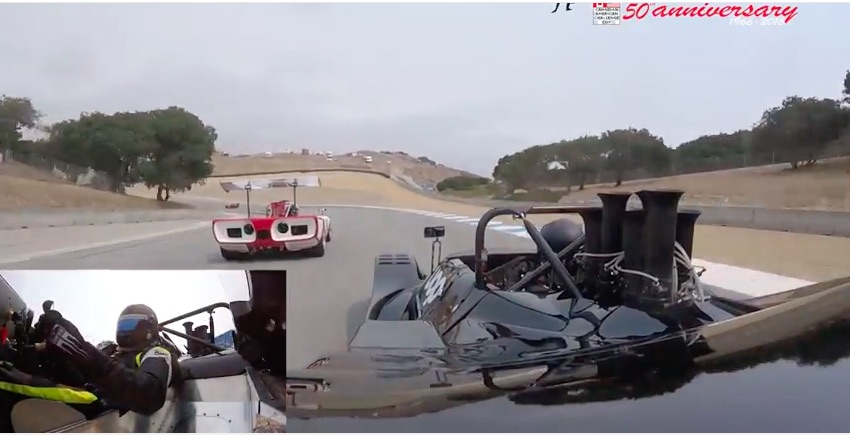 As we have often talked about, we think that Can-Am was the pinnacle blend of muscle car era insanity, internationally cool drivers, and killer race tracks across the country. The series lived a relatively short life but that’s one of the elements that add to its cool legacy. In this video we get to ride on the rear wing of the restored 1974 UOP (United Oil Products) Shadow DN4 as it is driven by Kirt Bennett. The car is owned by Jim Bartels and it is an amazing piece.

A mechanically fuel injected, all-aluminum big block Chevy (ZL-1) engine makes the thunder and the power, the chassis is an aluminum monocoque, and while the car was at the top of its game for the day, it was actually the most conventional Can-Am car that the Shadow company had ever made. The principles of the company were obsessed with the idea of winning a championship in the series despite the fact that the curtain was getting ready to close on it. They achieved their goal during that 1974 season, running largely roughshod over the rest of their competition.

In this video we see Bennett at Laguna Seca, the famed California road course that has the infamous corkscrew along with many other easily identifiable elements. Bennett is on the track with a bunch of other vintage Can-Am cars and clearly he’s running about as hard as he can and they, they are not. He eats up many of the cars on course which makes the video great because we get to see them as he streaks by.

This is one of the more menacing cars to ever hit an American race track. With the black paint, the black injector stacks, and Bennett’s black helmet, this thing is pure evil and we can only imagine what it was like to see this car carving up fields during the 1974 Can-Am season. Awesome!