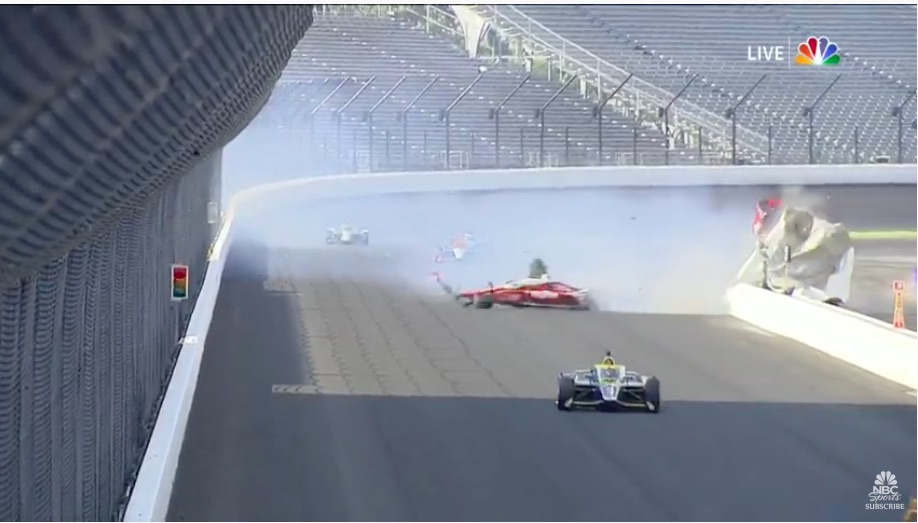 The 104th running of the Indy 500 was apropos for the year 2020. It was bizarre with no fans, it was at times akin to a wrecking derby with a runtime of nearly 3.5 hours, and just when an incredible three car battle (mostly two car battle) was formed for a five lap charge to win the race, a massive wreck in the one spot in the track that cannot be easily repaired put the kabosh on everything and Takuma Sato won under yellow flag conditions. The truly good news out of this? Spencer Pigot is OK and will seemingly suffer no long lasting effects from a wreck that would have killed guys in early Indy 500 events.

The thing that made this one so flipping scary is the fact that Pigot hit the attenuator at the end of the wall that separates pit road from the track. He spun his car, got into the wall, and as the car traveled down across the track, he having no ability to steer, it hit that attenuator with such tremendous force it is stunning to watch. We assumed the car was going to break in half with the speed he was carrying.

The attenuator had been designed with this scenario in mind but no one had ever tested it. The design looks like a bunch of tires to us and Pigot sure shot off of it like he had mashed into something rubbery that had some give, right? You’ll see him get out of the car under his own power. He was checked out at the hospital but released on the same day.

Now, why did they no red-flag the race? It was already running long and the reports are that the attenuator would take at least an hour to rebuild (they had never done a field repair of it before) and there’s no way that NBC would have hung with the broadcast that long as it was already into “overtime” in terms of its allotted window.

Sato earned his win. His car was the baddest thing on the track over the course of the 50 laps preceding the wreck. Scott Dixon who came in second looked to be unstoppable for most of the race, leading more than 110 laps but it was not his day.

Rely on the Best - Mark Williams Enterprises Offers More Options, More Engineering, and More Strength In Their Axles Than Anyone! Retro-Review: This Look At The 1994 Lotus Esprit Is Awesome - The Outsider Sport Car That Flew With Four