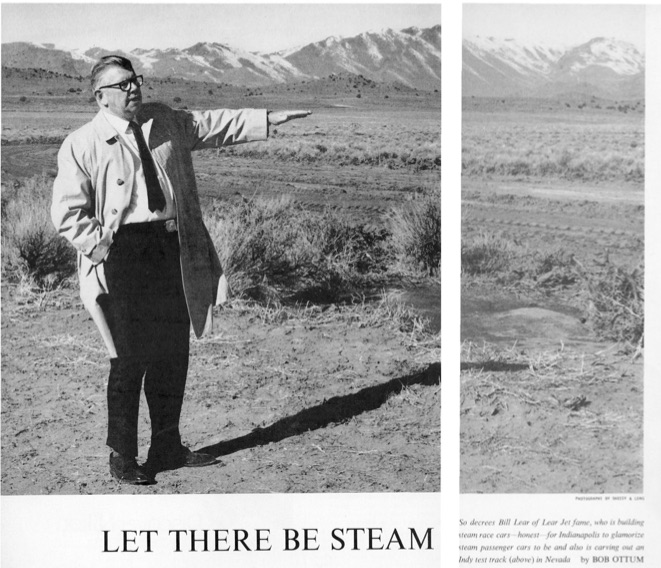 Yesterday we told you about Bill Lear’s crazy late 1960s dream of building steam powered passenger cars and a steam powered race car for the Indy 500. We told you about how the whole thing ended in failure and the steam car never so much as turned a lap while the passenger car side of things never even produced a truly functional prototype. The story is so fascinating I kept on the hunt for more information, for more insight into what the hell the guy was actually trying to accomplish and that’s where I met Bob Ottum.

Ok, I did not meet Bob Ottum because he’s dead, but what I did discover was one of the most awesome writers I’ve ever come across and it just so happens that Bob Ottum’s work was largely based around racing, especially the Indy 500. He was a sports writer in Salt Lake City for decades but he was perhaps more importantly a feature writer for Sports Illustrated. Ottum, in February of 1969, about six months before the moon landing wrote the definitive pieces about Lear’s steam car, his steam plan, the construction of the replica of Indianapolis Motor Speedway in the desert outside of Reno and just how insane the whole thing was.

What you’ll learn here is that Bill Lear was not a dumb man and Lear wholly and fully believed in this idea that he could make a massively positive impact on the world by championing this technology and mastering it. The guy did not think small and as this account of his life, times, and steam obsessions shows us, neither did the people he had working for him. A gambler, a visionary, a devil-may-care bad ass. That was Bill Lear, let Bob Ottum tell you about it.

An excerpt from the story – Smash the image of Lear below for all of it:

This whole thing started, William Lear says, when he died. Literally died; his heart stopped on the operating table and all the systems inside him began slowly ticking to a stop while a team of doctors worked to pump his life back in. When that crisis was over and he was alive again, he began to look around with a new sense of purpose. He was 66 and retired. He had millions, and all he needed was a mission. He had been everywhere and done everything. He had developed a jet airplane that has become the darling of the business world. He had inventive talent and one more thing: he was an inspired crapshooter. All of which make up the best set of qualifications any man ever needed to go automobile racing.

Naturally, racing could only mean the Indianapolis 500—any man who has already died once is just about in the proper emotional shape for that crazy American spectacle, where racing’s greatest pressures pile up. And just as naturally, not any old racing car would do. There would have to be a bigger goal than just the race. A more noble goal. Like How I Won the Indy 500, Shook Up the Establishment and Purified America at the Same Time. With those thoughts in mind, Lear announced last fall in Reno, “I am going to build a steam-powered passenger car. And to publicize it, I am going to build a steam race car. With it, I expect to win the 500.”

One thought on “Epic Read: Let There Be Steam – The 1969 Sports Illustrated Story About Bill Lear’s Steam Powered Indy Car and Business”