Retro Review: The 1986 Jeep Commanche Was A Far Cry From The Gladiator of Today 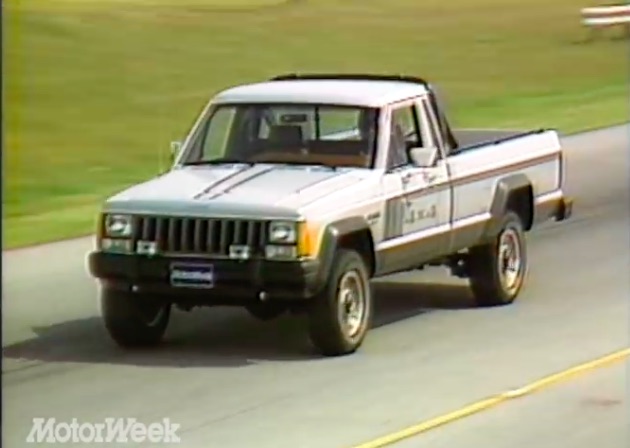 As the world has been losing their mind over the new Jeep truck that’s on the way, we figured it was a good time to look into the past to see one of the brand’s most iconic pickups. We’re talking about the Commanche, of course. The functional trucks were packed with lots of good ideas, they were road raced by the Archer brothers, and they sold pretty well. Lots of the Commanche was a Jeep Cherokee with a slightly reworked chassis and different sheet metal, which was not a bad thing as the Cherokee was a slam dunk at this time in history and sold like hot cakes.

This MotorWeek review is awesome because we see the truck in the normal driving environment, we see the truck off roading, and we see the truck on the test track. That’s where the sadness of the 1986 comes running off the screen at the viewer. Back in 1986 these trucks were offered with a 117hp gasoline burning four banger, a weak ass Renault diesel that did not make 100hp, and a 2.8L Chevrolet V6 that was actually rated for less HP than the four banger (115) but slightly more torque. The end result was a slow, SLOW truck.

0-60 in 15.2 seconds, they did not even run the quarter mile test, they said the engine would not rev above 4,500 RPM, and it took six seconds to accelerate the truck between 40 and 55mph. That’s freaking insane. Right? Quarter mile times would have been way north of 20-seconds and that is likely why they did not run them.

The performance may have been weak sauce but we think that these trucks have aged well and we’d love one with an empty nose to get a stroked 318 in immediately. THAT would be awesome.

2 thoughts on “Retro Review: The 1986 Jeep Commanche Was A Far Cry From The Gladiator of Today”