The Dirty Cougar: The Moment Of Truth – Would The $400 Mercury Survive King of the Heap? 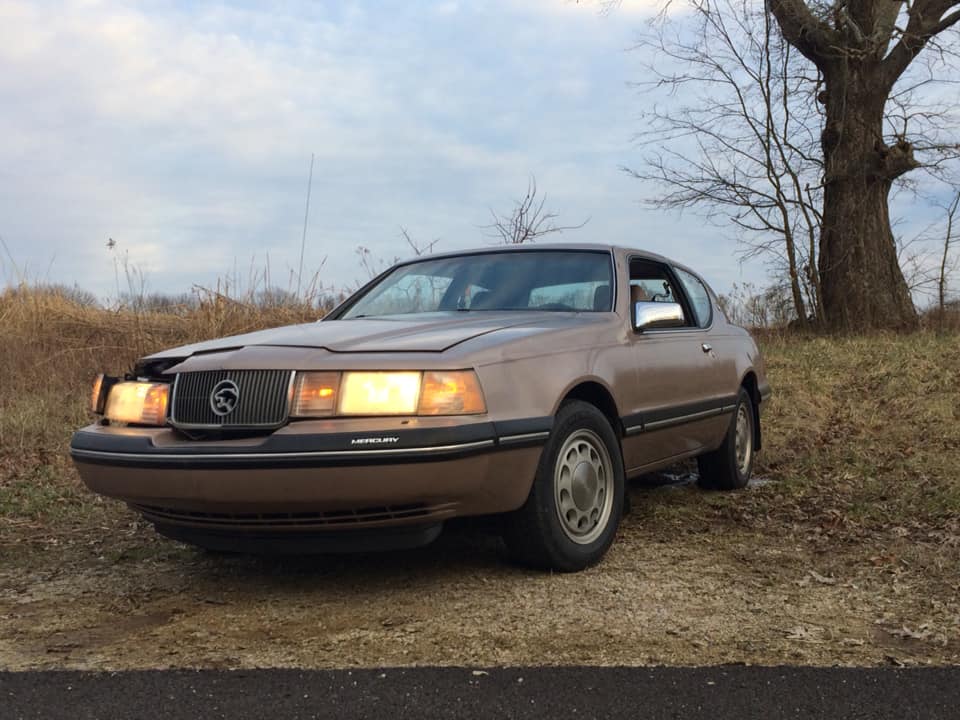 If you missed the last update on the Dirty Cougar project, click here to check it out!

So let’s recap on the progress we’ve made with the 1987 Mercury Cougar LS that has become a cheap-ass project car of sorts. We woke up a surprisingly decent Cougar that had been resting for nine years in short order. We addressed the immediate concerns, like fuel issues, a throttle body that let the 5.0L drink it’s own coolant, and tires that might date back to my first year of junior high on those genuinely bad 14-inch steel wheels and wire hubcaps. We learned that all the soft brake hoses on the car had all the structural integrity of cheesecake, that the transmission coolant lines were ready and willing to puke everywhere on command, and that the tires that were on the Mustang were just as bad. With days left to get our stuff together before the Cougar had it’s date with destiny at NCM Motorsports Park, we had managed to get the Mercury up to a safe level of driving. It cruised pretty well…the shift from third to fourth gear has been sketchy the whole time up to this point but I had figured out the transmission well enough to make that shift as painless as possible for the AOD to take. The car was even driven on a 100-mile round trip to where team member Scott works at just to prove that the car wouldn’t absolutely kick the bucket…and to show him what he was getting into quite literally, since he was the last team member to see the Cougar in all of it’s glory. 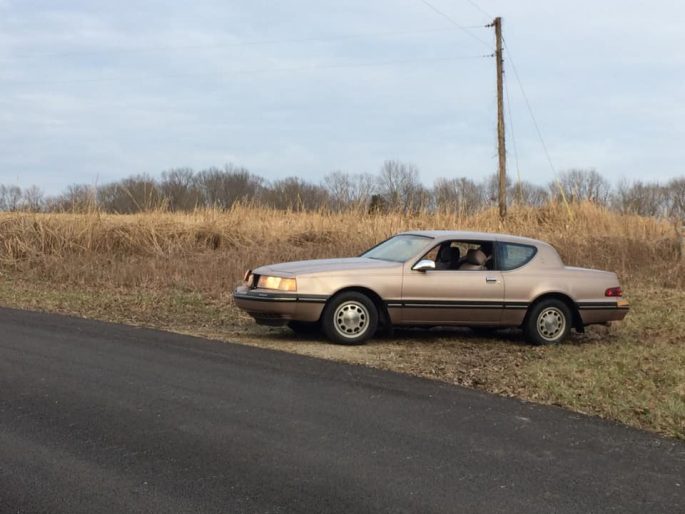 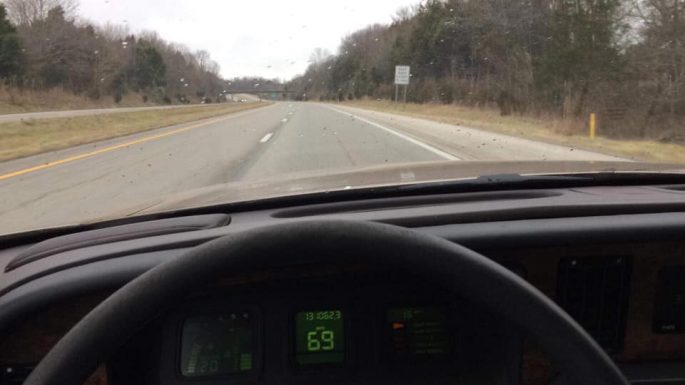 That didn’t stop me from making some very last-minute changes right about the time the polar vortex turned western Kentucky into one gigantic refrigerator. A check of the rear drums showed that the automatic adjusters weren’t doing anything useful, so I manually adjusted the drums out and we went from passable brakes to very useable brakes in one shot. Then I tackled the last thing I could think of to do, the fuel filter. The Cougar still had a habit of choking and bitching a bit on whatever was coming through the lines, so after spending some time watching YouTube videos on how to deal with the duckbill clips, I laid down on the concrete pad in front of my house and proceeded to take a fuel bath in eleven-degree temperatures. It’s been a long damn time since I’ve been that cold, but the results were worth the punishment. During testing, the Cougar was laying patches of rubber off of the right-side wheel on command. Small patches, but it’s a 1987 coupe that isn’t a Mustang or Camaro…I’ll take a win where I can.

Saturday, February 2nd, 2019 was the day. We brought tools, we brought fluids, and we brought chairs, because my track record of vehicles living through King of the Heap isn’t great and we all can’t fit inside of the Cougar. So far, I’ve blown up a Camaro and destroyed a Cadillac so thoroughly that the only recourse was to take it to the junkyard…where the car promptly became banana-shaped when it folded up due to the rust. The Cougar did drive to the track at a low-stress 80 mph on the Interstate (teammate Chris, in his Pontiac G8, followed me in and verified the speed), but whether or not it would repeat that feat was yet to be seen. I had three distinct worries: 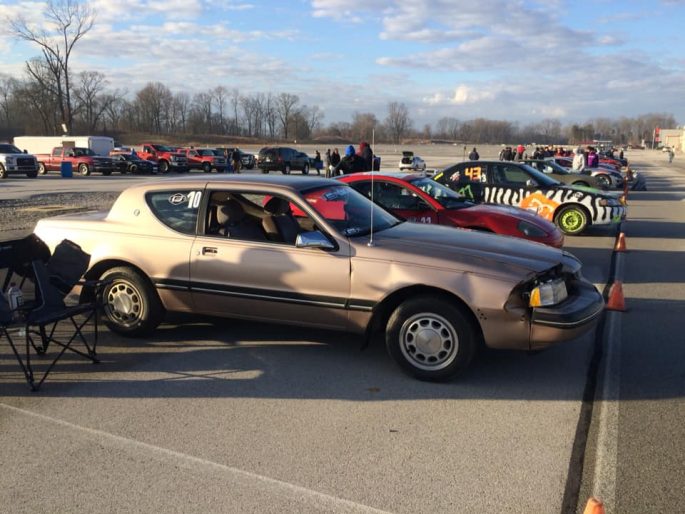 As before, I took the first lap on the road course and found myself talking my way into driving angry. I’ve invested so much work getting this car ready…was I absolutely sure I wanted to kill this somewhat decent Mercury? It took a minute, but I finally coached myself into the game with this reasoning: if it dies here, you walk away clean and figure out what to do from that moment forward. If it survives, your efforts were heroic and the car deserves to continue to be improved upon. So when I was waived onto the road course, I buried my foot into the throttle and the 5.0L got the clearing-out it so truly deserved.

In lieu of explaining every little detail about the day, I’ll instead let the video footage I shot do most of the talking. A couple of quick notes, though…the Mercury was leaking fluid pretty bad, but a lot of the leaks were cured when Scott suggested that the PCV valve was clogging up. He was dead-nuts on the money, and we went from puddles of oil to simply a spot or two, very manageable with some dry sweep. We still have a rear main or rearward valve cover leak to look at, though. We also probably need to do a fluid drain and filter change on the AOD, and I won’t be surprised if I do another fuel filter in the next month or so. In addition to the team members, we had seven-time NMCA Nostalgia Muscle Car champion Andy Warren take a crack behind the wheel of the Cougar after his car, the very drifty Lincoln LS from last month, suffered a cooling issue that was not going to be fixed at the track. Finally, after all was said and done, after everyone left, I drove the Cougar home, with no new noises or complaints.

So before you go watching the videos, I want to ask you, readers, a question: The Mercury has proven to be very much alive, and to be honest, it’s grown on me a bit. Enough so that I’m possibly thinking about a long-term adoption or at least a quick and dirty project build that keeps within the confines of the $5,000 Rough Start challenge I keep hawking Craigslist ads about. Call it putting my money where my big mouth is. Is that something you might be interested in seeing? I ask this because if I take the car back to KOTH for the final event in March, there is still the chance that the car gets claimed and I get stuck with something like a Dodge Neon that’s kissed a tree, or a Hyundai that’s been beat on since the first event back in December 2017. Let me know in the comments below what you think. Meanwhile, enjoy the footage!

One foot of vacuum line: NO COST (to me, anyways…team member picked up the bill!)

8 thoughts on “The Dirty Cougar: The Moment Of Truth – Would The $400 Mercury Survive King of the Heap?”