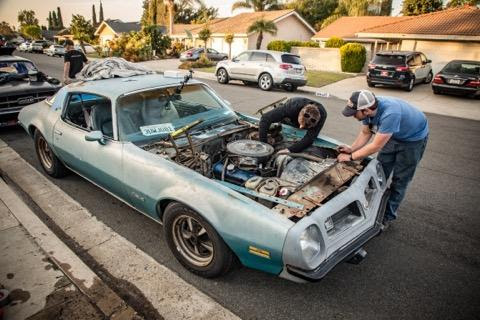 (Words and photos by John Bunger) – Meeting strangers from the internet to revive a forgotten muscle car and drive it 2000 miles across the country might just be the worst idea I’ve ever had, but it ended up being one of the best. I remember when I first spotted it, traction bars and headers poking out from under the cover. What I hoped would be a black and gold Smokey and the Bandit Trans Am (ready to steal brides and evade Buford T.) turned out to be a faded blue ‘75 Firebird Esprit. The owner informed me he’d been throwing parts at it for a few years, and it wasn’t for sale. I knew I needed a broken Firebird on the other side of the country like a fish needs a bicycle, so I shelved the idea. 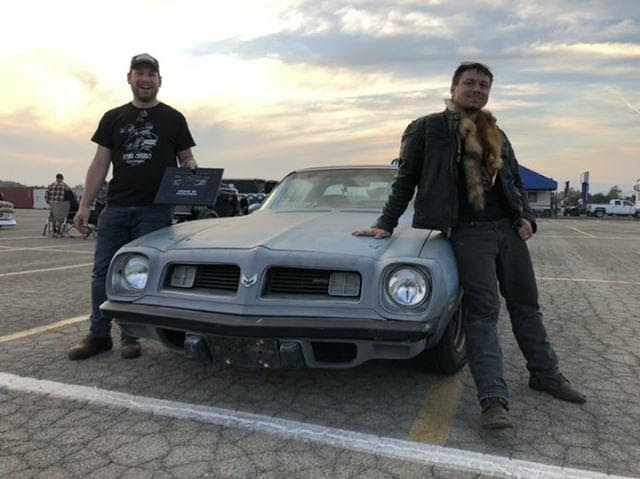 A few weeks later I was sitting around the fire with Aaron and Emily Reeves, talking life and careers in the car industry. Aaron related to me “We have invested everything in adventure and experience of life.” I realized something: this car was exactly that, an adventure. Without a second thought I called the owner and informed him I would be buying his broken car and driving it home, halfway across the country. I didn’t have a plan, much less a backup, but I was hell bent on making it happen. Less than a week before Thanksgiving I found myself in a stranger’s driveway with Vladimir Zagumennyy, a fellow Youtuber and Pontiac enthusiast, staring down an ill fated Firebird that hadn’t run in 5 years. The keys were jammed in the column, the trunk was packed with spares, and the tires had more cracks than a plumbing convention. After an hour or two of fiddling we found a completely new ignition system, but no spark. Not a great sign for the troubleshooting we had ahead. What could’ve been a week long battle to revive the beast came down to a $17 HEI module the owner had replaced with a new, equally faulty unit. With the ignition hot wired, tires replaced, and a dead accelerator pump, the car was ready just in time to make the 70th Anniversary of Hot Rod Magazine. We met up with our friend Matt and took off on the first test drive in half a decade. 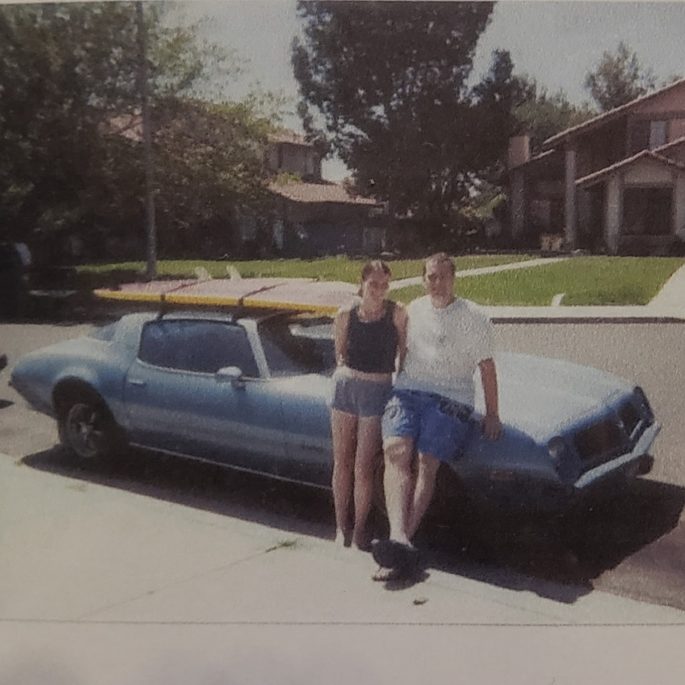 After a couple unplanned stops we arrived at the biggest car event I’ve ever seen. Thousands of fans and a sea of hot rods lined up at Pomona for the show, semi trailers churning out burgers, and nonstop drag racing. Matt lettered the spoiler for the car just feet from the track while muscle cars ripped down the 1320. We met some fans and familiar faces, Elana, Lucky, Dulcich and Freiburger were in attendance and equally enthused with our idea. Before it was time to go, Matt laid down his signature chalk art while the Hot Rod staff wrapped with awards. Standing at the main stage, I’ll never forget Jacob Davis telling the story of our Firebird to the mass of fans. On the merits of the foolhardy trip we committed to, we won the Award of Excellence for being “the most Roadkill car at the event.” All that was left to do is live up to the title.

Our last day in California saw a lot of progress on the neglected Pontiac. Matt hand stenciled and painted a screaming chicken on the hood, right in the street. Vlad found the source of our accelerator pump issue, likely from years prior, a gasket had been incorrectly replaced. I set to relocating the hotwiring inside the car, fixing the leaking valve covers, and checking fluids before the trip. With the new spoiler installed and no heat, Vladimir and I said goodbye to our friends and set off for Iowa in the middle of a November night. We were determined to make the trek even if we had to push the car, which was a realistic possibility at that point. 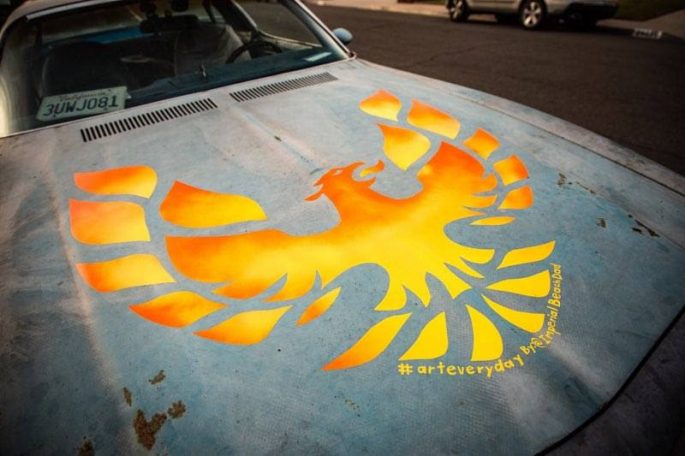 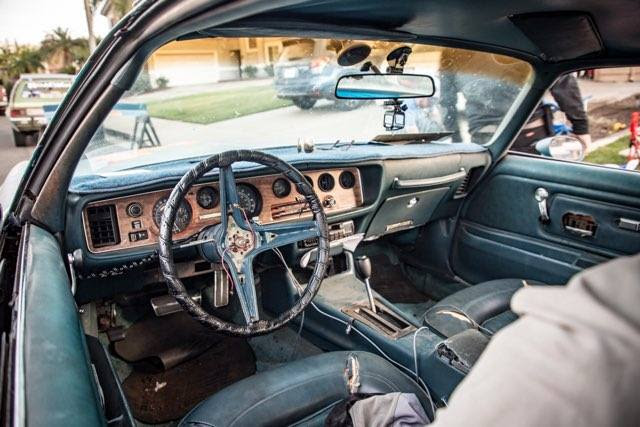 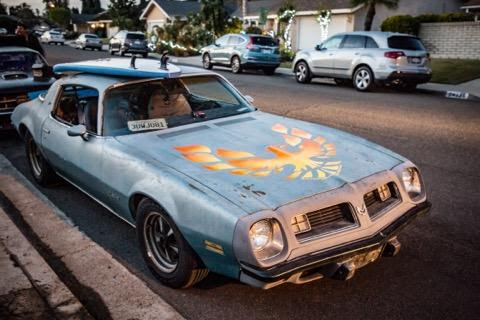 Short of the freezing toes and gas station food, the 2000 mile trip could not have gone much better. We made stops at the Grand Canyon and Meteor Crater, dodged tweakers in New Mexico, and took some promo photos in Hooker, Oklahoma. Some 30 hours after leaving, we finally made it to Vlad’s family in Nebraska. Not deterred by the cold or lack of sleep, we took time to revive Vlad’s ‘68 Firebird and cement plans for another project together. With Thanksgiving just hours away, I hit the road fueled by victory and exhaust fumes.

Although my ‘75 Firebird isn’t the sleek, black and gold getaway car I wanted as a kid, I found something a little more special in it. It brought strangers together, formed lifelong friendships, and took us to places across the country we had never been before. This car is a connection to the past, a cocaine spaceship, and by far the best way to chase the sunset. It’s more than a machine, it’s a time capsule that takes me back to some of the best hours and miles I’ve shared with some of the best people. That’s what hot rodding is all about. 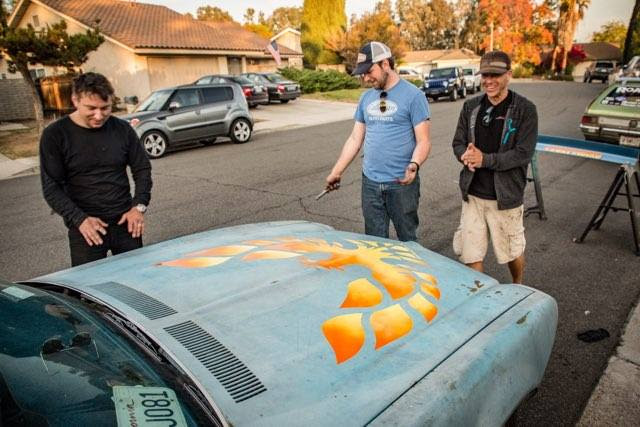 Bio: Jon Bunger can be found on Instagram and YouTube as Mad Scientist Garage. He is the descendant of Vikings and scholars, and hopes to inspire others to explore their wildness, see the world, and connect with the people in it.

Aeromotive’s Adjustable Universal In-Tank Brushless Fuel Pumps Are Here! The Best Of All Worlds! Youngest IndyCar Winner Ever: Colton Herta Tops The Board At COTA