Unhinged: There Will Be No Motorcycles Racing The 2020 Pikes Peak International Hill Climb 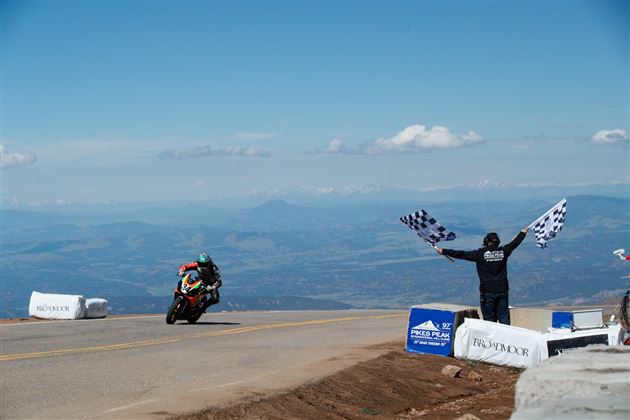 The Pikes Peak International Hill Climb has prestige, has international appeal, and above all else, has danger…racers blast up the side of Pikes Peak in Colorado, stopping at the summit. It’s a no-joke kind of course filled with switchbacks, radical corners and the kinds of drop-offs that cater more to a mountain goat or a cartoon coyote more than they ever will to a race car. Unfortunately, accidents and incidents happen at the mountain, including this year’s fatality, Carlin Dunne, who was trying for a fifth win in the motorcycle class on a Ducati. Dunne’s death apparently got the PPIHC board of directors into action, and in a statement, said, “…there will be no motorcycle program offered in 2020 so that race organizers can gather data and analytics to review more thoroughly the impact on the overall event in the absence of this program.”

Motorcycles have run on the hill climb for 41 of the 97 years that the event has been held, and the directors won’t issue a final ruling on whether or not they’ll get to return until late 2020. But why are they even considering the ban? Here’s my opinion, for better or worse: it’s motorcycle racing. It’s inherently dangerous…that’s part of the thrill for riders. Racing up the mountain is dangerous, too. Ask anyone who has ever seen footage of cars crashing off of the sides of the mountain…whether it hits the first rock or just keeps on going, there will always be an element of genuine risk at Pikes Peak, same as another legendary race: The Isle of Man TT. If you for one second don’t believe that Dunne wasn’t aware of the risk, or didn’t think about the consequences, just leave the room now. I promise you it was on his mind. I promise you that he knew what he was doing when he straddled that Ducati and dumped the clutch for another blast up the mountain like he had done many times before.

Do not neuter the Pikes Peak hillclimb because the thought of risk is too much to bear. Reconstruct the accident. Learn from what happened, and implement a change if it’s genuinely needed. But if this accident wasn’t due to some freak failure, don’t proceed to neuter the race. Risk and reward go hand-in-hand and many will do whatever it takes to get that reward. There are racers who now have no goal and are worried about ever having one again. Let America have it’s Isle of Man track. Leave the mountain alone.

The "WTF?!" Files: A Violent Mud-Bogging Camaro/HMMWV Hybrid Finnegan Shows Off The Death Metal Charger, Lights Stuff On Fire, And Wonders If His Stuff Will Blow Up Or Not

22 thoughts on “Unhinged: There Will Be No Motorcycles Racing The 2020 Pikes Peak International Hill Climb”