Video Of The 2015 Corvette Z06 Testing On The ‘Ring! This Looks Like One Mean Supercar Slayer (UPDATE: It Crashed, Too)

Corvettes have been in the news for the wrong reasons lately with the recall and production stoppages that were announced a little while back so allow this screaming ball of yellow awesome to brighten your day if you love ‘Vettes. The car you will see on the ‘Ring in this video is reportedly a 2015 Corvette Z06. Lots of engineering and design work went into making this car the gnarliest Corvette to date and it seems like the final tuning and testing may still be on going. Of course this could be a mule car that is testing components, parameters, and other stuff that may be coming in future Corvettes so we’re just going on what our eyes are telling us. This 650hp car will be capable of making mince meat out of many cars around the globe that cost many times as much. There was debate as to whether or not the Z06 lineage would continue with this model and there’s still some lingering concern that this may be the end of the line for Z06 edition Corvettes unless sales increase.

GM has packed some cool technology into these cars and we’re not just talking mechanically. The onboard camera and telemetry that allows drivers to film laps at race tracks and analyze their performance is beyond neat. On the composites side, GM used lots of carbon fiber in the construction of the car and spent lots of time working on the aerodynamics of the machine as well. Hence the reason for some of the “doo-dads” you’ll see on the body. We know that there are plenty of guys who will buy these things and idle them around but there are lots of others who will relentlessly hammer them at the drag strip, on the autocross course, and around road courses like this one! 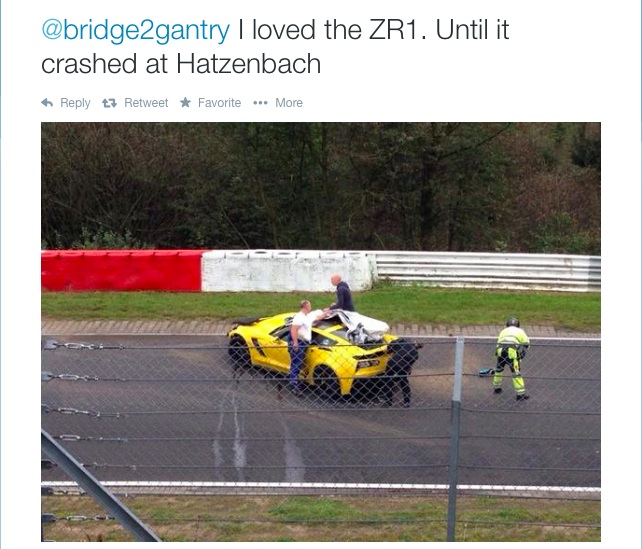 Rodders Journal Revival 2014: 1932, 1933, and 1934 Fords On The Grounds At Pimlico - Part One Drag Gallery: The Last Drag Race At Lancaster Dragway - A Night Of Bittersweet Celebration - Does The Track Have A Future?

4 thoughts on “Video Of The 2015 Corvette Z06 Testing On The ‘Ring! This Looks Like One Mean Supercar Slayer (UPDATE: It Crashed, Too)”