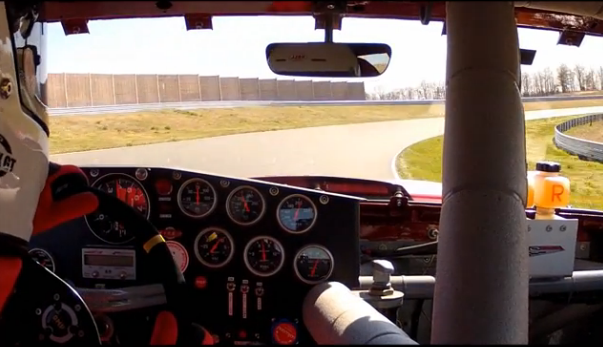 If you love cool old cars that can turn corners, you vividly remember seeing Don Stellhorn’s 1964 GTO when it was featured on the pages of Hot Rod Magazine back in 2006 because we sure do. It was like someone had hit us with a 2×4 when we first saw the photos of the car all hunkered down on its wheels and tires, the fender flares making the thing look a mile wide, the air dam, rocker extensions, and spoiler on the trunk lid just made endlessly stare at it. Back in the early 1970s when the famed Grey Ghost had its season in the sun with Herb Adams and his Pontiac engineer buddies turning the screws, everyone got the message that these cars could be 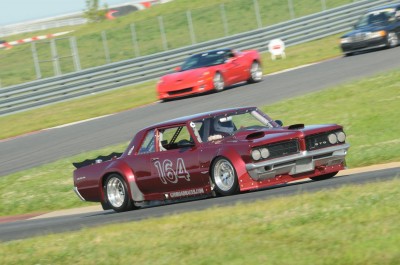 made to work, so consider this the ultimate and modern extension of what the Ghost could have been if the Trans-Am rules allowed it at the time. We actually got to see Stellhorn’s car at the event where this video was taken which was the American Street Car Series Run To The Shore 2012. Chad, Nutting, and I were there that weekend to cover the race and when we saw Stellhorn’s car come off the trailer, Nutting and I literally took off for it immediately.

The car has a 416ci LS motor in it that makes about 650hp (at least that is when it was dynoed in another video on Stellhorn’s YouTube page so we’re going to go with that as the number. The chassis is an amazing jungle gym of tubing, bracing, and bends to get the A-body as stiff as possible and provide protection in the event of a shunt, as the Brits would call it. In 2006 the whole “Pro Touring” thing was coming together and starting to move in the direction that it has gone in now where people are starting to really participate in events and get out there to use these great components that they are using on their cars. In our opinion, Stellhorn’s car is way more racer than pro touring. We’re not saying that is a bad thing but when you see the “office” that Stellhorn works in while driving this car, it is full on racer mode.

It would be pretty awesome to start a “what if” vintage Trans Am series that forced guys to use these big old cars but  allowed them to get kind of nuts with how they built the cars to see just how gnarly they could get. We’d mandate stuff like steel bodies and whatnot but allow them to go as hardcore as Stellhorn did with his Goat.

The other thing we find impressive about this car is he fact that it still looks as bad ass now as it did then. Sometimes cars as aggressive and nasty as this one don’t stay “current” for that long and start to look lame and dated after a couple years. This GTO will look like a killer 10, 20, and 30 years from now. Stuff that is literally built for battle and actually gets hammered on will always age better than the trendy cars that only race to a a power parking spot at a car show. Fact.

Would You Have The Guts To Drive A 34,000lb Road Grader Over The Most Rickety Looking Bridge Known To Man? Show Photo Coverage: The 16th Annual Motor Madness - Roanoke, Virginia - Awesome Cars and Trucks!

One thought on “Video: Ride Along In Don Stellhorn’s Awesome 1964 GTO Road Racer As He Laps New Jersey Motorsports Park”