Would You Have The Guts To Drive A 34,000lb Road Grader Over The Most Rickety Looking Bridge Known To Man? 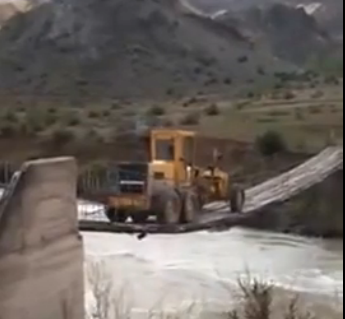 Here’s a simple question on a Friday that I had to ask all of you in reader land after seeing this video. If faced with the situation below, would you have the, ummm, “courages” to drive a Mitsubishi 330 road grader, which weighs 34,000lbs over a bridge that looks like it was part of the set for a damned Indian Jones movie? In my opinion, the guy driving this thing was either doing it under duress, to win a bet, or because he had nothing left to lose. Hey, maybe he had done it 10-times before but judging by how slow he is to nudge the tractor out onto the span, he seems to be saying a couple of prayers.

I unintentionally put myself into a situation that was way less dramatic than this one but could have been as harmful to me living another day as the raging river several years ago when I was driving trucks for a living. I was working on a special assignment in Florida, making deliveries. I misread the address of one home and the instructions told me to back into the driveway. Well, I backed into this driveway and the homeowner came hauling tail out of his house screaming. Little did I know, I had backed over a bridge that spanned some sort of creek which was about 20-30 feet below road level. My truck weighed about 30,000 lbs at that point. The bridge, as the excited homeowner informed me, was rated for 10,000 MAX. My blood ran cold because the only way out to to drive back across the thing. I didn’t take the same approach that this grader operator does. I wound that truck up and pulled like three gears before I hit the thing and scooted over. Both the homeowner and I saw many visions of badness in those seconds, but thankfully it all turned out OK. Lesson learned….always double check the address!

Anyway, back to this guy and his road grader. Think he makes it? Would you do it?

PRESS PLAY BELOW TO SEE COURAGE, STUPIDITY, OR SOME COMBO OF BOTH FROM AN UNKNOWN COUNTRY –

Watch This Massive Fiat Tractor Suffer A Clutch Explosion And Break In Half At The Start Of A Pulling Attempt Video: Ride Along In Don Stellhorn's Awesome 1964 GTO Road Racer As He Laps New Jersey Motorsports Park

8 thoughts on “Would You Have The Guts To Drive A 34,000lb Road Grader Over The Most Rickety Looking Bridge Known To Man?”