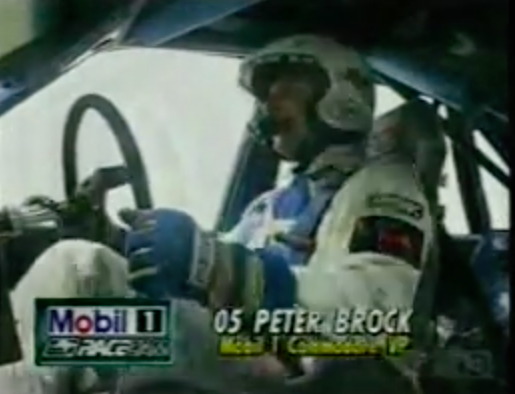 We have talked a lot over the years about Australian racing legend Peter Brock. The guy dominated races at Bathurst and was one of the most famous people in the country for decades before his untimely death in a racing accident during an event in 2006. Known as the “King of the Mountain” because of his Bathurst domination, he had a career with big time backing from manufacturers, big sponsors, and lots of racing wins. The sponsorships helped but it was his skill and guts that propelled him to those victories. This video shows some of that in a playful but kind of stunning way.

We have showed you in-car video of Peter Brock before but this is the first time we have showed THIS in-car video. What you are going to see is Brock ripping around Bathurst and talking with fellow competitor Allan Moffat. Moffat was knocked out of the race by engine problems and they must have brought him in the booth to do color. When we drop in on Brock we can see him tooling around with one hand one the shifter and the other on the wheel.

While running full kill, Brock tells the guys in the booth that second gear has gone away in the transmission and he has to hold the shifter lever in place through the second gear corners. He mentions that his wrist is getting tired but it does not seem to be slowing him down at all. Remember that all of this is happening at full race speed. Consider that when you hear how calm he is, how clearly he is speaking, and how the tone of his voice is that of a man walking down the sidewalk.

Glorious Failure Video: This Film Documents NASA Space Shuttle Main Engine Test Failures - They Blew Up A LOT Of Stuff! Watch This Mighty 1971 McLaren M8F Destroy The Quick Time Of The Day At Goodwood A Couple Years Back