Thrill Show Hero: This Wacky 1940s Film Made By Dodge Promotes Safety and Toughness With An Odd Storyline 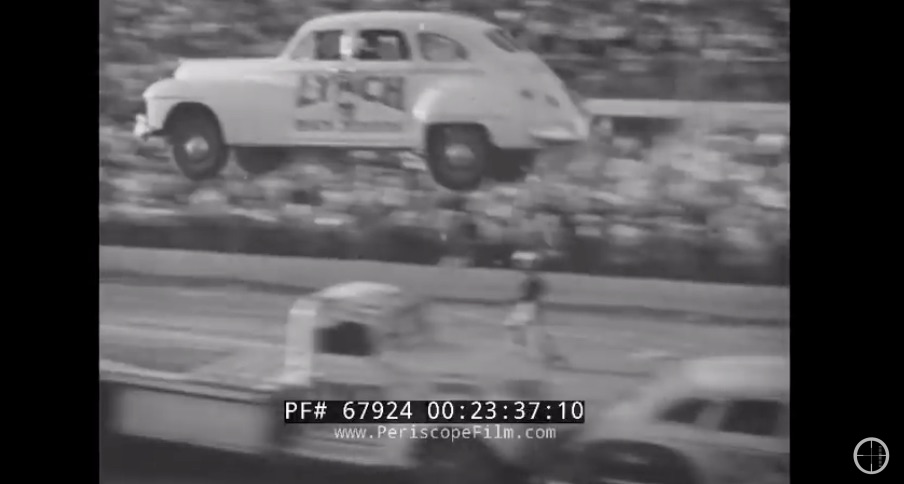 For starters we understand what the message is here. It is the same message made by every other “stunt show” promotional film ever made. It’s to say that the cars being used, in this case Dodges, are strong, powerful, and safe. When this film was made in what looks to be the late 1940s, traveling automotive stunt shows were the rage. It wasn’t a fair of any proportion if you didn’t have a stunt team performing on the horse track at some point during the event. In this case the featured team is that of Jimmie Lynch and his “Death Drivers”. Hell of a name, Jimmie.

We see the cars do the typical stunts. Precision driving, fire wall, small offset ramps, and all that kind of stuff. There are a couple of stunts here that seem aggressive for the time period and those are the jumps. There’s one designed to mangle the car being flown as there’s no landing ramp and it is referred to as the “cannonball jump”. There’s no two ways around the fact that it must have hurt like hell to stick the landing on that sucker.

The plot line here is kind of bizarre. You have a young driver who shows up and wants to be part of the show. He basically talks his way into a car with the idea that he’s just going to complete a jump with no training or practice. Long story short, it does not end well. What happens next? He spends an afternoon “training” and the net day the guy manages to handcuff himself into a car and complete a series of stunts culminating in a big jump.

Jimmie asks the crowd whether he should hire or shoot the driver. The crowd seems to vote shoot but Jimmie gives the kid one more task to roll a car three times and land it on the wheels.

The kid completes this job and gets hired. Presumably this leads to a life of heavy drinking and soreness from crashing cars on the weekly. Happy stories!

3 thoughts on “Thrill Show Hero: This Wacky 1940s Film Made By Dodge Promotes Safety and Toughness With An Odd Storyline”