Watch An Aussie Burnout Competitor Blow The Supercharger COMPLETELY Off His Motor! 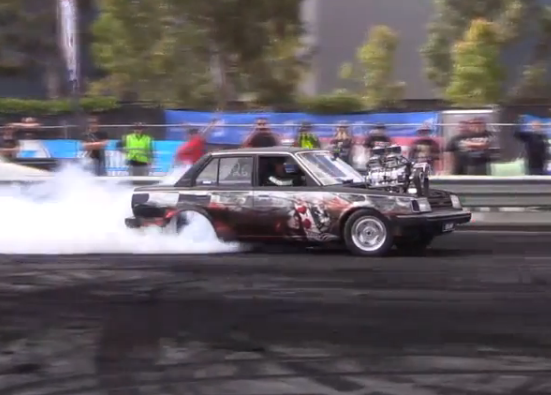 In a normal yeah, hot rodding season would be in full swing all across Australia and that means that tires are being destroyed by the truckload each week at burnout contests. We’ve often marveled at the punishment the engines in “power skid” competition cars endure and we have ever showed you specialized dyno testing videos featuring the engines being completely abused on the pump to make sure that they’d stand up to the rigors of “field testing” by drivers. Here’s one instance where the motor decided that it didn’t want to play and the supercharger was the first to leave the party…literally. As you’ll soon learn, supercharger restraints are not part of the safety rules package at Aussie burnout contests.

We think that this is an old Corolla, but we’re still pretty fuzzy on lots of the Aussie car ID stuff, so don’t slap us around too hard for being wrong on that. As most every other burnout car, this one is powered by a thumping V8 with a whole bunch of supercharger on top of it. Things begin with copious smoke and the driver running the engine right up to the rev limiter and then pegging the thing right on it. This is a good strategy for about one second and then as the car pitches into a sideways slide, KABOOM! There is a Hollywood level sound effects team BOOM noise emitted by the engine as the supercharger gets barfed right off the top of the mill. It appears that the supercharger was only held to the car by the fuel lines. Those lines are pretty strong because the whole weight of the mess just kind of hangs there after being flung about until a couple of beefy guys heave it all back onto the top of the engine. Hopefully the blower was held down with aluminum studs that are designed to break when an event like this occurs to keep the case from exploding ad potentially save the owner from even more repairs. It appeared to be a pretty clean break so that is probably the case.

Since these guys are literally just getting warmed up for a few months of action, stay tuned for a literal non-stop string of wacky, wild, and freaky videos from our hardcore hot rodding brothers in the Southern Hemisphere!

PRESS PLAY BELOW TO SEE A BLOWER GIVE UP THE GHOST AND MAKE A BREAK FOR IT!

A Short Strange Trip: Watch The Hagerty Buick Straight Eight Go From The Engine Stand To The Run Stand - Not Easy Cool It! This Look At The Meziere 20 GPM Remote Mount Water Pump Is Cool - So Many Uses!

2 thoughts on “Watch An Aussie Burnout Competitor Blow The Supercharger COMPLETELY Off His Motor!”