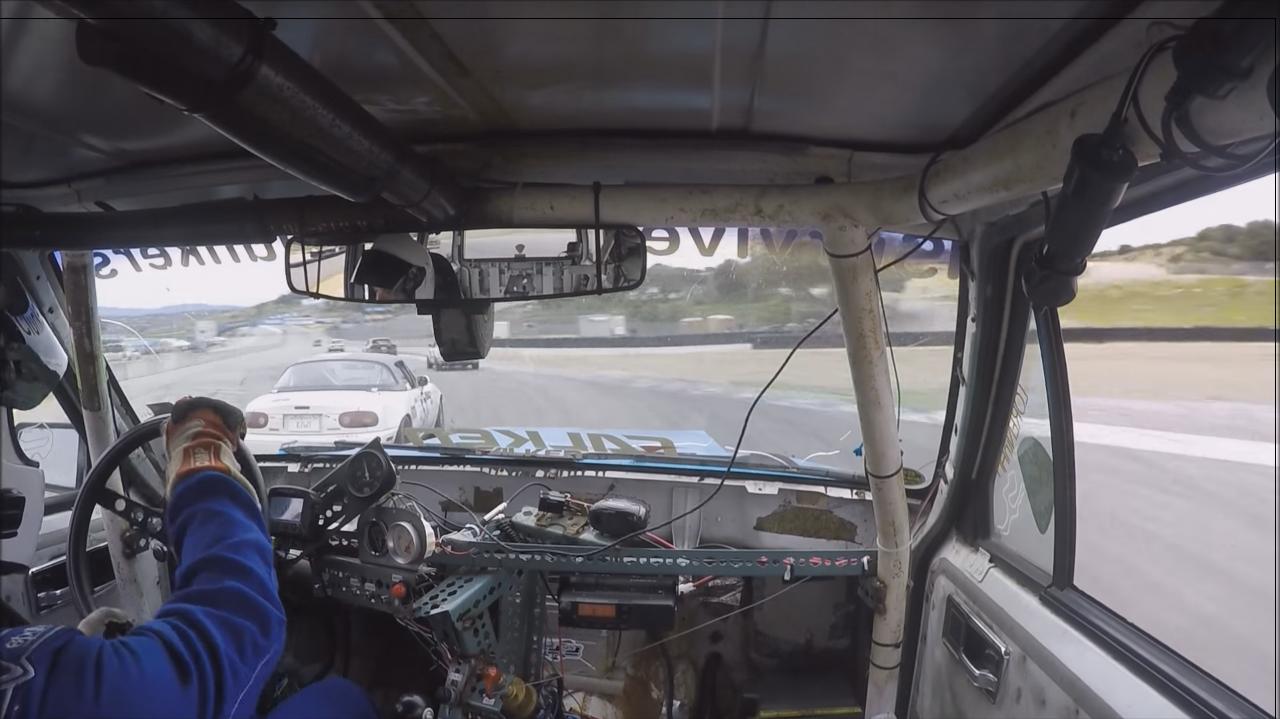 (By Eric Rood) – (Editor’s note: Welcome Eric Rood to the BangShift contributor clan. Eric will be sending stuff in to help support this leaky tuna boat. His tastes? Let’s just say that his tastes are a fitting compliment to the BangShift world. You may have read Eric’s work on Hooniverse, Roadkill.com, and in some sections of the Old Testament.)

This is just your ordinary, humdrum, run-of-the-mill video of a 1980s Jeep Cherokee ripping  past (and literallly looking down on) Mazda Miatas, BMW 3 Series, and Ford Mustangs around Mazda Raceway Laguna Seca in California last weekend with Lucky Dog Racing League. Not only did the Cherokee throw down a best lap time of 1:52.6—only three seconds slower than the quickest car, a featherweight Miata—it also finished fourth place of 37 well-sorted race cars in both of Lucky Dog’s seven-hour races.

As you might expect, Washington’s Petty Cash Racing have a background in off-road racing with XJ Cherokees so the XJ was a natural choice when they wanted to go road racing with the 24 Hours of LeMons in 2009. The same Cherokee ran its first few races with the indestructible (if anemic) AMC 4.0-liter straight-six and four-speed automatic transmission tugging around the old two-wheel-drive Jeep. A few years ago, the Cherokee racers threw in the iron-block 5.3-liter LS V8 from a Chevy pickup truck to make the “LSxJ.” While the power bump has livened up the VJ, the aerodynamic brick still has to pull along more than 3,000 pounds of Race Jeep with live axles and rear leaf springs.

More than 20 races into its existence, the Petty-blue Cherokee has racked up an unlikely handful of Top 10 finishes in the LeMons, Lucky Dog, and ChumpCar World Series. That included a class win and a coveted Index of Effluency award in LeMons. They likely would have scored a second LeMons class win if one driver hadn’t gorged on Red Vines before his driving stint with suboptimal results.

Of course, Petty Cash aren’t the first Jeep road racers with Bobby and Tommy Archer racing a pair of  amazing  Jeep Comanches in the SCCA’s Coors Racetruck Series in the 1980s. Some Texas LeMons racers have followed the sterling examples of their predecessors and also raced a Cherokee and Comanche in LeMons.

Jeep road racing: In case you didn’t know the meaning of the word “utility.”

Check Out This Wild Bounty Hill Footage From Tennessee! Many Try, Only One Succeeds! Sad News: The Ray Price Motorsports Racing Team Hangs It Up After 48 Years, Passing Of Price