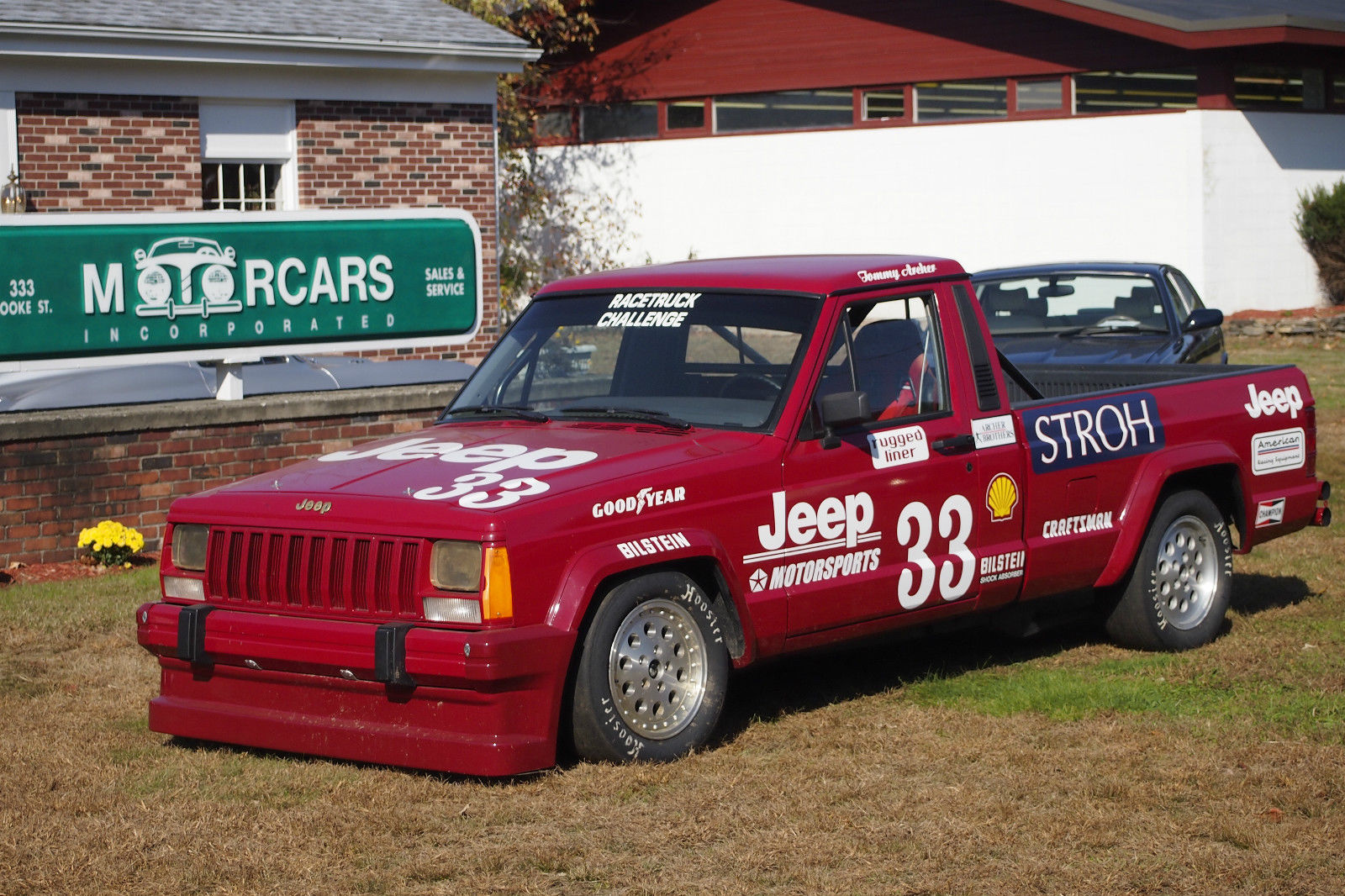 Bobby and Tommy Archer took a pair of 1988 Jeep Comanche trucks and dominated the short-lived SCCA Race Truck series. These trucks have been long lionized on the internet and by road racing fans for their success on some of the best courses in America. These championship winning trucks were the class of the field back in the day and beat trucks from other major manufacturers soundly. Powered by four banger engines with suspensions modified for road race domination these trucks were the pride of the Archer brothers in the 1988 season. After that race season, the truck was sold and sat dormant in a car dealership apparently.

Here’s what the ad has to say:

This is Tommy Archer’s 1988 Racetruck Challenge truck that went on to win at Lime Rock. Tommy sold the truck to Dom Papa and sat in Papa’s dealership showroom among other such beautiful, low millage examples of Dodge, Chrysler, and AMC automotive history. It changed hands in the early ’90s… it was moved to the showroom floor… battery disconnected… and it went for a long nap. Until this year, Dean Cusano Brought it back to life.

The truck needed a new bladder in the original fuel cell container ( ATL still had the specs from when the truck was built in their records) , The Goodyears, as raced on were all dry rotted, so  Dean just mounted a set that he had on hand – some Hoosiers.., a change of all fluids, replaced the cracked front spoiler with another that was new in a box in the back of the pickup bed, and a bigger racing seat as Tommy is kind of a skinny guy. The truck has been shown everywhere and ran the slalom event in the Papa’s Dealership parking lot that was hosted by The Jaguar Club of Southern New England.

According to the seller, the truck could be made road legal with the addition of headlights in place of the simulated stickers among a few other foibles….

-the truck runs, drives and has been driven locally  at slaloms participated at shows..

-the truck has plastic headlamp covers, it is not currently fit for the road, but it is able to be converted

-it has no horn, but the relay and wiring is in place

-the wipers work, the windows are in place and work, just the cranks are cut to clear roll bar

-the harnesses are working but out of date

-the fuel cell is brand new ATL and is ready to race, per ATL it is scca legal and probably will be for all sanctions

-it has pretty good Hoosier Street TD slicks on it now, but it should have Good Year street tires on it, that is how it is set up

-the rt rear wheel has a wobble in it, it should be straightened or replaced.

-we replaced the oil, the coolant and all the brake and clutch fluids, the gearbox and differential are clean, clear and like new

It is a cool, honest, fun piece of history.

We agree 100% that this is a cool, honest, fun piece of history!

SCROLL DOWN TO SEE SOME PHOTOS AND THEN HIT THE LINK TO SEE THE EBAY AD! 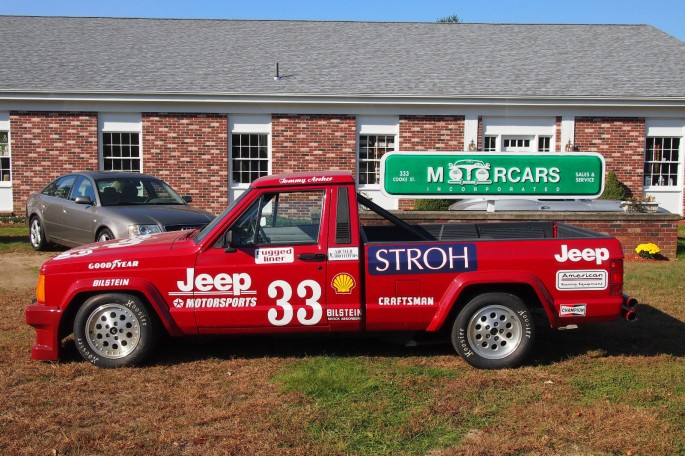 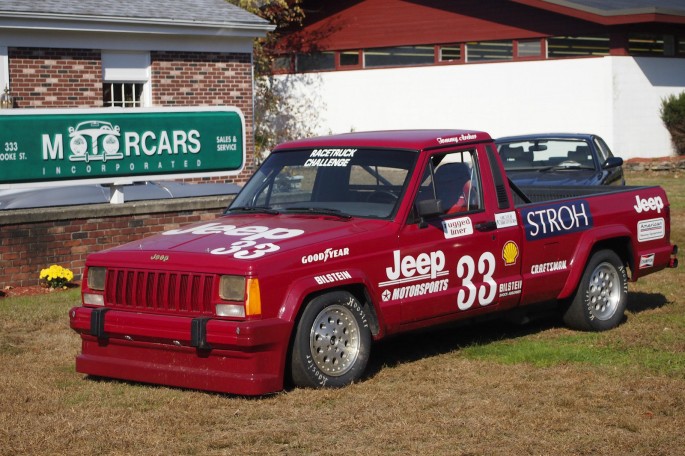 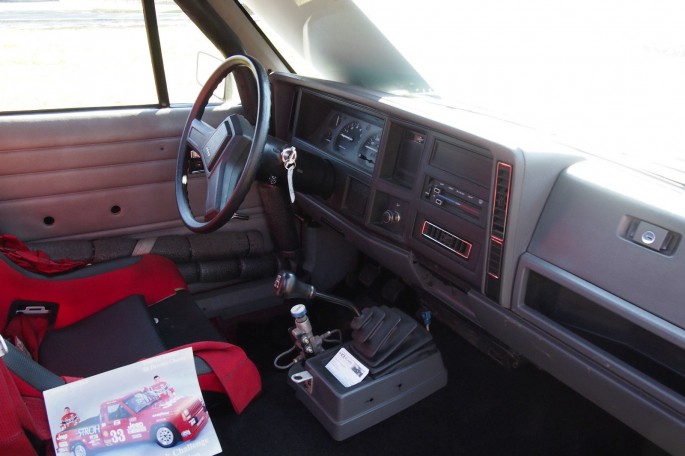 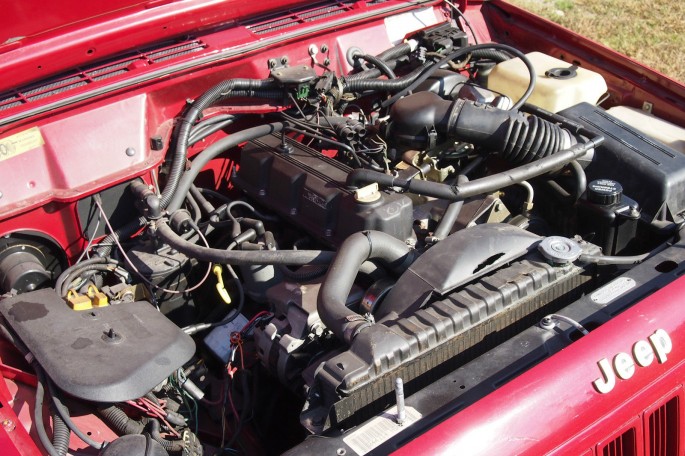 BangShift Question Of The Day: What's The Most Overplayed Look At The 2013 SEMA Show? SEMA 2013 - More Cars We've Not Shown You Yet From The Show! Inside and Outside!