Watch This Guy Crash His Honda S2000 At A Weird Autocross And Then Get Really, Really Mad About It In The Car 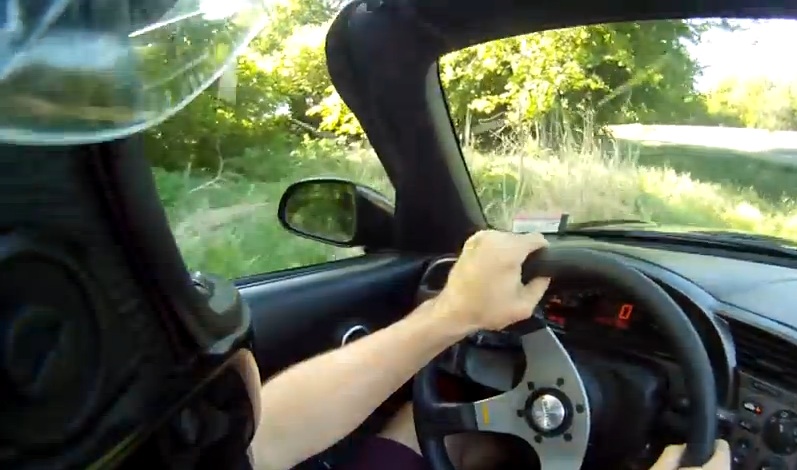 The Honda S2000 is a mean little car. In stock form they have small naturally aspirated engines that are capable of making incredible power for their size at motorcycle levels of RPM. We’re not Honda experts around here but if this is one of the earlier cars with the 2.0L engine capable of making like 240hp, the redline was something close to 9,500 RPM! In this video we see driver Zeke McCune attack an interesting and ultimately dangerous autocross course in his S2000. A testament to how peaky and powerful the car is, you’ll see McCune react quickly and save it when it tries to come out from under him about half way into this video. Things seem to be OK after that until McCune heads into a very fast slalom section that’s built on a straight road with virtually no runoff on the left side. As it happens, McCune loses the handle on the car and starts sliding to the left.

On the grass before he had any hope of saving the car, he was at the mercy of momentum and physics as he slid through tall grass and thankfully stopped before getting to a stand of trees. The truly creepy thing that you can see happening to the left is that McCune is mowing down fence posts that are holding up a BARBED WIRE fence. When the car stops you can see the evil steel wire pretty close to Zeke’s head. Imagine that getting up into the cockpit of the car and raking your face, arms, etc. This is like high stakes poker autocross. We’re not sure if Zeke’s car was the fastest one there that day but if there was machinery much faster than his, they stood a real chance of trouble through that fast slalom had they gotten loose.

Perhaps it is cruel but we did laugh at McCune’s reaction inside the car which is part adrenalin, part anger, part frustration, and part fear. We’ve all been sitting where he was during this deal with the overriding thought just being “don’t hit anything big”. Through the comments on the video we have learned that the car suffered some body damage but that was about it. The tires were fine, all the steering and other components were OK as well. If swearing isn’t your thing or your cubicle mate is a nun or something, skip the end or just turn the volume off. That being said, you’ll miss a key element of the show!

We’re glad Zeke was OK and we’re glad he posted this video so we could share it. We’d be leery of any autocross that gives you a solid chance to cruise through a barbed wire fence. Zeke probably agrees.

PRESS PLAY BELOW TO SEE THE HONDA HEAD OFF THE MOST DANGEROUS AUTOCROSS COURSE EVER – BARBED WIRE FENCE?! WARNING: SWEARING!

5 thoughts on “Watch This Guy Crash His Honda S2000 At A Weird Autocross And Then Get Really, Really Mad About It In The Car”