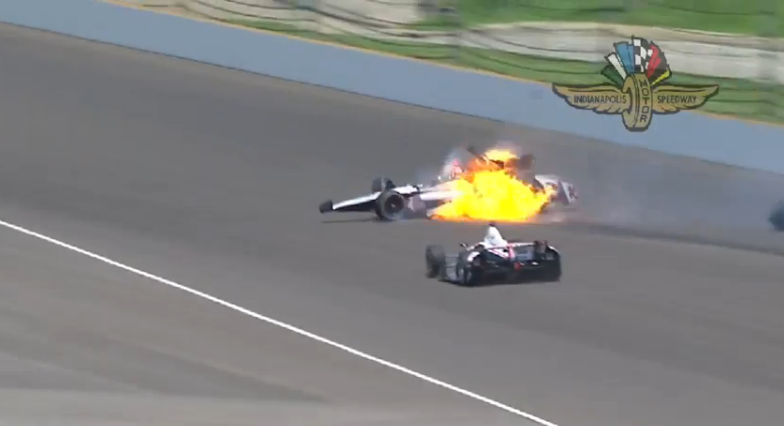 Kurt Busch is having a busy month of May. He’s been racing in the NASCAR series and testing heavily at Indy because this year he is going to run both the Indy 500 and the Coca Cola 600 next weekend on the same day. Very few guys have ever tried to do this and Tony Stewart was the last. We know that Busch is the kind of guy a lot of people love to hate but this effort he has put forth speaks volumes to us that the guy is in a very elite club of racers who can hang in open and enclosed wheel race cars. Dude’s got skills.

Busch has acquitted himself very well during the month of May in Indy. IMS is a tricky, tricky place to race. Yes, Busch has been there in a stock car but comparing the stock car to an IndyCar would be like comparing a bulldozer to the space shuttle in comparison to weight, driving style, and approach. Busch suffered a big wreck on Monday during practice at the Brickyard and even the wreck itself shows the inherent differences between a stock car and an IndyCar.

Often times you’ll see a guy in a stock car get the thing sideways coming into or out of a corner and drive through it. Through our experience of watching open wheel race cars, there is near zero chance to do that. Busch’s car wags the tail a little at the bottom of a corner and then drives itself straight up the track into the wall like it was being magnetized towards it. Busch barely had time to recognize that he was in trouble before the car was piling into the wall and bursting into flames, then sliding across the track aimlessly. You’ll see Busch hop out of the destroyed car, no worse for the wear and that is pretty incredible.

Here’s the rub, though. Busch had a pretty decent car. He was competitive and getting faster but that’s now completely out the window. The car his team had been tweaking on for weeks is in pieces and they are going to have to have something together for him for Friday and then the race this weekend. As we all know, just because things look, feel, and smell the same doesn’t mean that they’ll work the same on race day. They can tighten the nuts the same, turn the screws the same, and everything else but there’s no guarantee the car will act the same.