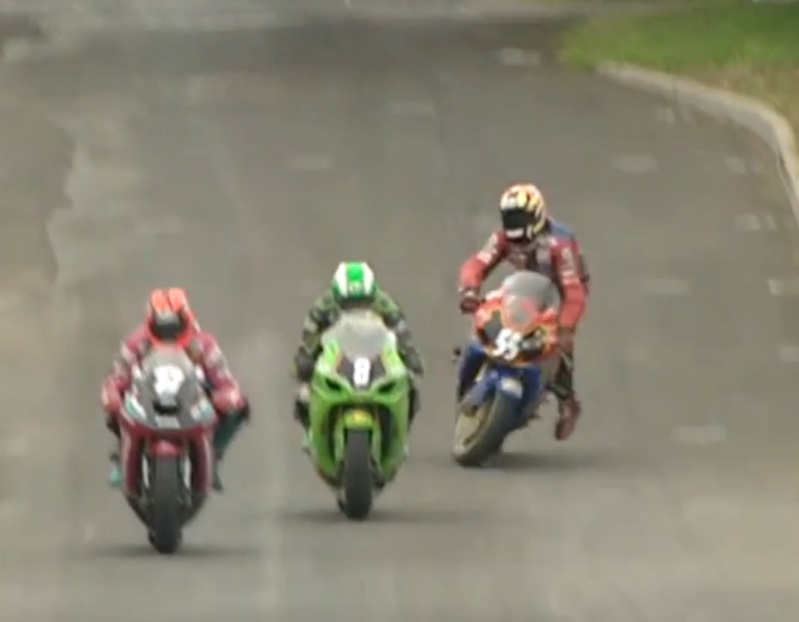 It is not much of a stretch to say that motorcycle racing is the  most internationally diversified style of racing in existence. There are multiple logical reasons for this like the cost of doing it, the fact the motorcycles are (in many places) vital transportation pieces so they are deeply engrained in the culture, and because people love watching insanely talented people do stuff like you will see in the quick video below. Firstly, thanks to Cody Jackman for tipping us off to the video and secondly thanks to Darran Lindsay for being an utterly amazing bad ass motorcycle racer because if you weren’t, they’d still be scooping you up with a spatula. This would have been one ugly kind of crash.

So what you are going to see was shot at a grand prix style motorcycle race in Ireland. There are three riders making their way down the road, more specifically over some crazy hills and they are packed very close together. Lindsay is trying to find a spot to make some ground on them and swings outside. After the riders crest one hill at tremendous speed, they hit a weird hump in the road that effectively acts like a jump. Remember, all of this is happening in a split second. The other riders hit it (maybe they saw it) but Lindsay catches air and the motorcycle lands cockeyed. Instantly it looks like the guy is doomed. There’s an immediate tank slapper and Lindsay is flopping around on the motorcycle like a child’s toy. Amazingly, he gathers the bike up and carries on with the race almost as quickly as the near disaster started. This is some madcap, wild, instinctual riding here and we know that if we were in that situation, we’d be splattered halfway to Belfast. Period.

What separates high level racers from the rest of us mere mortals on the track? This. This thing you’ll watch below, whatever it is makes them, them and us, us.

A BangShifter Abroad, Part 3: Finding Out Where You Came From Gumbo Video: A Bobbed 5-Ton Truck On Tractor Tires Pull a Monster Ford Out of an Impossible Mud Pit