Watch This Guy Cruise A Pulse Jet Powered Trike Like It Ain’t No Thing – Neato! 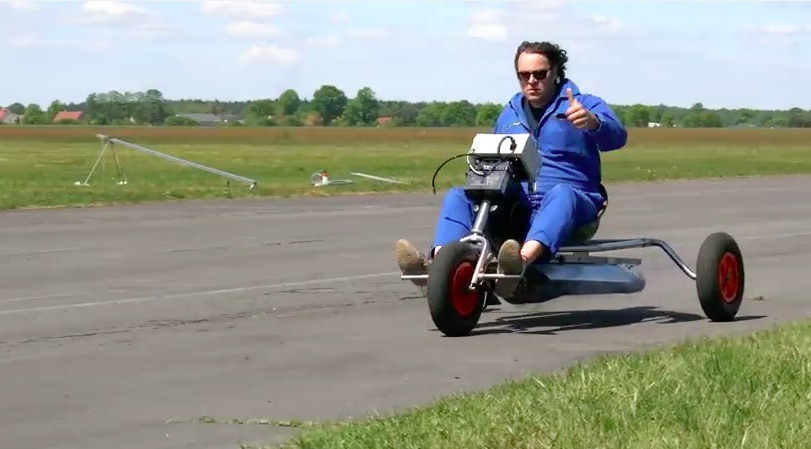 I know about as much about pulse jets as I do about 11th grade algebra or 11th grade science, history, ok everything but lunch. I pretty well dominated that. Anyway I am pretty sure that the basically principle here is that slow air comes in one end of the tube and really fast air comes out the other. The really fast air helps to make thrust and said thrust helps to push stuff along.

In this case we have kind of a weirdo trike looking deal. Using a leaf blower to provide the necessary initial air blast to get the thing lit off, it quickly turns into a noise and speed making kart that looks pretty fun to drive. There’s some sort of a control box on the front of it and we’re not sure exactly what it is doing but either way, the pulse trike really moves out. The operator is steering it with some low slung handlebars and as you will see, he is not afraid to make high speed turns with the machine.

Along with pulse jet trike guy, there is also little weird turbine powered trike thing guy zipping about. The whole video was made at some sort of a remote control festival or event. These guys are driving up an down what looks like an airstrip of some kind.

While he does not have a helmet, leather jacket, fireproof underwear, or even socks on, this guy does have a blue jumpsuit, some Ray-Bans, and attitude for days. He buzzes the crowd up close and personally a couple times. He’s throwing thumbs up all over the place and he’s acting just like what you would expect out of a guy riding a trike made out of what could be electrical conduit powered by a freaking pulse jet. He’s the boss of the day, today.

On This Day In History: The Atomic Bombing Of Hiroshima, Japan Drag History Video: The Story of the Double Trouble Twin Engine Slingshot

One thought on “Watch This Guy Cruise A Pulse Jet Powered Trike Like It Ain’t No Thing – Neato!”