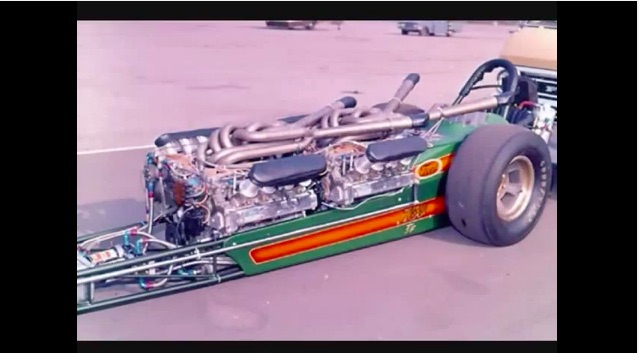 All old race cars have awesome stories to tell, some more than others. The Double Trouble twin engine slingshot dragster has really been three cars in its life. The first was a hard running, Hemi powered Top Fueler. The second was an incredible Fuel car with twin Ford Indy Car motors. The third (and current) iteration as a twin small block Chevy powered machine capable of running into the 7s. We’ve got the video to prove it.

The 1971 version of the car, owned by Jim Busby, is the most famous. It ran at the 1971 Winternationals, and never saw the track again. Powered by two 300ci OHC Ford Indy engines on nitro, it ran in the low 8s and got so much attention it was awarded the “best engineered” award by Wally Parks himself.

Busby later became really famous as a road racer in the ’70s and ’80s, but for our drag obsessed selves, he’s a total hero for building the Indy engine version. Depending on who is telling the story, the car (with those two engines) was worth about $100,000 in early ’70s dollars (an insane amount for the time), or he bought the engines for about $3,000 each due to a rule change that rendered them useless. We like story two because it’s more our speed.

The whole history of the car is laid out in this great video filled with vintage photos and descriptions of the journey the car has taken over the last forty plus years.

Watch This Guy Cruise A Pulse Jet Powered Trike Like It Ain't No Thing - Neato! Cool Video: There's A Locomotive Graveyard Deep In The Woods Of Maine - This Is Awesome