Watch Tim Bell’s Massive 150mph, No Brakes Wreck From The Circuit Of The Americas Through An In-Car Camera! What A Shot!

Sep 26, 2014Brian LohnesApex Video, BangShift APEXComments Off on Watch Tim Bell’s Massive 150mph, No Brakes Wreck From The Circuit Of The Americas Through An In-Car Camera! What A Shot! 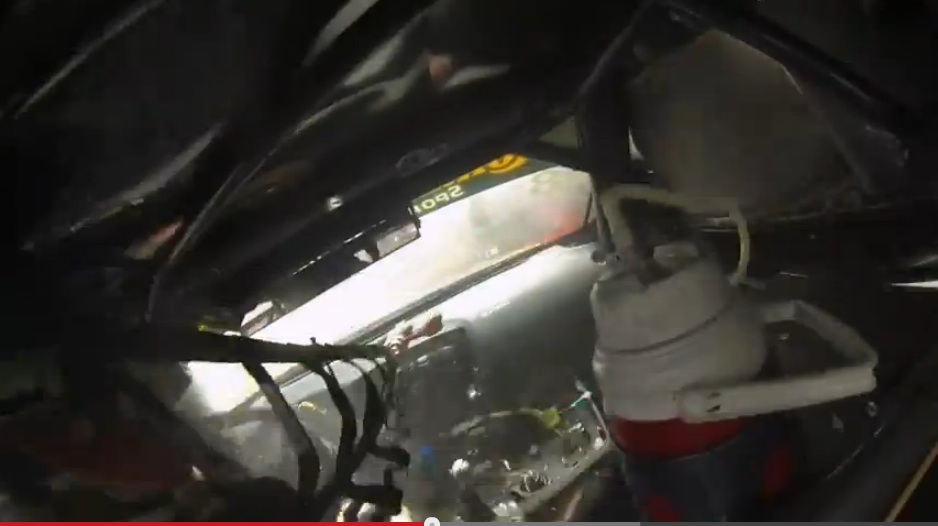 Last week we showed you video of race car driver Tim Bell locing his brakes and crashing into a SAFER wall at the Circuit Of The Americas at a speed we guessed was well over 100mph. As it turns out, Bell left the race track at 154mph with zero brakes and a 100% chance of a “sudden stop at the end”. We got tipped off to the recently releases in-car vantage point of this crash by BangShifter Scott Brown and after watching it, we’re even more impressed with both Bell’s ability and the ability of a SAFER wall to stop what would have otherwise likely been a fatal wreck.

The video follows the start of the race and the action leading up to the wreck. You can skip to 1:30 if you just want to see the carnage but there’s some value in the other stuff. You’l  see Bell weaving through the field and gaining positions before the nightmare starts. You’ll see his Nissan 370Z actually eat up some Camaros and other stuff during the early stages of the race. Believe it or not there’s no indication of a braking issue until the moment that Bell tries to woah down for the end of the long straight. If we had to make a PURELY speculative guess here, you’ll see him clip some curbing before getting on the long straight and that may be where the brake pushrod comes out or something as catastrophic as that because our man has ZERO brakes when he tries to slow down. NONE.

Bell heroically avoids all of the other cars by inches as he streaks past at 150+ mph, pitches the car sideways in the gravel and drives that sucker right up until it smashes into the wall, stopping in the span of just a couple of feed from a terrific speed. He even seems to try to start the thing seconds after the crash but the car is pretty jacked up. Safety crew arrive, he knows where he is and claims that he is unhurt….pretty incredible especially when you see how had the shot was. We believe that if this car had the same impact with a guardrail or concrete wall, Bell would not be here to share the tale today. This is a BIG shot.

PRESS PLAY BELOW TO SEE TIM BELL LIVE THROUGH EVERY RACER’S NIGHTMARE – 150MPH AND NO BRAKES!

Friday's Reasons To Go Home And Drink: Cadillac Is Out Of Names and Bieber Is The New K.I.T.T. Our Last Blast Of Photos From the 2014 Extreme Outlaw Pro Mod/NOPI Event At Atlanta Dragway