Watching This 1969 Chevy C30 Flatbed On The Autocross Course Is Both Hilarious And Tiring – This Driver Was Working Hard!

Dec 04, 2014Brian LohnesApex Spotlight, Apex Video, BangShift APEXComments Off on Watching This 1969 Chevy C30 Flatbed On The Autocross Course Is Both Hilarious And Tiring – This Driver Was Working Hard! 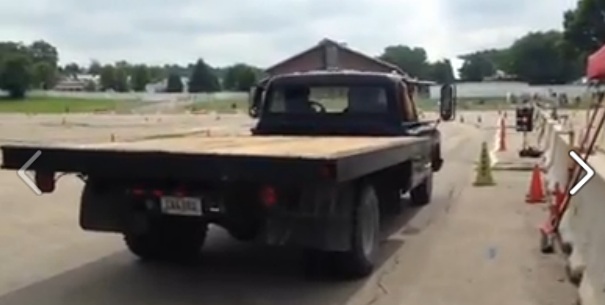 As you know, we love hot rodders with a sense of humor, we also love old trucks, and we love when guys get off of their asses and beat the crap out of their projects. All three of those bases are covered in the video below which was taken at the Goodguys show last weekend and we think you’ll love it as much as we did. Scott Brown tipped us off to this one and for good reason, it rules. The driver of the truck isn’t of the mindset that idling the thing around is fun so he attacks the course with zeal. When you see him working the steering wheel like it is on fire at several points on the course, you’ll probably side with us and believe that this truck is a manual steering model. Even the slowest power steering box known to man has a more favorable ratio that what this guy is dealing with.

The truck sounds great. We’re not sure if it is big block or small block power, but there is definitely some grunt under the hood because when the guy stands on the pedal, the old Chevy roars along pretty well. Obviously the biggest issue is the fact that the truck is about as comfortable making high speed turns and quick movement changes as Abe Vigoda. His passenger assumes the typical passenger position in an bench seat equipped vehicle on the autocross by clinging to the roof with one hand out the window. As you will hear the announcer say, this was not the only run they made on the day the video was made. They had so much fun the first time that they came back out for more!

The only people that could have been miffed about this truck were the guys resetting the cones because the barge made a whole bunch of those cones hurt. Lastly, it looks like it nearly ran over the timing lights. That doesn’t go over big…at all. Near party foul aside, this is some fantastic video!

Post by Carrie Olson Strange.
Place Your Bets For A BangShift Shirt! Buford T Justice Is Hitting The Dyno With This Engine One Last Time - Guess The Power And Win Video: Dragster Spins While Backing Up, Crashes Into Wall, Smokes Tires Till They Pop