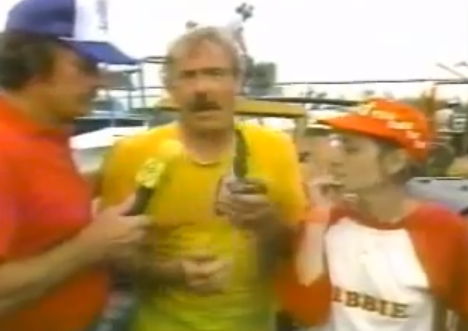 Two things that we’ve made abundantly clear since BangShift started are (1) Steve Evans ruled the roost when it came to racing announcers on TV and (2) watching Swamp Buggy races on TNN’s American Sports Cavalcade as kids cemented our odd obsession with a uniquely cool form of American racing. This six part video is apparently a digital version of an ancient Diamond P tape that chronicled every year of their swamp buggy coverage from Naples, Florida. The commentary is pithy and hilarious. Evans and Yates poke good natured fun at the competitors, fans, vehicles, and scene around the admittedly weirdo swamp buggy races. In a twist we never knew about and only wish Evans were still alive to interview him on, there is video of him competing! He drove a four cylinder Jeep in the “little feature” at one of the races they covered in the early 1980s. It is hilarious and awesome.

As the years go on and both Yates and Evans become more and more comfortable with the “usual suspects” like Lonnie and Leonard Chesser, David Sims, and Terry Langford, the fun continues and the jokes get better. In the signature way that they always did, Evans and Yates manage to respect the competition and people while also playing on all of the foibles they both share. It is brilliant and hilarious.

These buggies are no joke. Back in the early 1990s the heaviest duty machines were packing 1,000hp Rehr and Morrison mountain motors. OOGA BOOGA!

This is GOLD! Watch them all!

More Frozen Turkey: Watch Russian Guys Drag A Sunken SUV Out Of A Frozen Lake With Logs, Rope, And Human Power! Stuffed Turkey: The First Mustang Was Built In The Late 1940s, Not By Ford, And It Looked Like This - Cool Story!