Stuffed Turkey: The First Mustang Was Built In The Late 1940s, Not By Ford, And It Looked Like This – Cool Story! 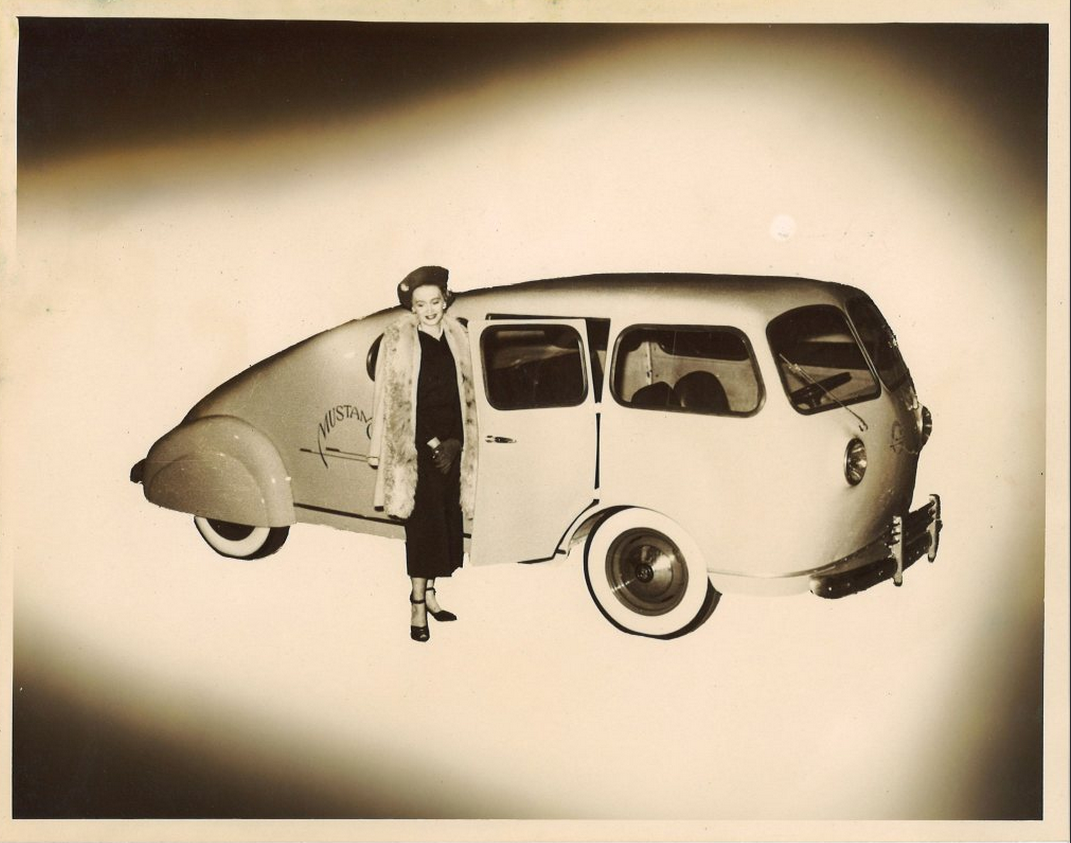 Ford is set to reveal the 2015 Mustang on December 5th and we’re in for a year of Mustang celebrations because 2014 is the 50th anniversary of the famous pony car’s debut. What if we told that that the Ford Mustang wasn’t the first “Mustang” at all? What if we told you that the first Mustang was built in 1948 by a guy in Seattle, Washington who later went on to sue Ford for $10,000,000 in damages over the use of the Mustang name? It is all true and we’ve found the photos and documentation to back it up. The first Mustang was the brainchild of Roy McCarty, a service manager at a Lincoln dealership and a thinker of large proportions. He had come up with some theories on how to build a cheaper, safer, better car for the masses and he decided to pursue them. On paper, his logic was unassailable. He planned on using parts that were already in manufacture for every system of the car and he’s adapt them to fit. Steering from a Willys Jeep, engine from Continental, Spicer axles originally intended for some other car. The benefit was cost and ease of access to repair parts and service items. The downside is that Roy McCarty didn’t have a lot of money and launching a car company from a far flung corner of the USA was no small job.

While we have found the production numbers for the original Mustang to run from a low estimate of one to a high estimate of 12 and Ford’s example has sold 10s of millions of copies, we think that this story has historical value, especially because  it seems like Ford basically took the attitude, “C’amon and sue us if you want, we’ll bury you.”

The tale of the first Mustang is best told through historical documents and information provided by Tracy McCarty, the wife of Roy McCarty’s grandson. She has posted virtually everything that she has on the car and the below images are from her collection. We love the fact that the family has held onto this stuff, and they should. If we had a member of our family who had the gumption and drive to start his own flippin’ car company we’d keep every morsel of that history as well.

Read on for the story of the original 1948 Mustang….

Roy McCarty had to have known that a major league sales job was going to be required to convince the public that they needed to buy the oddest looking car of 1948 and make it a part of their life. We say this because the Mustang company put out some really creative advertising and educational materials to show exactly why the vehicle was designed and shaped like it was. Pacific Car and Foundry was responsible for building the first example of the all aluminum body. These two posters below explain the logic behind the “whale” shape of the Mustang.

Interestingly enough, a near identical car built by Fiat, called the Multipla would hit American shores in the mid 1950s. We don’t really believe one design influenced the other but the Multipla didn’t exactly fly off the proverbial shelves, either.  As you will see, the design was not an accident and lots of thought went into the whale like shape of the car. Hell, you’ll see that some of the promotional literature embraced and promoted that shape! Here’s how it went down… 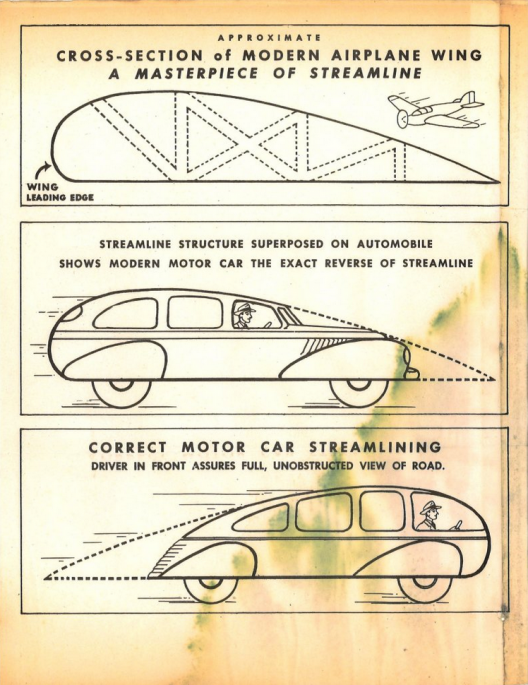 Then he talked safety – 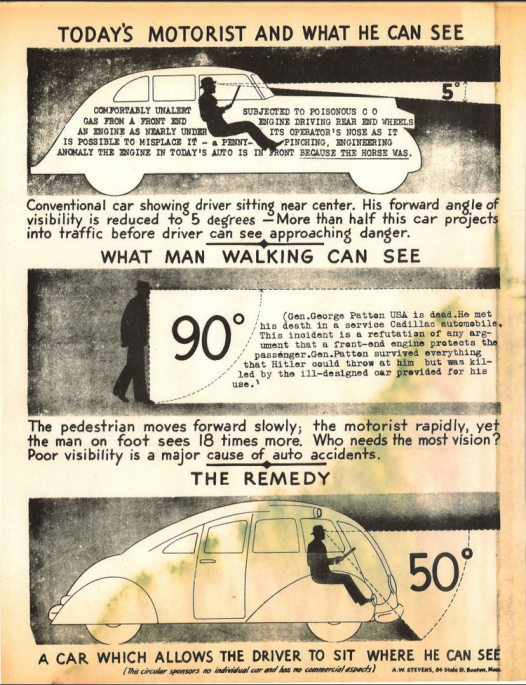 An interesting top view of the 1948 Mustang – 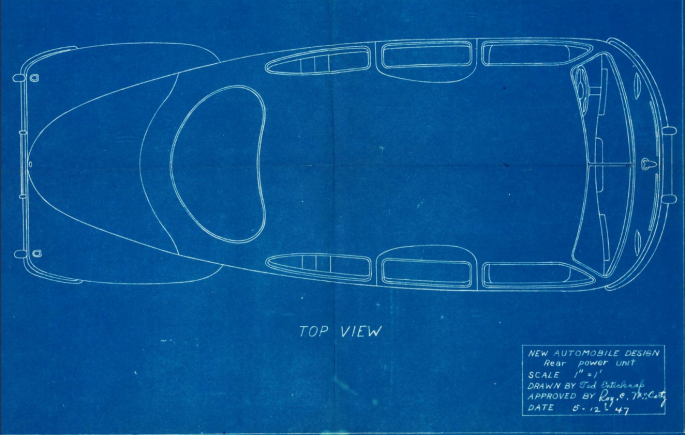 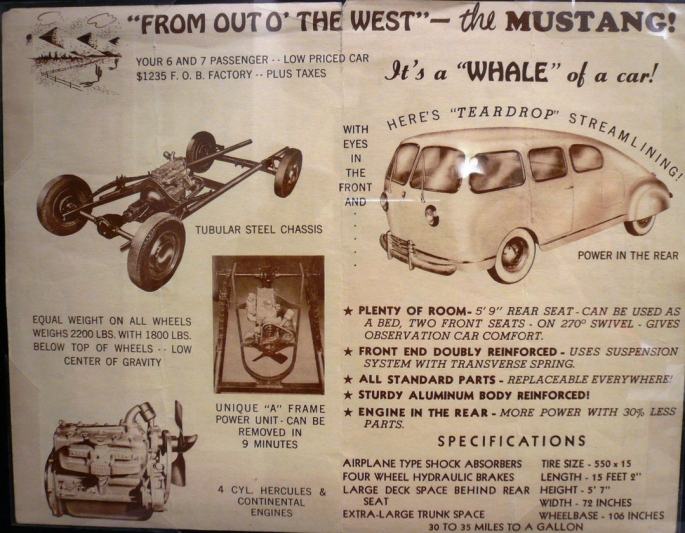 As you can see, the chassis design and layout was amazingly simple and we dig the fact that the company was touting fuel milage of between 30 and 35 MPG out of the Mustang. That was partially due to the low (2200lb) curb weight, we’re sure. The four banger Continental and Hercules engines wouldn’t exactly be fire breathing but they would have moved the Mustang down the road well enough. Shorter gearing would have helped it to get up and go but we’re thinking that highway speeds would probably be limited to the 55-60mph zone.

As a promotional tool, McCarty had a band travel all around the west in a Mustang car and perform gigs to raise awareness about the machine as well as his budding network of dealers. 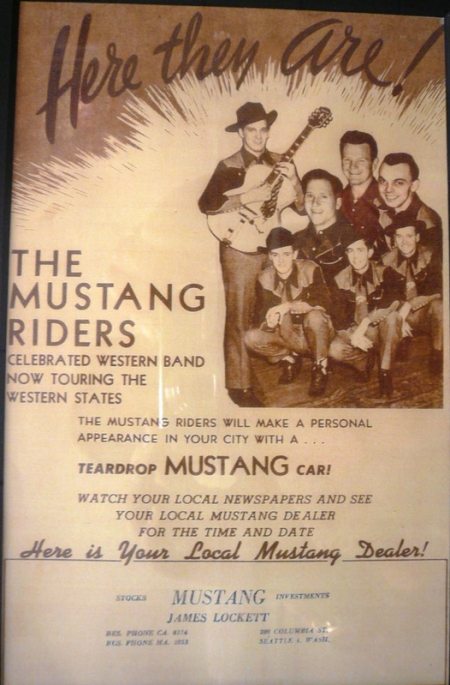 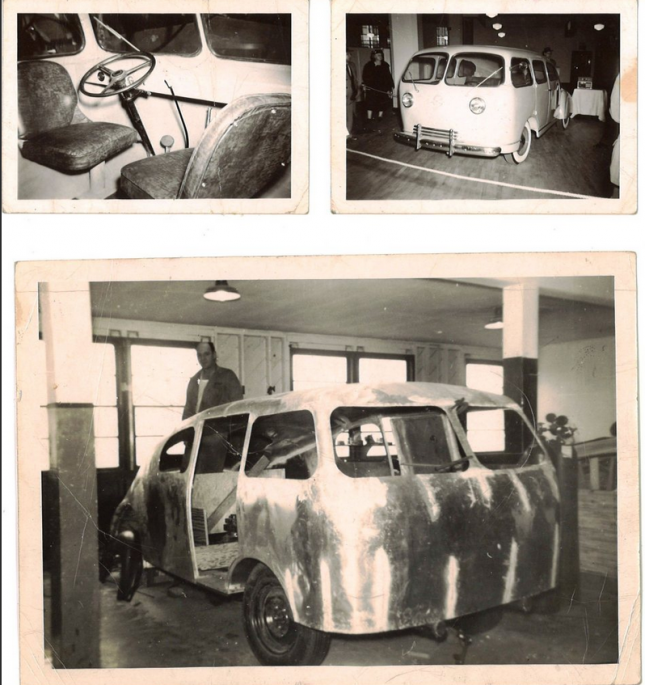 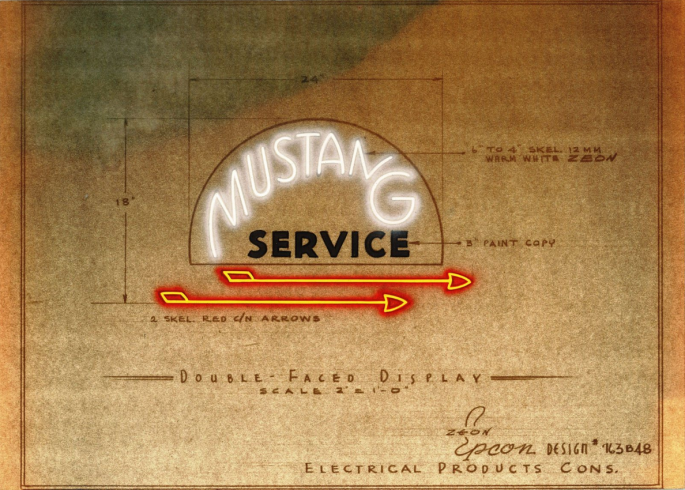 With Mustangs on the road as promotional vehicles and working prototypes proving the car out, McCarty went into cash raising mode to fund company expansion. Sadly that expansion never came and from everything we have read, a maximum of 12 1949 Mustangs were actually built. Here’s a stock certificate for the company – 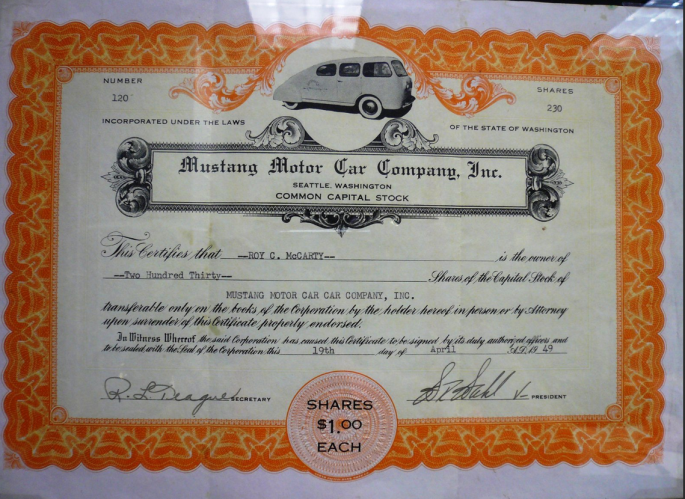 1949 was going to be the breakout year for the company but instead we think it was just the year the company went broke. 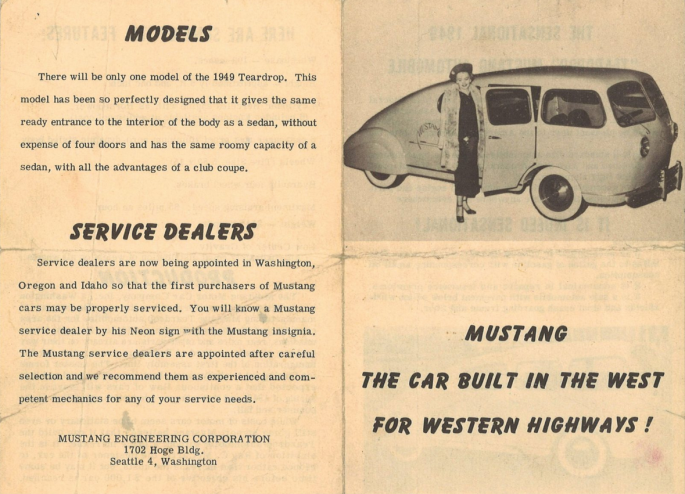 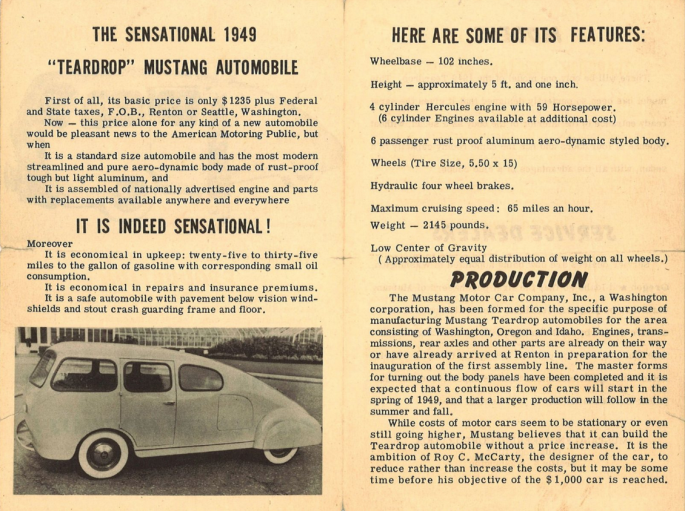 So the Mustang Teardrop went on to become one of many innovative but ultimately failed automotive manufacturing enterprises that have sprung up since the dawn of the automobile. There is one known to exist today in a private collection. Here’s hoping that there are 11 more floating around out there as well. We’d tell you that this is the end of the story but it isn’t. Roy McCarty resigned from the board of directors of the company that he started in May of 1949, but he was still the guy that named the Mustang in the first place and got things like a Trademark.

When Ford rolled out their new 1964 1/2 Mustang for the world to see, there was lots of excitement…and one guy in Washington State who had a legitimate complaint about the use of that name. The guy was Roy McCarty and he went after Ford for the none too small sum (in 1965 dollars…or any year dollars!) of $10,000,000! 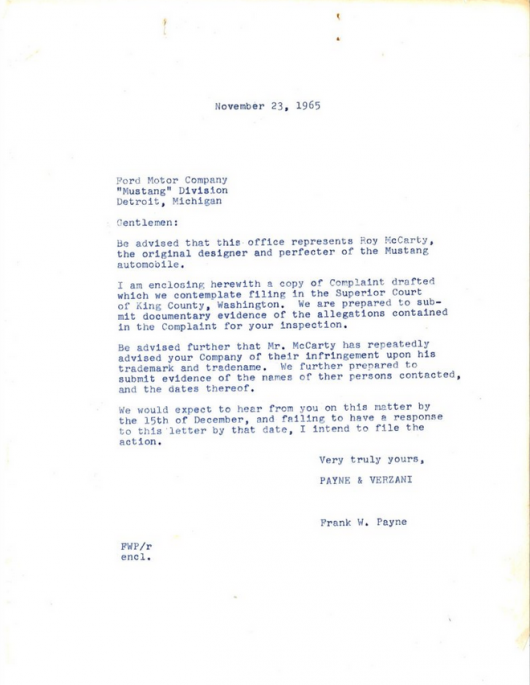 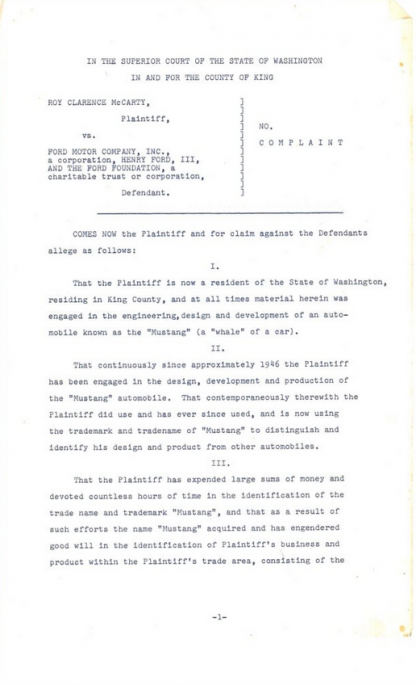 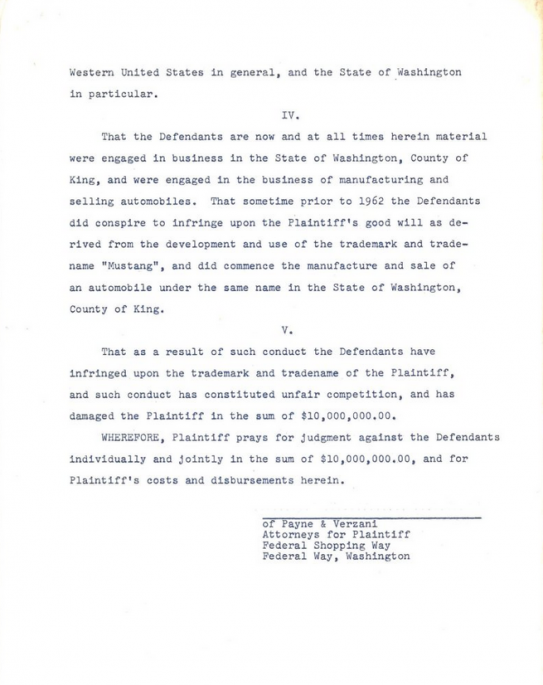 At this point, a chain of letters between McCarty’s lawyers and Ford’s lawyers started back and forth. There’s no indication that Ford ever paid McCarty anything or even took his claims seriously. This seems like a clear case of the huge company swatting off a legal complaint like a fly. Here’s a few of the back and forth letters that McCarty’s grandson’s wife has scanned and posted – 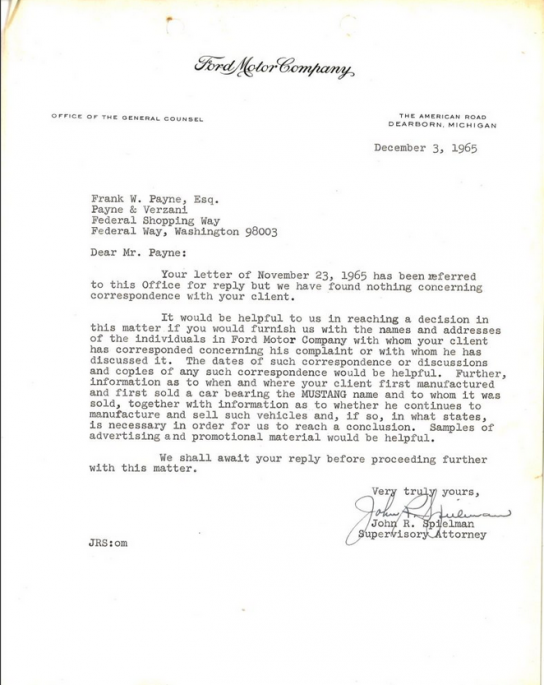 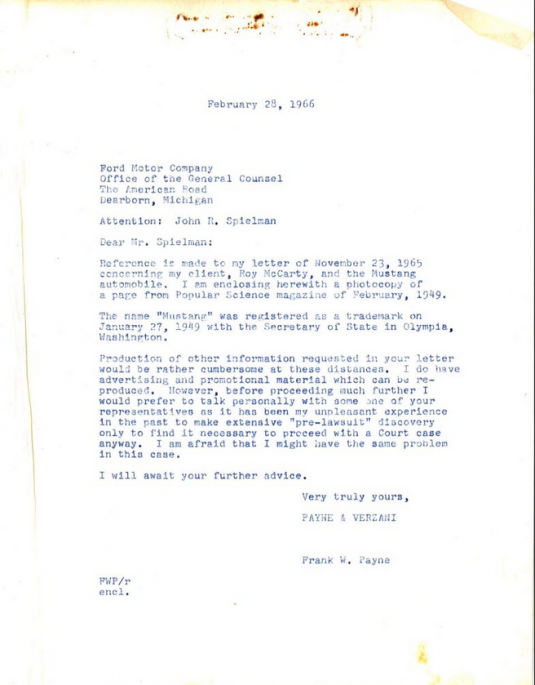 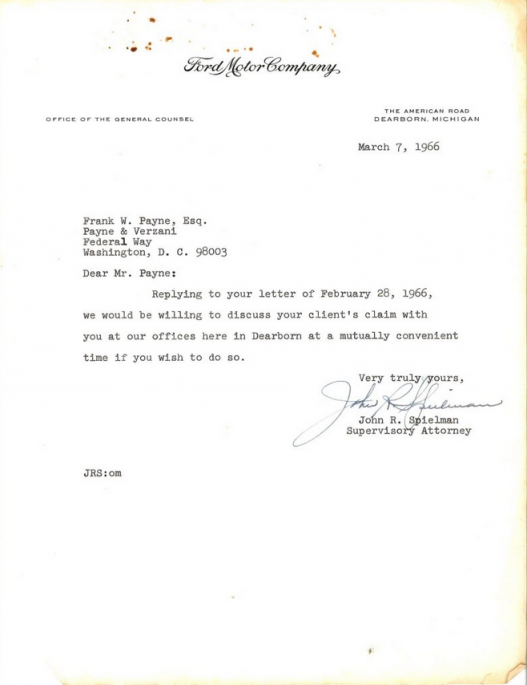 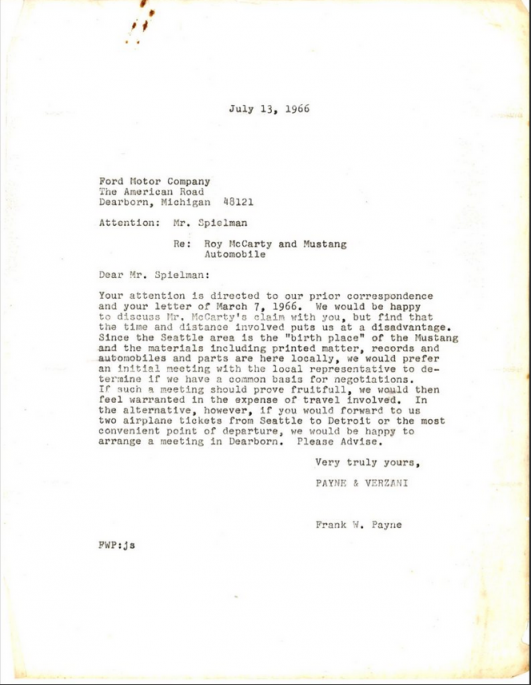 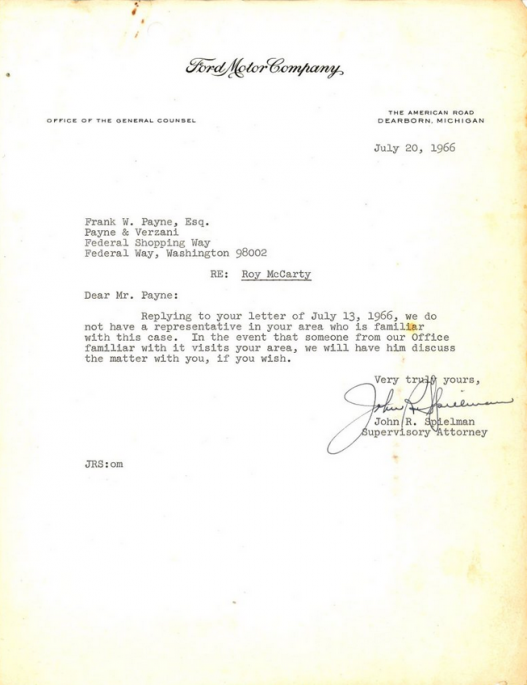 So that’s where our trail goes cold on the whole story of Roy McCarty’s neat automotive venture, the Mustang “Teardrop”. We had never heard of such a car or the lawsuit that McCarty filed until we were talking to an old timer friend of ours who mentioned the whole episode. Initially we thought the guy had gotten into the spiked egg nog a little early this holiday season but we were wrong and he was right. As they say, “Old guys rule.” 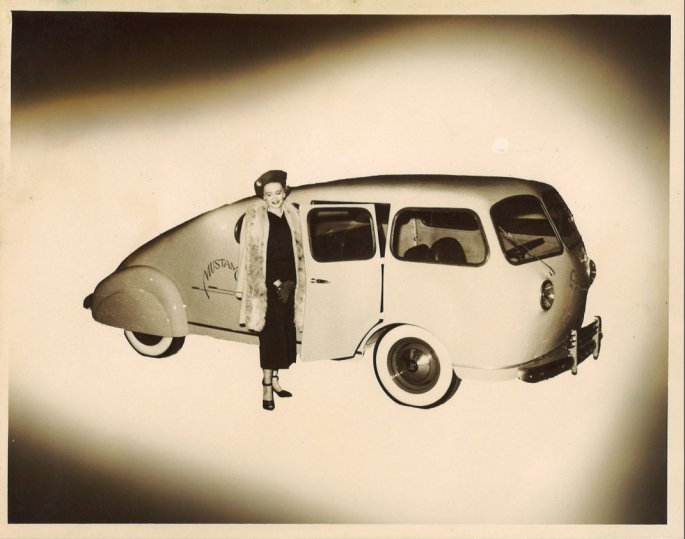 2 thoughts on “Stuffed Turkey: The First Mustang Was Built In The Late 1940s, Not By Ford, And It Looked Like This – Cool Story!”