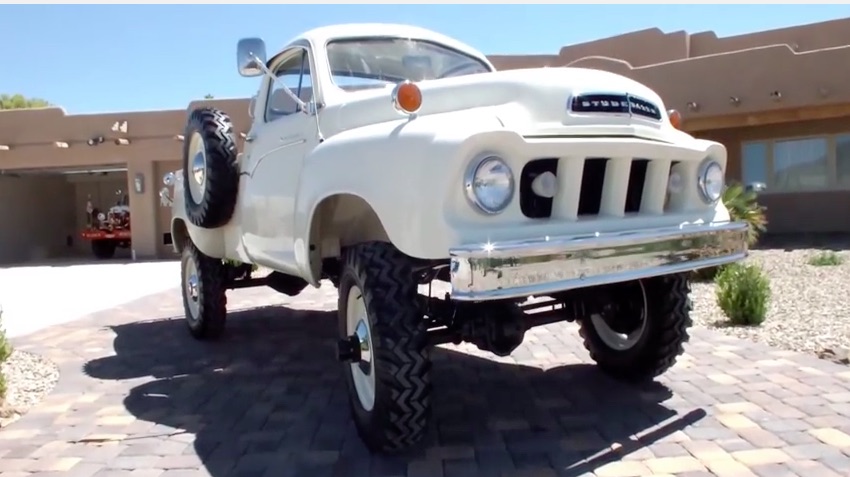 Late 1950s Studebaker trucks are awesome to begin with because of their styling. The rounded cabs and fenders that most manufacturers had abandoned were still front and center on the Stude trucks and they had a great reputation for toughness as well. For the 1959 model year, Studebaker wanted to highlight the fact that customers had the option of ordering NAPCO four wheel drive for trucks that would see severe duty in environs where it would be needed. Rather than just run print and radio ads to promote this fact, Studebaker built a heavy duty demonstrator model and sent it out across the country to show how robust and capable a machine it was.

Being a demonstrator, clever sales execs were always looking for something noteworthy for the truck to do. Perhaps the most noteworthy accomplishment attached to this very truck is the fact that it once climbed the Capitol steps in Washington DC at idle, in low range, with no driver as a show of how great the NAPCO 4×4 system was. Risky business, right?

It was interesting how they optioned this truck because it is virtually frill free. There’s some chrome trim on it but after that the thing is pretty basic. The flathead six engine is a rarity as apparently five were ordered like this with the rest taking the V8 option we’re guessing. The parchment white paint is a personal favorite.

This video is cool because it takes us through the history of the truck while showing off basically every aspect of the rig in the process. You really don’t get a good idea of the overall size of the truck until we see the machine driving down the rod. That angle gives some good perspective on just how tall this milk white Studebaker is!

BangShift Question Of The Day: What Phantom Tuner Car Would You Love To Be Real? The Grand Tour's Richard Hammond Escaped This Monster Crash With A Fractured Knee