(Words and Photos by Scott Liggett)  Ever come across a vehicle or an old building and see right past the obvious, to what it could be with just a little imagination? An old abandoned gas station could be redone into a cool retro hot rod shop? How about an old fire station to be a gearhead’s warehome?Keeping with the fire department theme, me and a buddy came across this old Chevy C60 fire truck, that we think was once a crew hauler from Ainsworth, NE fire department. 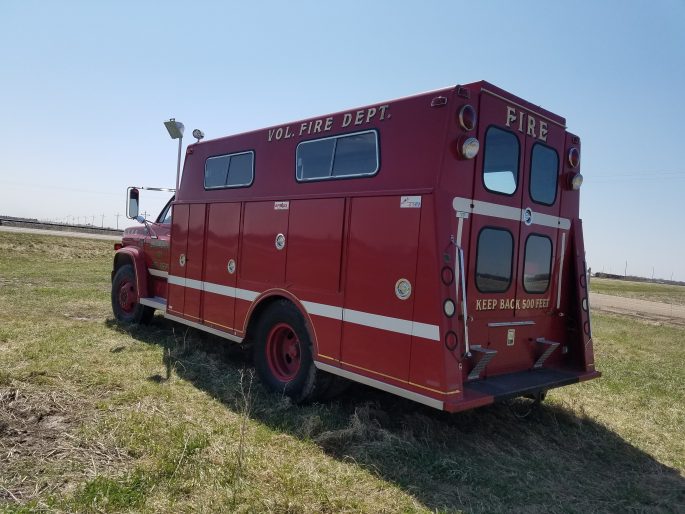 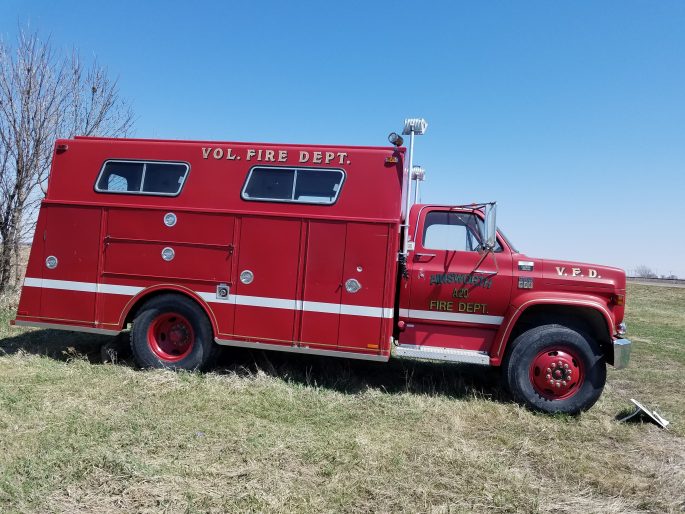 The wheels were spinning to all cool things that could be done to this old fire rig before we could turn around to get a better look at it. What we were thinking was a vehicle to haul the race car to the track. Sure, you could buy a 3/4 or 1 ton pickup and find some enclosed trailer to haul all your tools and your race car. If you don’t mind spending quite a bit of money and being no different than anyone else. Your author was never rich person, so imagination and ingenuity were required in order for me to own muscle cars and race them. 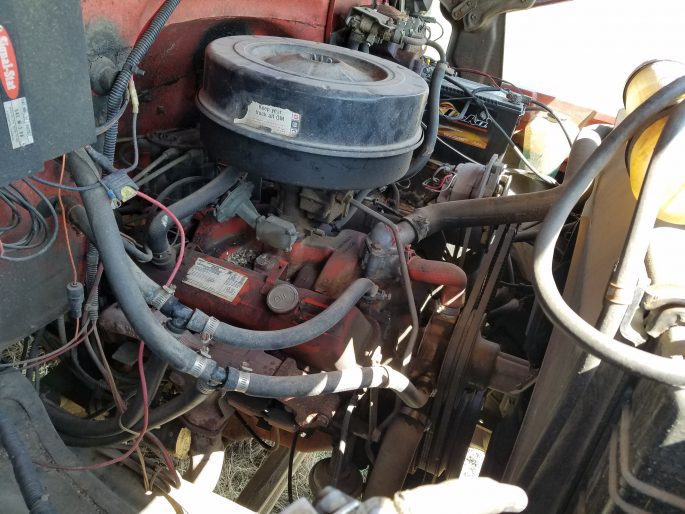 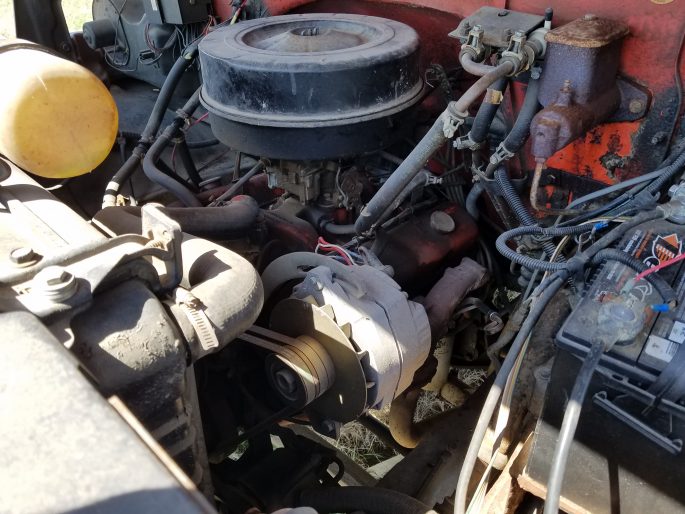 We were surprised when we looked under the hood of this early 70’s Chevy C60 fire rig and found a small block Chevy with a 2 barrel carb instead of some kind of diesel engine. This wouldn’t be our first surprise when inspecting this vehicle. The small block certainly isn’t a torque power house, but it will get the job done moving this truck and a car trailer. 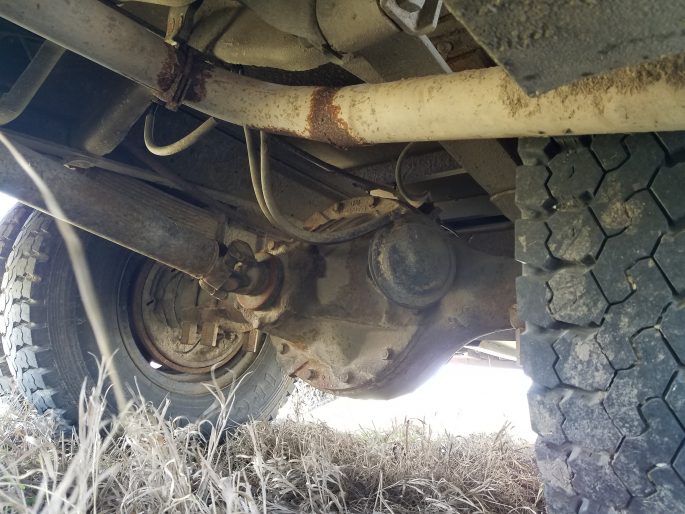 Behind the 350 was the popular granny low SM465 four speed transmission and an air shifted 2 speed rear differential. We’re pretty sure it was geared pretty steep that even with the two speed differential, top speed wouldn’t be much more than 65 mph. 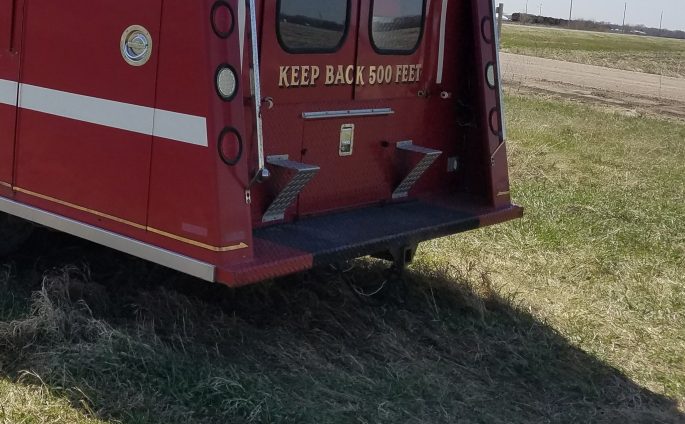 Out back we found the truck already had a hitch installed. One less thing to do. We couldn’t find a weight rating on it, but I am sure it would haul a car trailer. 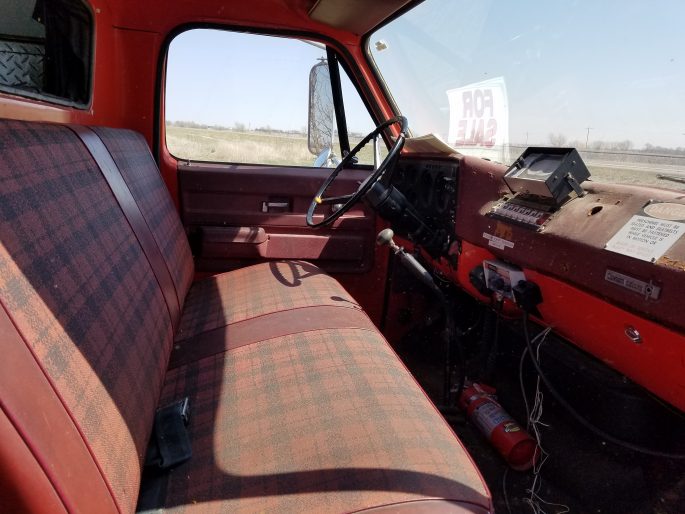 The truck was unlocked, so we peaked inside. The interior pretty darn good for a 40 year old truck. If it wasn’t for the Eau du Rodent smell coming from the glove box, it would’ve looked like it was in use a short time ago. 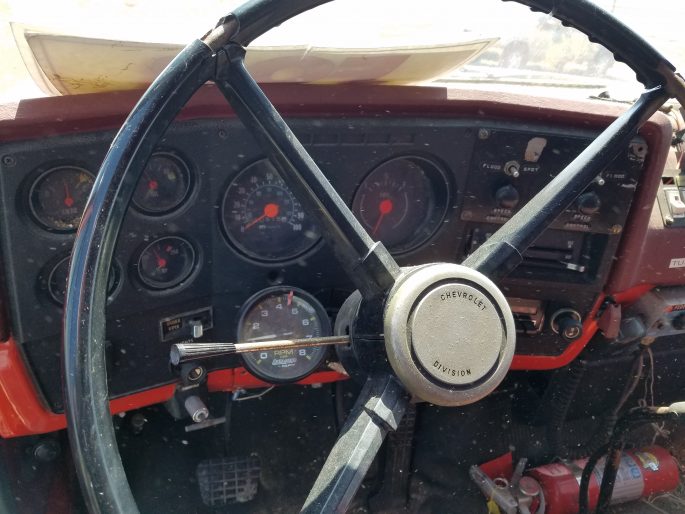 The mileage on the odometer read 10300 some odd miles. We honestly couldn’t be sure if that was original, as fire equipment are kept up religiously when in use. It wouldn’t have mattered to us. 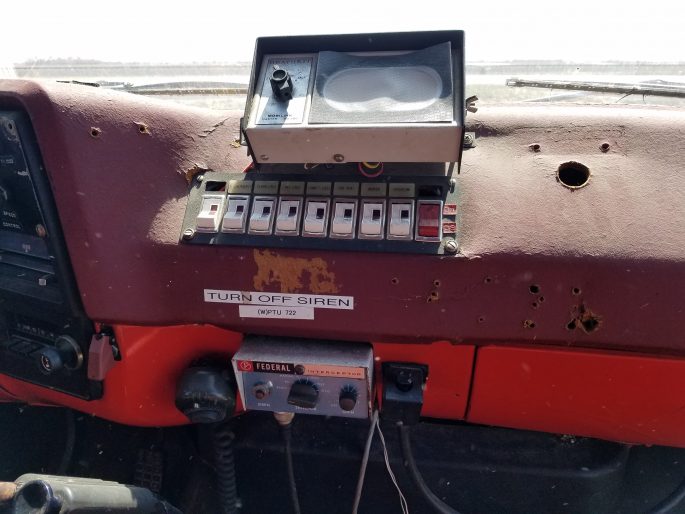 The original Federal radio was in there. As well as some really old intercom box to the rear passenger area. The dash was left with a bunch of holes were more equipment or electronics were once mounted, but removed. Most likely the modern, expensive stuff fire departments use.
Up to this point, we were just looking at an old fire truck. Our wheels didn’t really start spinning to the possibilities that the truck could be become until we started looking in the storage compartments. 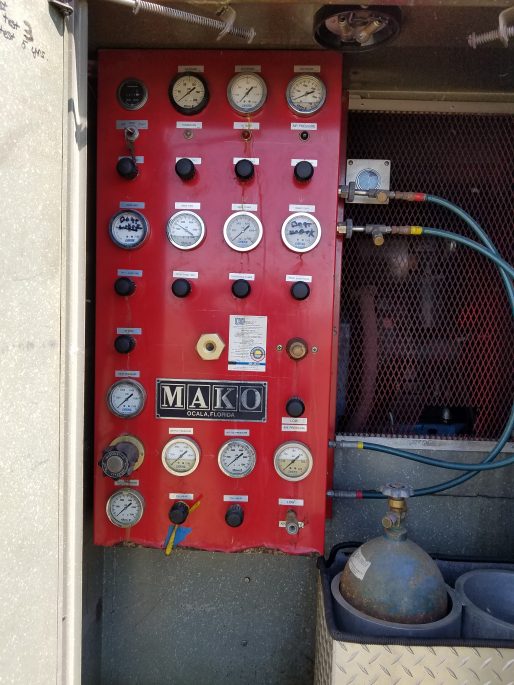 The first door we opened had this monstrous diesel powered air compressor. This thing was serious and filled the entire area behind the cab. It was also weird seeing a diesel powered compressor with gas powered engine. For our idea of a  track day hauler truck, this compressor would handle any tools you would need to maintain, or repair, or hell build a race car right at the track. This thing looks like it could air up every tire used at a NASCAR race. It had to be for refilling air tanks for fire crews. 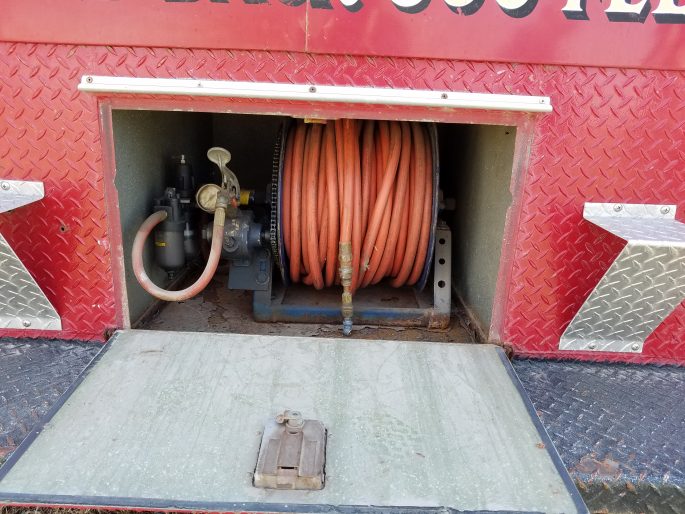 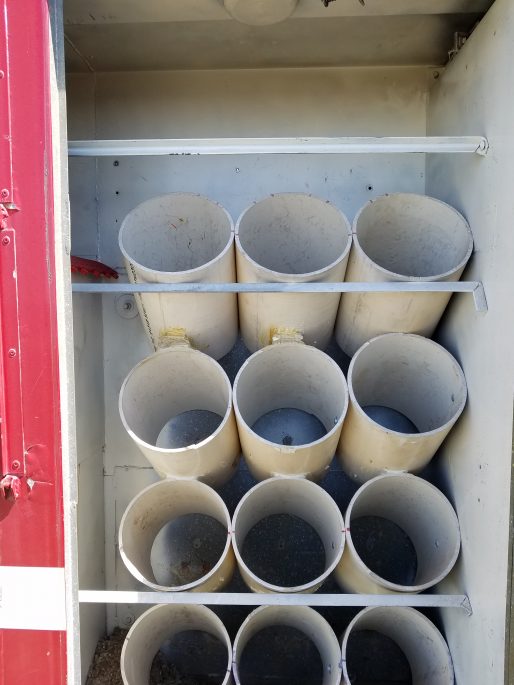 The door nest to the air compressor on that side just had these PVC tube holders most likely for holding spare air tanks. Suddenly, I was thinking spare nitrous bottles. How about a mobile nitrous filling station? 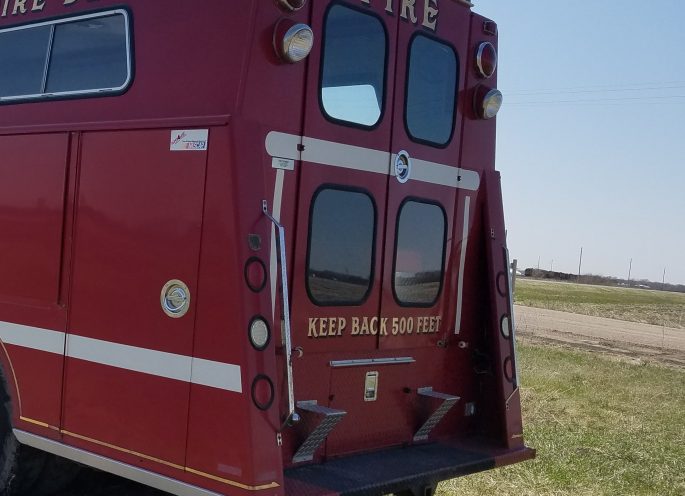 Out back were the access doors to the back of the truck. Those two big lights would come in handy at a night race. 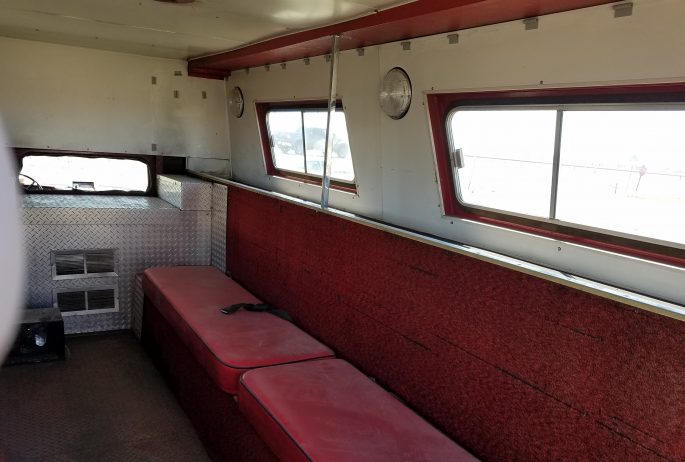 Inside, there was plenty of room to do whatever you wanted. From tool and tire storage, to a camper set up, complete with a bed to forgo hotels, or even make a mobile workshop. The shelves on either side could certainly hold storage cabinets. Under that long bench seat were two massive air tanks. A roof AC would most definitely be in the plans for us. 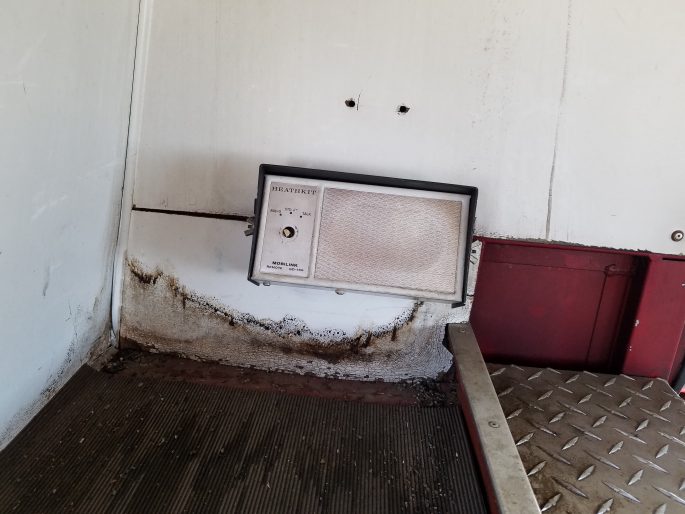 Here is the other end of that ancient intercom box. 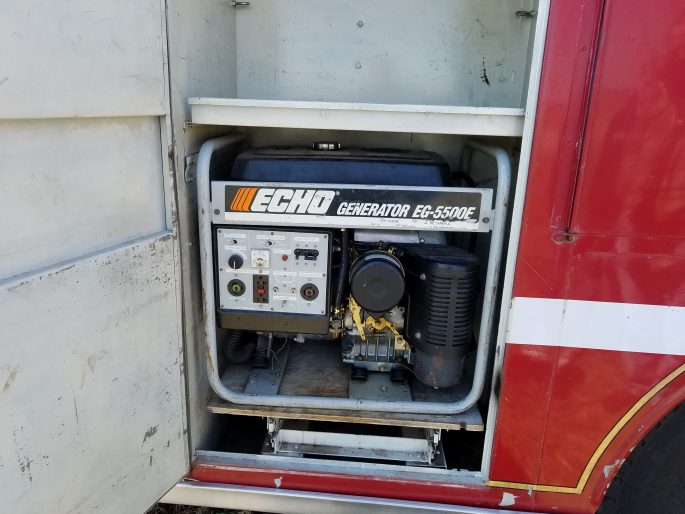 On the other side of the truck, we found a generator already in place. It was mounted on a slide out tray. It isn’t a big one, but will do the job for what we envision. 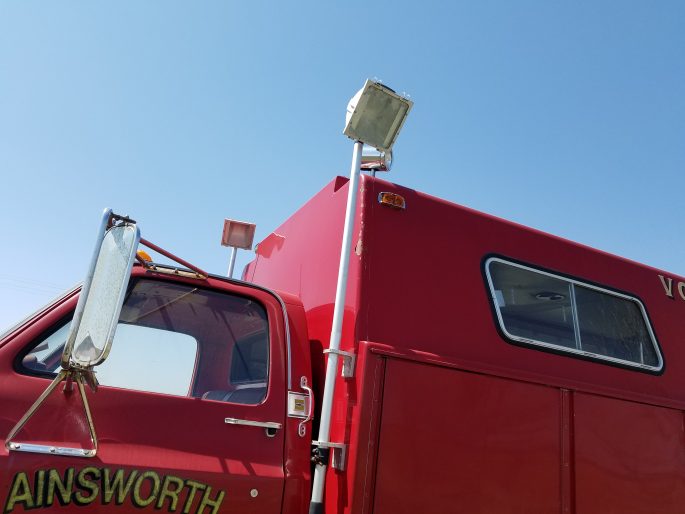 These two remote control flood lights, plus the other exterior lights would provide plenty of night vision at any track.
So, what do you think of our idea? What would you do differently with this truck? Bug out machine, zombie apocalypse truck, camper rig, or soccer mom assault vehicle? Let us know.
Scott Liggett
Morning Symphony: The Sounds And Sights Of What "Maximum Attack" Is Let Nicky Grist Tell You A Tale About Colin McRae: A Trashed Escort And A Sketchy Jump!

2 thoughts on “Roadtrippin’: Seeing Outside The Obvious…Fire Truck Dreams”