Best of BangShift 2013: A 1972 Chevy Ramp Truck That Hauls A Chevelle and Hauls Tail Too! 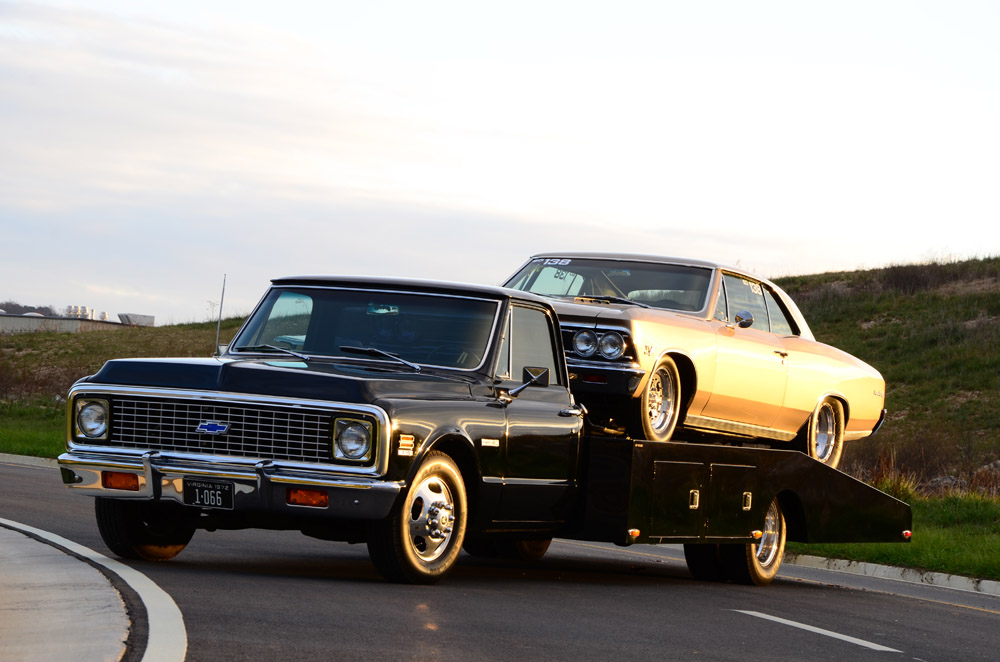 (Words and photos by Tommy Lee Byrd) – Okay, so if you haven’t noticed, we really dig trucks. We like bigger-than-normal trucks and the weird ones too, but sometimes it takes a simple classic truck to sweep us off our feet. That’s where Terry Davis’ vintage car hauler comes into the picture. We spotted this thing from a mile away, mainly because it was toting a flawless ’66 Chevelle drag car on the back, but it’s hard to look past a super clean towing monster doing its thing. It sure beats a late-model diesel truck and an enclosed trailer!

The truck is a ’72 Chevy, and it was a pretty cool piece from the factory.  Terry took it a few steps further by completely restoring it, but the coolest aspect of the truck is that he puts it to use on a regular basis. The truck has a 454ci big block, built by Albert Racing Engines, and though it is mild, it provides plenty of torque to get the heavy Chevy down the road.

The home-built ramp bed is 19 feet in length and the bed floor is coated in Line-X. Terry does paint and bodywork for a living and did a superb job straightening the ’72 Chevy body and blasting it with single-stage urethane black paint.

Inside, Terry grips a Corvette steering wheel, and sits in a black houndstooth bench seat. You seriously won’t believe the cleanliness of the interior. The truck has a factory tilt steering column, and a rare dash with a factory tach. Air conditioning is yet another rare factory option, and you can bet Terry uses it when he’s traveling from race to race. He lives in Wytheville, Virginia and usually races at Motor Mile Dragway, Elk Creek Dragway and Bristol Dragway.

As it turns out, the Chevelle we mentioned earlier has a crazy, nitrous-fed SB2 power plant, and it’s one of the cleanest cars we’ve ever seen hit the drag strip. It’s safe to say Terry is very particular about his vehicles, as both the tow pig and the race car have immaculate paint jobs, interiors and engine bays.  Terry says he owes a lot of thanks to his dad “Stick” who introduced him to the old car hobby, as well as his wife Amy for supporting his addiction.

Take a look at the photos and captions, and you’ll see the nicest, cleanest, coolest car hauler around. We might also sneak in a couple shots of the Chevelle for good measure. 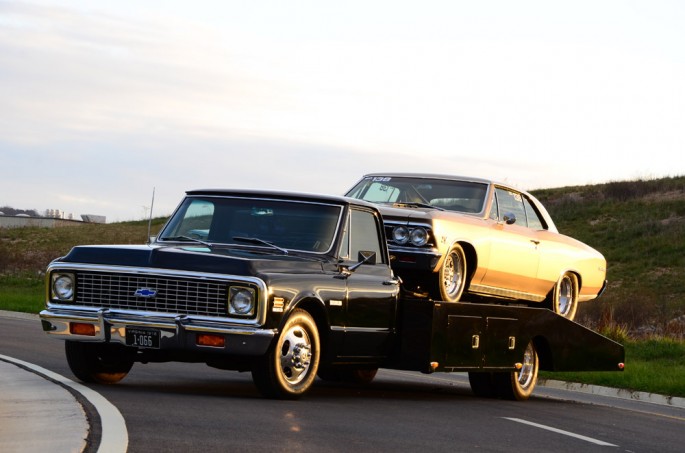 We saw this awesome combo rolling down the road, and just had to grab some pictures of it. The paint job on the car hauler is just as slick as the ’66 Chevelle drag car riding piggy back. 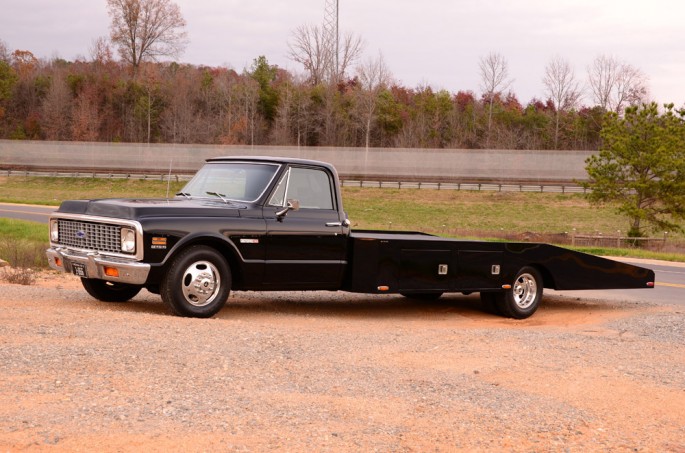 Terry spared no expense when it came to restoring the truck. It has lots of new parts on it, including all of the trim, emblems and bumper. This is what all race car haulers should look like! 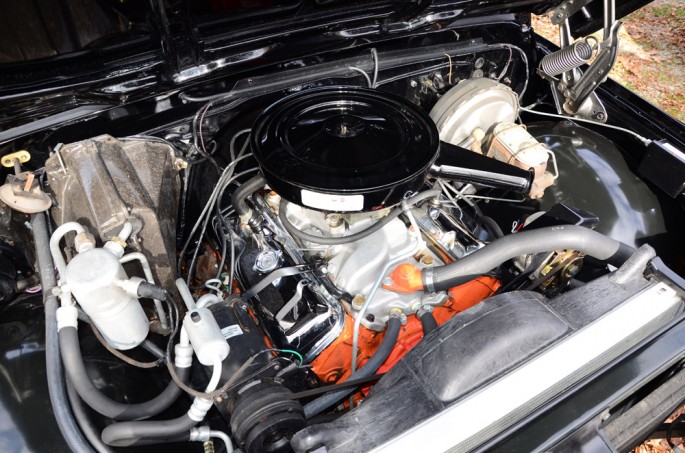 Under the hood is a 454, which is mostly stock aside from an aluminum intake and Holley carb. It’s a workhorse and has served Terry with lots of dependable miles. 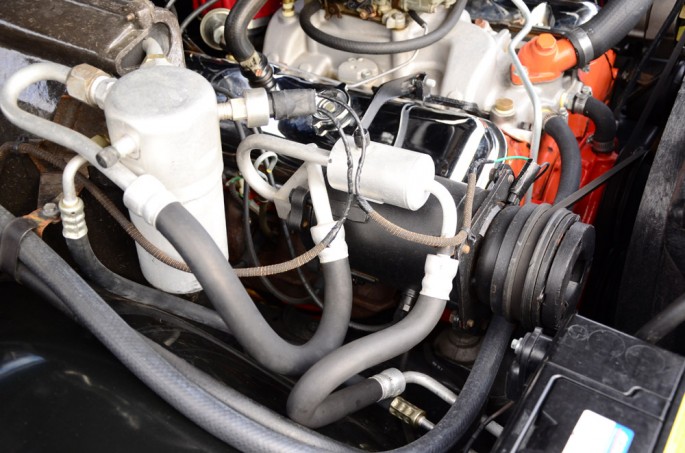 Check out the maze of factory GM air conditioning hoses, lines and wires. 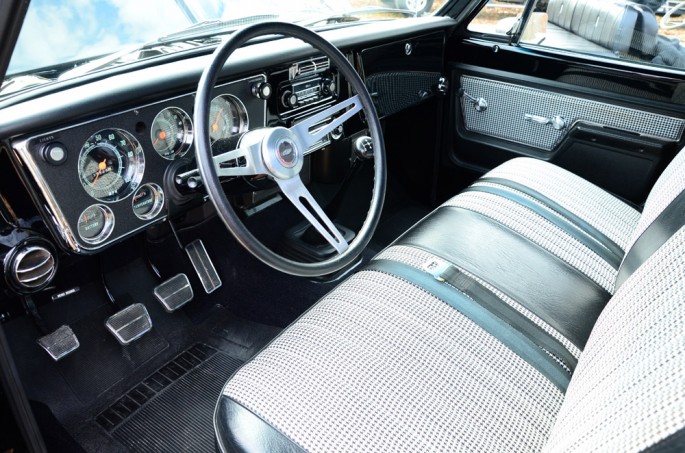 Black and white houndstooth interior is a perfect fit for Terry’s car hauler. We don’t see any candy bar wrappers, empty water bottles or Cheetos bags in the floor, so it’s hard to believe this truck gets regular use. But it does, and that’s what makes it cool! 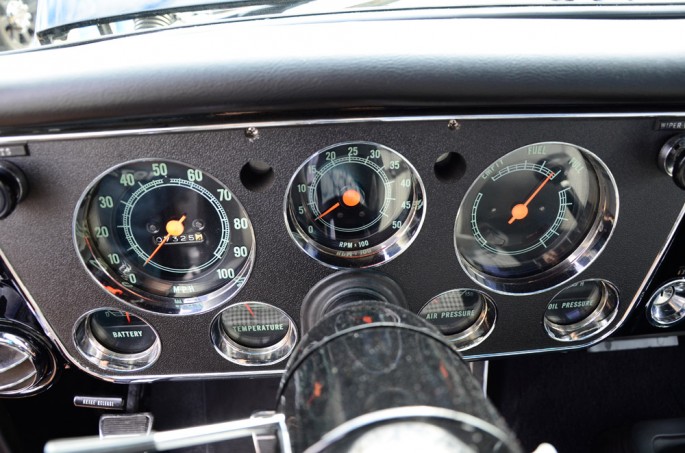 How about a factory tach? It’s a rare option and highly coveted item in the ’67-72 Chevy truck world. 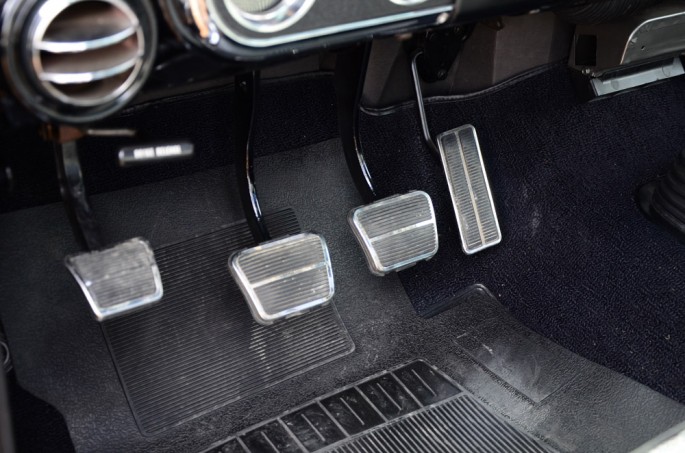 Three pedals get plenty of use in Terry’s truck. While most of the truck remains vintage, he did replace the trans with a NV4500 five-speed. 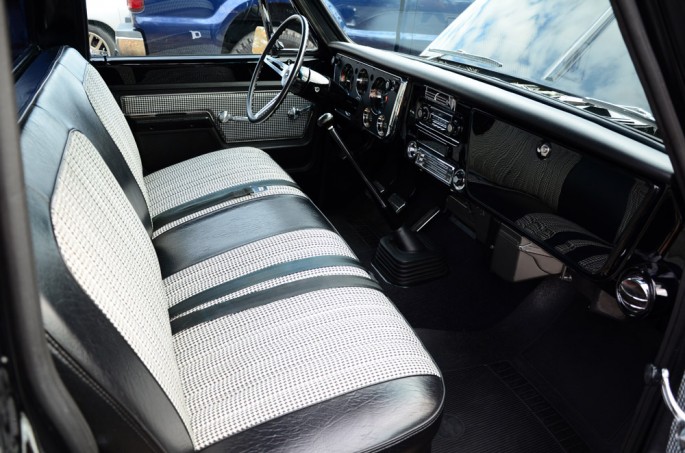 Another view of the super clean interior reveals the original AM radio and the original controls for the air conditioning. 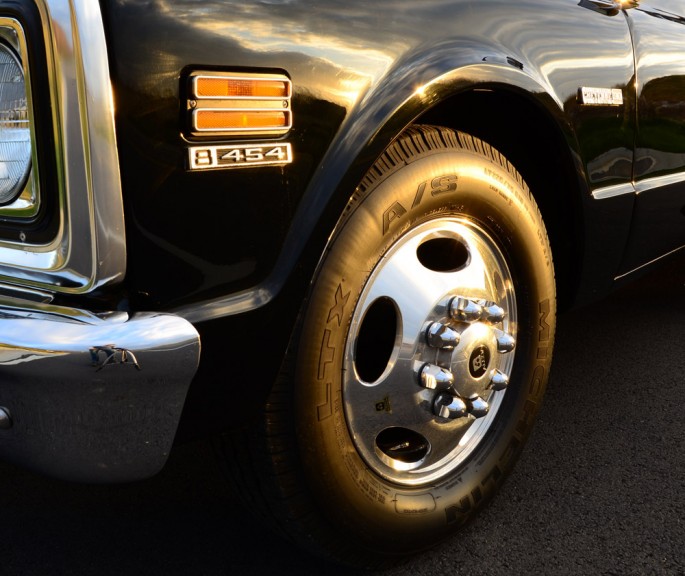 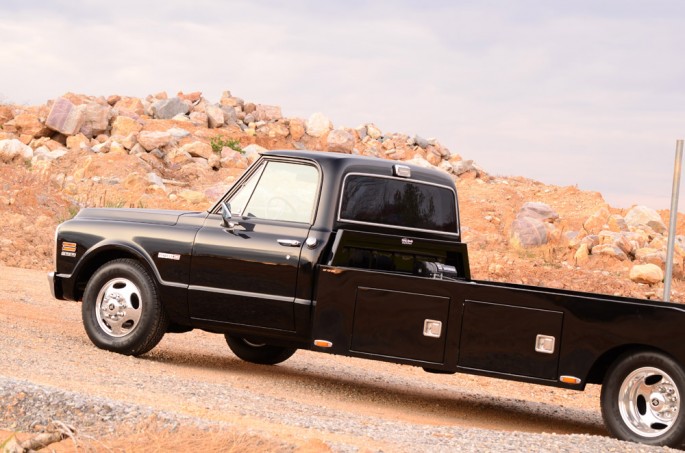 Two tool boxes inside the custom 19-foot bed offer plenty of storage for Terry’s racing weekends. An electric winch makes easy work of getting the Chevelle loaded and unloaded. 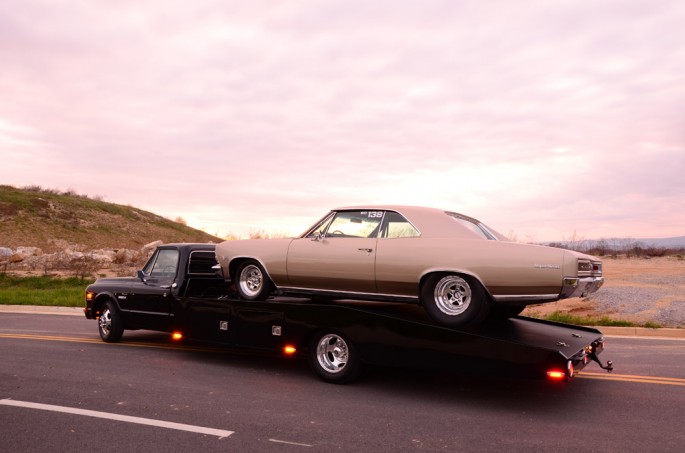 The complete package is definitely an eye-catching combination. 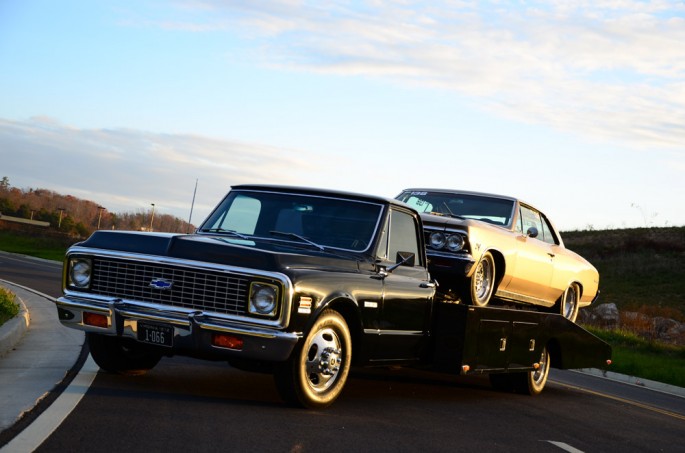 You just won’t find many drag racers that take the old school approach to hauling their car. Terry gets major kudos for his incredible effort! 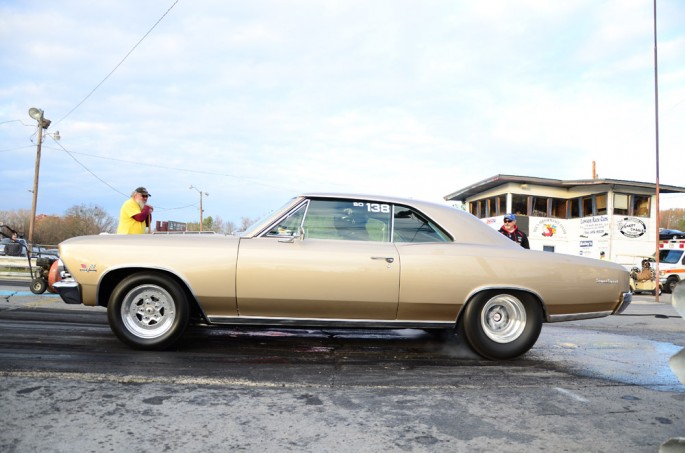 Okay, so here’s a shot of his Chevelle in action. It’s set up for eighth-mile racing and generally runs in a local 5.70 index class. Just like the hauler, Terry’s Chevelle is spotless. 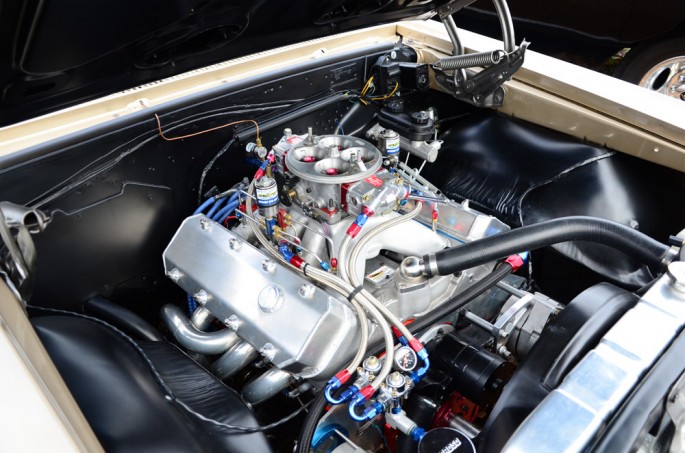 The Chevelle is powered by an SB2, built by Albert Race Engines. It makes serious horsepower, and uses a small fogger nitrous system to propel the all steel Chevelle into the mid-5’s in the eighth mile. 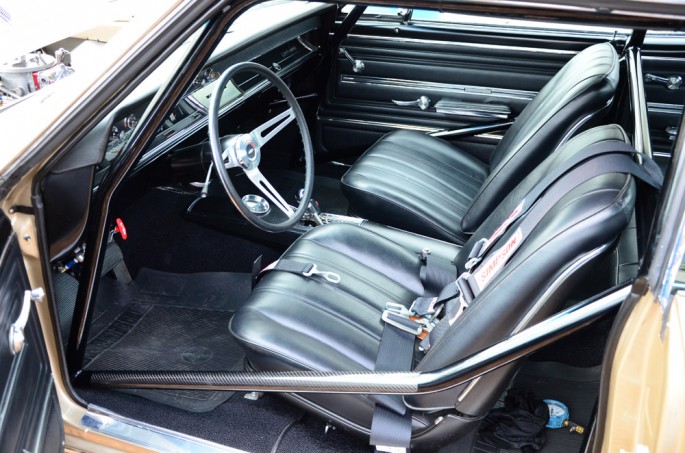 This has to be the nicest drag car interior on the planet. If it wasn’t for the cage and the racing shifter, this interior would be bone stock.. 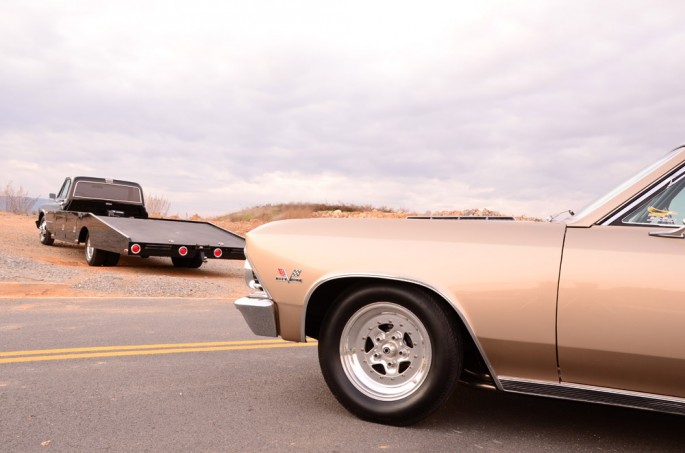 The result of all of this? WE WANT A RAMP TRUCK BAD!