Giant Six: Watch This 2,894ci Waukesha Gasoline Engine Fire Up And Rumble With The Help Of A Pony Motor 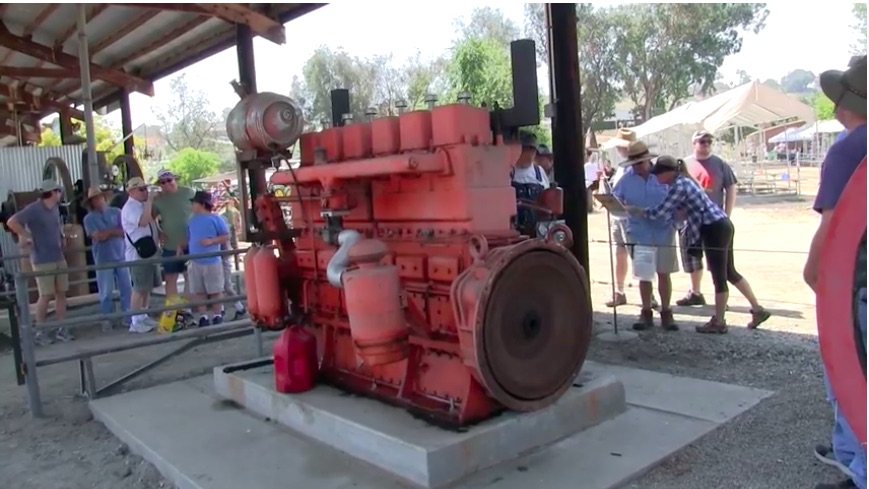 Now THIS is a big block. In this video you are going to see a 2,894ci Waukesha six cylinder gas engine get fired up and running with the aid of a little four banger pony engine. We’re going to take a shot in the dark and say that the pony engine is one of the 173ci flathead four mills that Waukesha was producing at the same time as these monsters. It would only make sense that they would spec their engine to start…their engine. The real story here though is the four ton lump of iron that rumbles to life.

This model was sold by Waukesha as “The Giant Six” and its intended usage was for electrical generation, logging, oil field work, light railway power, and for industrial and stationary machinery power. Making 350hp and 1,600 lb-ft of torque, the thing had a peak RPM of 1,100 and a recommended steady state operating speed of 850rpm. Some of the dimensions are staggering.

The bore and stroke? 8.5″ x 8.5″. That’s just shy of 500ci per hole. The connecting rod length center to center? Just shy of 18.5″. The intake valves were 3.25″ and the exhaust valves were measly 2.75″. The engine used seven main bearings, had removable sleeves, and as you can see each cylinder had an individual head for maintenance and service purposes. Imagine how much an integral single head would have weighed!

Talk about service. When Waukesha was marketing these engines they offered single or dual magnetos and in the literature told potential buyers that the magnetos would be installed and timed free of charge for the customer. That’s big of them, eh?

A huge and historic engine that wouldn’t make a sound if not for the buzzy little ‘banger bolted to it. How cool!

Press play below for your moments of Internal Combustion Zen today –

In Car Collection: This Video Is Awesome In-Car Runs From All Different Styles Of Drag Racing, Radial, Pro Mod, Eighth and Quarter Mile! Two Minutes of Cringe: This 1980s Thank You Video From Pontiac Fiero Plant Is Hilariously Weird

2 thoughts on “Giant Six: Watch This 2,894ci Waukesha Gasoline Engine Fire Up And Rumble With The Help Of A Pony Motor”