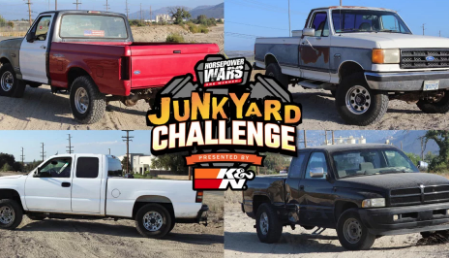 The Horsepower Wars Junkyard Challenge presented by K&N is the ultimate test of 4 man teams in an effort to build the ultimate low buck off-road machine. Each team has been given $2,500 to buy a truck, $2,500 in Summit Bucks, and $1,000 in cash to try their hand at building a bad ass off-road truck that can handle four different competitions in pursuit of the $10,000 cash prize. Yep, the winner will not only take home their beast of a machine, but also get to put $10,000 in their pockets. All four teams are taking a different approach, using totally different platforms, but the one thing they all have in common is an absolute passion for playing in the dirt. Which team does it best will be evident at the conclusion of each event.

And when we say event, we mean four fun and wild tests of man and machine. Some physical, some mental, some both. This is going to be a spectacle, but not before each team takes their shot at building the ultimate off-road truck.

Yeah, these guys have to take their junkyard truck, build it in just a few days, and then race it whether they are really ready or not. And some were not! The builds happened in the California desert, not in some clean and fully equipped shop, and the teams were required to bring everything but a welder and plasma cutter. Those were provided by the guys at Miller. So the fabrication and fun all happened in the dirt, outside, and when they were done the testing and racing began. Below are the first two episodes of the show with two more coming tomorrow and then the final episode coming next week. You are not going to want to miss this.