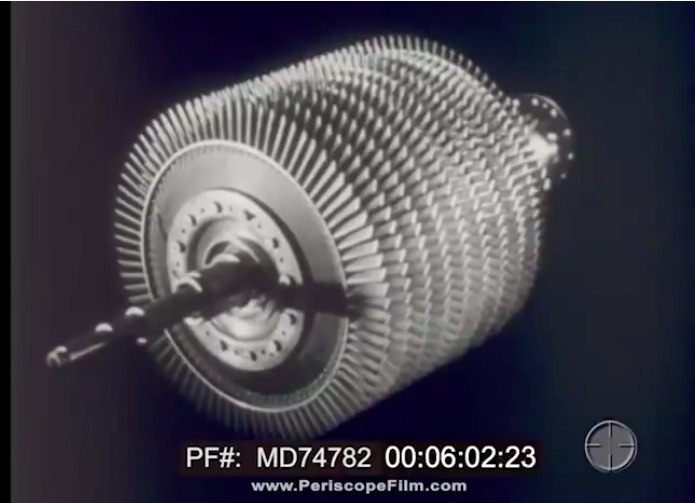 While theory and ideas that make gas turbine engine function have long been known by humanity, it was really little more than 100 years ago that people had the means to make them into anything that was capable of doing work. Like so many mechanical technologies, World War Two drove the advancement of gas turbines into another realm. The British and Germans arrived at the point of having a functional, compact, powerful turbine at about the same time and by the end of the war the turbine was actually used on the ME262 airplane, but that is another story for another day.

This film, made by the Shell Oil Company is interesting because it was made in the 1950s about 10 years after this technology was really found to be useful and like all things, especially in America, when something is new it is destined to change the way we live our lives. You’ll see turbines used in power generation, turbines on a prototype 707 aircraft, turbines in boats, and of course, experimental turbine cars. Why would Shell Oil make a film like this? Because those little turbines LOVE to burn petroleum based fuel.

We all know the reasons why turbine powered cars failed, one of them is the fact that they just cannot get the mileage of their piston driven brethren. Ships and aircraft are another story and the fact that they are prime movers doing a lot of work makes the fuel expenditure a little more palatable.

Bottom line is that this is an awesome look at how the hype of the turbine was in full swing back in the 1950s. There’s also some good tech here as well in terms of how the engines work and the theory behind their function.