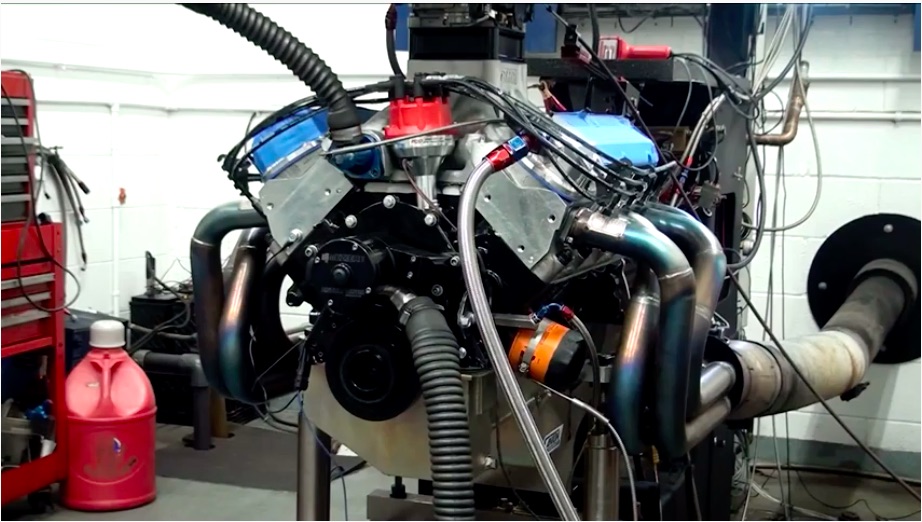 Scott Shafiroff is a guy who’s well know among drag racers and in the drag racing world because of his stellar career and because he has built one of the premier engine houses in the sport. This is a guy who moves a lot of engines and does so in a variety of forms. Sportsman racing engines, nitrous stuff that can get sprayed like Godzilla, street engines, 632s for bracket cars, and the list goes on and on and on. He’s got a production line style operation and with that he has multiple dyno cells to make sure when an engine is done, it’ll perform as advertised and intended with the customer. Rather than check out the bigger end of the cubic inch scale, let’s watch and see a Ford small block get in on the fun.

This is a 445ci naturally aspirated engine with 15:1 compression, a Dart SHP block, 15-degree Brodix heads, a Molnar rods, Manley crank, and a COMP roller billet camshaft. Obviously, there’s more to the puzzle than this but those are the basic parts and pieces. Ah, there is also a BMP Dominator intake on top of all of it as well.

This is a sportsman drag racing engine, not one designed to be cruised around. As such and with the heads, cam, and intake as they are, this 445ci engine makes it’s 845hp at 7,000 RPM and peak torque of 645 lb-ft at 6,400. Pretty nasty stuff wrapped in a naturally aspirated package!

Press play below to see this 845hp small block roar on the dyno – Ford power!