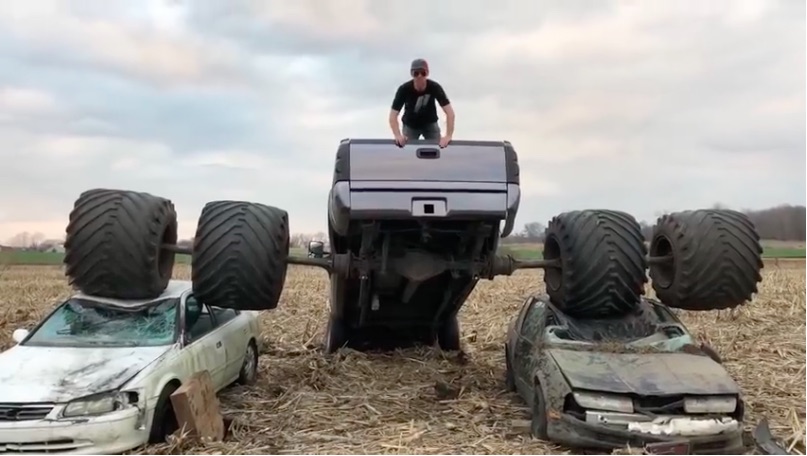 A few weeks back we showed you a farm built truck that was using huge tires off of a piece of agricultural equipment, four foot wide wheel adapters, and a whole bunch of laughs to survive. The thing died a crunching, awful death just trying to drive around the field of a farm and we figured that was the end of that. Turns out we could not have been more wrong.

The nice Duramax truck that all this stuff was bolted to go repaired, the boys went back into the barn with the welder, and what we have ended up with now is the world’s widest dually truck. All four of the massive tires are on the back with the little stockers on the front.

Why do this? To crush cars, of course!

A couple of sad sack junkers were procured and dragged into the field (one after hilariously throwing the rods out) and positioned so that this ungainly Goliath could attack them. As you can see from the lead photos, this whole program is shockingly successful. After the abject failure of the first attempt at mere driving the thing we figured this idea was doomed from the start. Not so much.

The wildest moment in the video comes when the truck is pulling off the cars. The whole “spaghetti axles” part of the title becomes very, very true. We literally have no idea how this thing did not come apart but it didn’t and holy cow is this a fun video for a Friday.

Flowmaster FlowFX Line Expands To Include New Silverado, Jeep TJ, and Challenger with Active Exhaust Got Skills? Watch This Bulldozer Operator Stack Tires Around A Stake Using The Blade Of His Machine