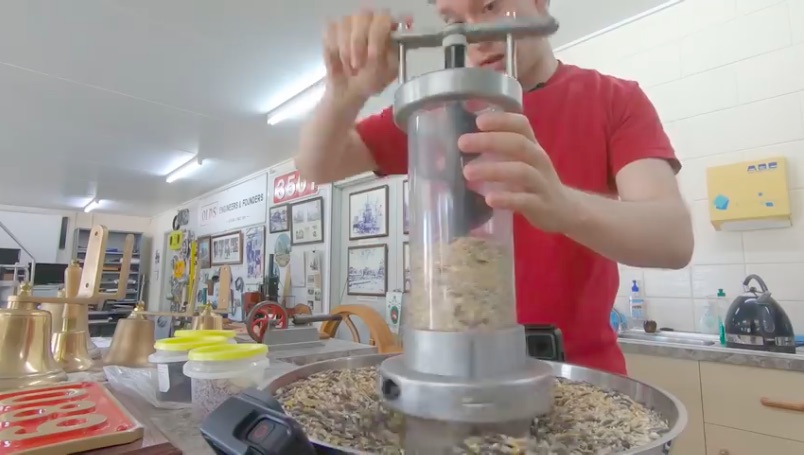 In these trying times we often see widgets and think, “why didn’t I think of that?” Maybe it is some little device to make cooking an egg easier or some way to install your socks without having to bother to bend over. Very rarely today do we see things that are of a significant mind bending mechanical nature emerge. Why? Well, simply put millions of people have been working for hundreds of years to invent, refine, and create things. The most major lesson you need to take from this story and video? There ARE new ideas out there and you never know where they will come from.

The Olds elevator comes from the tiny and humble Olds Engineering shop in Australia where its leader, the elder Peter Olds designed it. For many years, screw elevators have been used to carry materials vertically in plants and in mechanized environments where the job needed doing. The concept is simple, a vertical screw turns and carries the stuff up its back. Easy peasy, right? Like anything else there are some drawbacks but overall it is a tried and true design.

Peter Olds is the first human on Earth that we know of , anyway, to take the concept and alter it. He decided to fix the screw and turn the collar that surrounds it rather than the screw itself. It sounds like it would never work but what’s actually true is that it works far better than using the screw for the motion in the process.

Sounds confusing? It is not. This video tells the story, introduces us to Mr Olds and revels in the fact that this invention is something a guy in Australia thought up in the 21st century, not someone in Samaria during ancient times. Amazing.

Thanks to Bobby J for the awesome tip on this one!

For $1,500 This Hard Top Camaro Is A Runner You Could Do Awesome Stuff With! Devil's Lake Speedway In North Dakota Is For Sale - Beautiful Place, Cool Track, Neat Tractors!