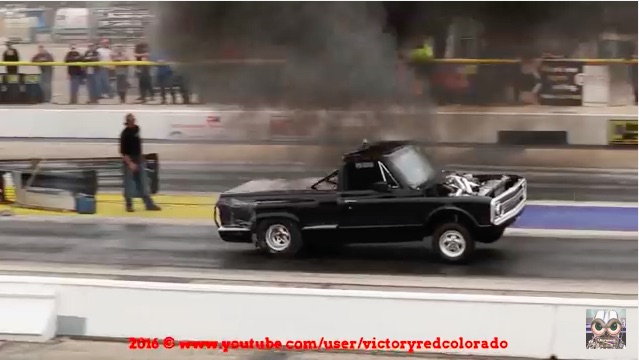 (Video credit: VictoryRedColorado Youtube) – The world of diesel performance is pretty fascinating. Obviously diesels are internal combustion engines like gas burners are but there are certainly major differences in design and construction that dictate how hot rodders go about making power with them. Take this awesome truck for example. Using a triplicate of turbos, all feeding into each other to compound their boost pressure, likely multiple CP3 fuel pumps to jam as much diesel into the motor as possible, and we’re going to say some nitrous to get the whole party started and keep it lit, the Duramax powered 1969 Chevy shown here is a real runner.

All of those parts and pieces come at a price, though. Weight. As we saw in the video about the massive Wagler Duramax yesterday, diesels are really heavy. On the plus side it means that they have anvil like parts in them that can handle enormous loads story. On the downside, overcoming all that weight means that getting the whole package moving really take a lot of UMPH. This truck has plenty. You’ll see the driver spool the turbos, creating enough soot to block out the sun, stage the rig on a bump box, and then let off the transbrake for a torquing, left wheel up launch.

This racer’s goal is to eventually run in the 7s. He does not do it here but some 8 second passes are shown, including one where a fuel line blows off and a fire breaks out. The fire is not like a full barn burner but it is enough that the guy has gone and pulled the truck down to be serviced, fixed, and prepped for next year.

In terms of hot rodding diesel engines, we’re still in the pretty early stages. 15 years from now we’ll look back at these days in the same way we look back 15 years from where we are now with cars. This truck is bad ass and it sure is fun to watch!