Cool Video: The Time That Bigfoot Crushed Two Other “Monster Trucks” – The Dodge Wouldn’t Give! 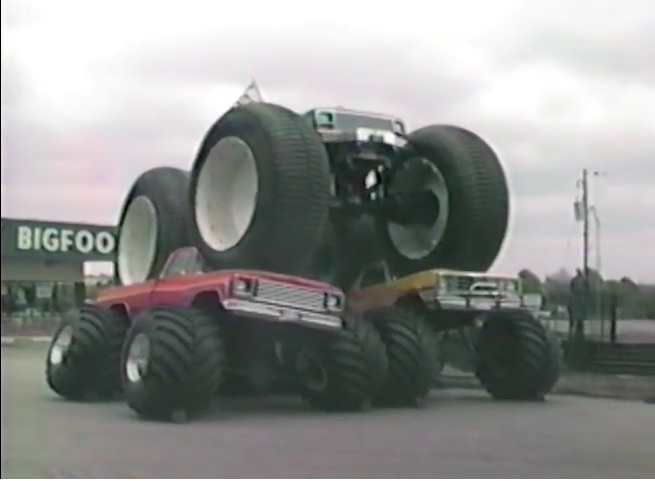 We’re back with a little more Bigfoot goodness from back in the day today. One of the neater publicity stunts that Bob Chandler, Jim Kramer, and the mad cap wacky dudes at Midwest Four Wheel Drive Center pulled off was setting up a scene where a 10ft tall tire equipped Bigfoot could actually drive over two other “monster trucks”. We’re throwing the quotes in not out of disrespect but because these were not actually functional monster trucks but a pair of full sized, steel bodied mockups. The reality is that if you drove the big Bigfoot over a pair of real monster trucks, the huge axles under them wouldn’t give a crap that the thing was up there and the “dismount” would not be pretty. That being said, that’s an entertaining part of this video.

You’ll see Jim Kramer pull up on the backs of the trucks and the dummy suspension folds like toothpicks, just the way it was designed. As Kramer pulls over the roofs of the trucks (which had to have just felt GREAT all the way up there) the Chevy does its job and the front gives way, settling the whole nose of the rig down. Unfortunately whoever built the stuff under the Dodge missed the memo about having it break away easily. Kramer repeatedly rocks the truck onto the nose of the Dodge both illustrating his driving skill and the fabrication skills of whoever “built” that truck.

It eventually breaks but you can see that it took way more persuasion than anyone figured it would.

Yes, it is a slow, lumbering climb but it is pretty impressive to see that huge ass truck perched atop the other “monster trucks”. Neat!

Fresh Batch: Dodge Has Announced A New Run Of 2021 Hellcat Durango Production - Get Yours! Surprise Reveal: Honda Releases a First Look At The 2022 US-Spec Civic Before It's Officially Revealed